A Sighting in the Wild

Forgot to mention . . . While we were in New York City, I had my first live sighting of my book in the wild. This was in a Borders bookstore on Broadway near Wall Street, and it was a small thrill. 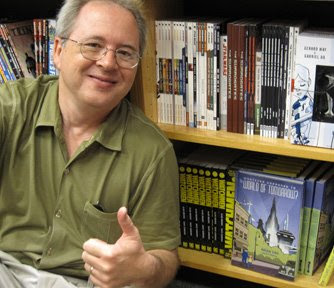 Right now, it seems that some bookstores have WHTTWOT and others don't. One clerk gazed into her computer and told me to come back in July. Most good comic book shops seem to be on top of it. I dropped by my publisher's office unannounced Monday morning (Karen and I found ourselves with a few hours to kill in Manhattan) and had a nice impromptu meeting with Publicist Amy about timing, reviews, strategy, etc. Basically, I just need to chill. It's a marathon, not a sprint, and things are looking fine.

It did not occur to me until now that a book whose title starts with "Whatever" would end up on a shelf next to Watchmen, any more than I realized that a book titled Mom's Cancer would get shelved alphabetically next to Maus. A total but welcome coincidence. Just as coincidentally, my next book will be titled Diary of a Wimpy Kia (it's about an underpowered but lovable compact car).

There's this . . . thing . . . some writers do. When you find your book in a bookstore, you're supposed to ask the staff if they'd like you to sign it. Then they put a little sticker on the cover that reads "Signed by Author," supposedly making it a more attractive product. Some writers are gutsier than I am. For instance, you can't walk into a bookstore within 20 miles of my hometown without finding cartoonist Stephan Pastis's signature inside every Pearls Before Swine collection in the place. As viewers of my webcast learned, Mr. Pastis is not a shy man.

Me, I'm just afraid the clerks'd say, "Uh, no thanks." What do you do then? Could you imagine the humiliation of turning and slinking out the door after that? I can--everytime I find my book in a store.

A real temptation, of course, is to sign the thing anyway and slip it back onto the shelf, a happy surprise awaiting a lucky buyer. This is where the line between "autographing" and "vandalizing" eludes me. How would anyone know it was me and not some stupid jerk (but perhaps I repeat myself)? Could you go to jail for getting caught signing your own book?

What I often do is slip the book out of the shelf and leave the cover turned out into the aisle, like the one above. I imagine the next passer-by picking it up--"Hey, this looks good!"--and carrying it as if hypnotized to the cash register. Ka-ching! But even at that, I feel a little naughty. I feel bad for the clerk who bends down to put it away 10 minutes later. I feel bad for the books being covered by mine. What if I cost someone else a sale? The guilt nags long after I leave the building.

I'm pretty sure Hemingway had the same problem.
.
Posted by Brian Fies at 4:55 PM

Glad you caught your book "live!"

I'd never considered an artist or writer would be shy about offering to autograph their work before. I suppose I might act the same way (assuming I went through the toil of writing/illustrating a book and getting it published, of course.)

One last thing- is it my imagination or are there some cameos in WHTTWOT?

I went to the Borders in Scarsdale a couple of days ago and their computer said it would be out July first. I told them they were mistaken (wish I'd known that Manhattan one already had it on display.) They had to order it. I pick it up tomorrow. So excited to have it in my hands and put my bookplate in it!

You shouldn't have put your picture on the dust jacket. We could have all gone into bookstores around the country announcing that we were Brian Fies and wanted to autograph our books.

And can you, can you imagine fifty people a day,I said fifty people a day walking into a bookstore, signing a half dozen copies of "Whatever Happened to the World of Tomorrow" and walking out? They might think it's a movement. And it is!

Oh, there are several cameos in the book, Namowal--some of them no one but me would know, others more recognizable. For example, my wife, girls and I just happened to tour the Perisphere at the World's Fair (p. 18) the same time as my characters.

Ronnie, I really appreciate your enthusiasm and hope my book doesn't disappoint. Thanks so much for buying it; let me know what you think.

Mike, it might even be the World of Tomorrow Anti-Massacree Movement. This time with four-part harmony and feeling.

Your scheme could actually work. Pastis told me that of all the times he's walked into a bookstore and asked to sign his books, no one has ever asked to see his I.D.

Charlie talked me into putting my picture on the jacket. I wasn't really keen on the idea, and you just provided a perfect example why.

Yep, I caught the cameo at the Perisphere. Good one!

As for offering to sign books, the more I think about it, I can't imagine why you'd be turned down- a signed book is worth more than an unsigned book. (In my opinion anyway.)

Or you could always slip a signed bookplate into each copy (without attaching it) you find...

Y'know, maybe we can't (or at least shouldn't) all go in and sign Brian's name inside his books at our local bookstores ... but we certainly *can* go in and turn them around so they're facing front, as he has done in his picture!

Hi Brian
I finally got my hands on a copy at Sophia Books in Vancouver. They just got three copies a couple days ago and I got the last one. They are ordering more today. I have to try to keep it pristine, as it is going to my friend for his birthday which is coming up next week. I have to wait for my own copy to come in before I sit down for a serious read. How exciting. It looks beautiful and I cannot wait to read it.

Namowal, check out the picture on the magazine at the bottom of page 120: "We're looking for people who like to draw."

Spotted that one too, Sherman!
Did Brian say anything about Clark Kent being one of the passengers on the train? Because that's who it looks like.
The Mariner spacecraft makes a subtle reappearance near the end. Not sure if it's intentionally hidden or my eyes are getting bad...

Hmm, now I just need to hunt you down and get an autograph...

Nancy, you're going to get us all banned from every bookstore on the continent.

Sarah, you're a sweetheart. Thanks. I always appreciate a good story that ends with a bookstore selling out of my book.

Namowal, I don't want any trouble--especially with other people's copyrighted characters, if you know what I mean. Let's just say that in one of his very first stories, Superman captured a vicious gangster and saved Lois Lane at the New York World's Fair. I figure Lois and Clark had to get to the fair somehow . . .

Didja notice the Evil Dr. Xandra on the same train?

The Mariner craft at the end isn't supposed to be too hard to see, but it is very, very dark in deep space.

In general, I don't want to give away my hidden goodies. They're more fun to discover, and the more obscure the more fun, I think. Happy to confirm, though.

Nat, dude. Thanks. If you ever visit again, you'll see I mentioned you in a later post. Get a shave.

Brian,
Wow, your book is beautiful, and I wish you would have signed those in NYC (confuse 'em--is THIS the author's autograph???). Warm wishes to you all,
Lydia (Nat's mom)

Thanks, Lydia! I appreciate your visit to my blog very much. Good boy you've got there.