In the Wild with Goddard

Over on my book's new Facebook Fan Page, I've been having an unexpectedly good time compiling photos people send me of WHTTWOT "in the wild"--that is, pictures of my book perched on people's bookshelves, propped up next to indifferent cats, etc. (send me yours!). Although there are only eight photos so far, and one of them is mine, it's cool to see some of the places the book has gotten to.

The consensus seems to be that the photo below is the best of the bunch, and, with utmost appreciation for the others, I agree with the consensus. 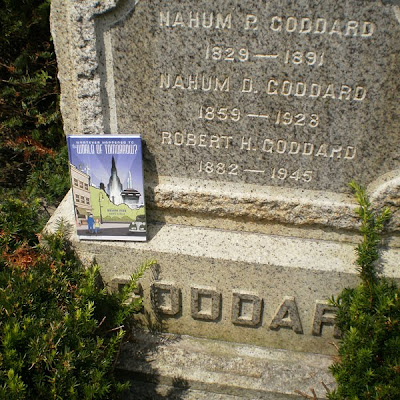 Jim O'Kane was searching for the grave of rocketry pioneer Robert Goddard in Worcester, Mass., and I guess happened to have WHTTWOT in the car with him when he found it. Goddard has been a scientific hero of mine since I did a report on him in junior high school. He was both a solid theoretician and old-fashioned hands-on experimentalist who built liquid-fueled rockets in the 1910s through '30s long before anyone else saw any reason to.

Goddard also took a memorably unfair beating in the press. In a scientific paper published in 1920, Goddard described a design for a rocket and, as an aside, speculated that someday such devices might be able to travel to the Moon. Well. The New York Times mocked him mercilessly for not knowing that a rocket couldn't travel in the vacuum of space because its exhaust would have nothing to push against--an exactly backwards misunderstanding of Newton's law of action and reaction--and concluded that he lacked the most basic scientific education "ladled out daily in high schools." Although anyone who mattered knew that Goddard was right and the Times wrong, he never really got over that insult (and plenty of others like it from reporters eager to make fun of the Moon Man) and withdrew from public view while continuing to develop the science and engineering of rockets. The Times' cute apology to Goddard after Apollo 11 landed on the Moon came 24 years too late. He died in 1945.

As I mentioned on the photo's Facebook caption, opening this picture from Jim took my breath away for a second. I don't mention Goddard in WHTTWOT--his real pioneering work was done before my story opens in 1939--but his influence runs all the way through it. We can add my book to the long, long list of things that wouldn't have been possible without him. Jim's picture means a lot to me. 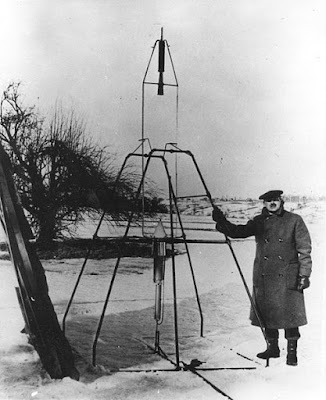 Probably the most famous photo of Goddard, with
a rocket fueled by gasoline and liquid oxygen in 1926.
.
Posted by Brian Fies at 9:06 AM

Email ThisBlogThis!Share to TwitterShare to FacebookShare to Pinterest
Labels: Getting the Word Out, Space

Now I'm curious about where MRS. Goddard might be, the woman behind the man -- the one who made him sandwiches, edited and published his writings, and actually took most of the historic photographs of him (including the one you've posted here, I believe). He seems to be buried with his father and grandfather ... where are all their wives? Hmmm. I think a trip to Worcester is in my future.

She's got a footstone there, too. Apparently it's just the Goddard Men who received the marquee treatment.