'Trivial' is Too Strong a Word for this Post 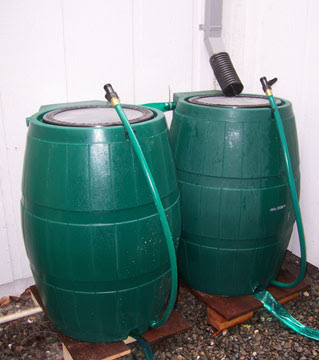 Today, I doubled my liquid empire. It's raining now, and I expect the second barrel (on the left) to be full by morning (it's connected to the first barrel by the green hose visible at the top rear, so that when the first is full the overflow pours over to the second). Tomorrow, I may break out the shovels and begin digging my own 20,000-gallon cistern. This notion of hoarding a valuable resource gathered from thin air (literally!) is seductive. And it's a lot less work than panning for gold.
.
Karen and I saw "Slumdog Millionaire" today and enjoyed it. I won't bore you with a review, just wanted to mention that I was struck by how audience members might experience the film's climax differently depending on whether or not they know a particular bit of literary trivia. Or, like a gentleman in our audience, think they know it but don't. Boy, was that guy surprised! I can't remember another movie that leaves different parts of the audience in different emotional states based on the knowledge they walked in with, even if only for a minute. Anyway, "Slumdog Millionaire" earns my humble recommendation, for what it's worth.
.
Not a lot new on the World of Tomorrow front. The files are all with the printer and I expect to see proofs in the next week or two. That'll be the first real test of whether some ideas that sounded very nifty in theory actually work in reality. We're trying some unusual things in this book; I expect adjustments to be made. Meanwhile, Designer Neil and I are working on the book's back cover, while Editor Charlie comes up with copy for the flaps and back. I think it's all coming together great!
Posted by Brian Fies at 5:17 PM

Email ThisBlogThis!Share to TwitterShare to FacebookShare to Pinterest
Labels: Friends Family and People, Making a Book

Early in his adult life, my granddaddy was an IRS agent working in the hills of rural northern Georgia. Your setup is starting to look like something that would have drawn his attention.

Ha! I know what you mean. My freshman dorm roommate built a still in his closet and fermented a trash can full of corn mash under my bed . . . which I didn't really object to, until the day the mash built up enough pressure to explode all over our room.

That must have been some monster mash. (Just followin' along on your recent theme of old song titles...)