Resolving the cliff-hanger we left on yesterday, today's Sixty-Second Sticky Doodle talks about the often-misunderstood art/craft of inking, an important part of the traditional cartooning process.


And here's the completed doodle: 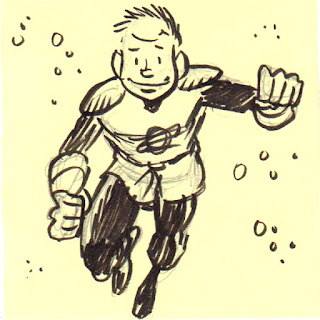 Today's Sixty-Second Sticky Doodle is part one of a two-parter, describing the two-part process of penciling and inking. It's also a two-parter because there are some things that even I just can't finish in a minute.

It's been said* that some people can read War and Peace and come away thinking it's a simple adventure story; others can read the ingredients on a chewing gum wrapper and unlock the secrets of the universe. Today's Sixty-Second Sticky Doodle looks at a brick wall.

Today's Sixty-Second Sticky Doodle asks two important questions: who's the best copilot in the entire universe, and who owes some kid out there $10 for selling him a terrible drawing? Answer: Chewbacca and me.

What better to doodle at the unofficial start of summer than snow? As I try to show in today's Sixty-Second Sticky Doodle, sometimes the best way to draw something is to draw nothing at all.


Snow by Bill Watterson. Notice how he omits even the panel borders to make the snow extend beyond the edges of the page. Wonderful. 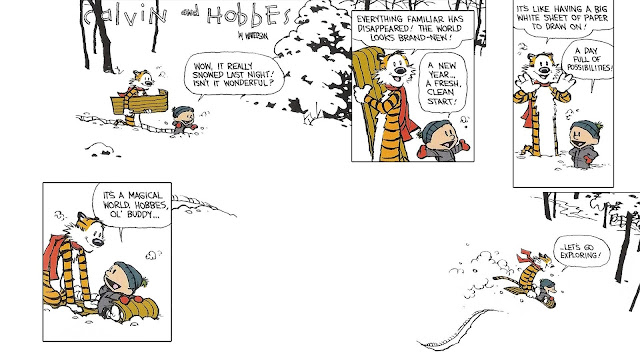 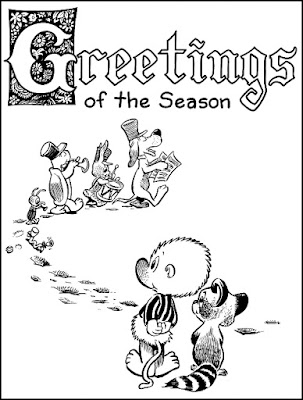 Twain in the Sandwich Islands 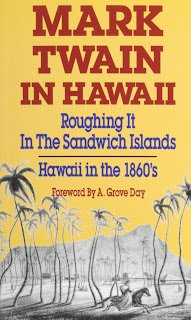 Longtime friends and readers know I love Twain (Mark, not Shania, although she's OK too). I just finished reading his Letters from Hawaii, a series of reports he wrote for the Sacramento Union in his early thirties before he'd become a literary big shot.

Twain was about as fair-minded and humanitarian a writer as you'd find in the mid-19th century, but read from 150 years later he's still pretty racist. Not a criticism--he was a man of his time, not ours--just an observation. He's quite pro-colonialism and pro-missionary, seeing them as having saved the native Hawaiians from their benighted savage ways. Even when he's complimentary to native people or culture, it's in terms of their simple innocent naivete.

At the same time, he acknowledges that something very precious has been lost, and mourns the ancient paradise corrupted by commerce and Christianity. I was reminded of present-day people who moan, "Oh, Hawaii is ruined now, you should have seen it in the 1960s!" According to Twain, it was already mostly ruined by the 1860s (just as Italians have been complaining that tourists have ruined Venice since at least the 1700s).

Still, Twain is Twain. Nobody else would write: "At noon I observed a bevy of nude native young ladies bathing in the sea, and went down and sat on their clothes to keep them from being stolen." Or: "...the red sun looked across the placid ocean through the tall, clean stems of the cocoanut trees, like a blooming whiskey bloat through the bars of a city prison..." That's good stuff.

A note on the edition I read, pictured here. I bought it cheap: cover price $5.95 marked down to $3, and I barely got my money's worth. It was bad, with transcription errors and chopped-up paragraphs. This particular book was poorly put together and I don't recommend it, which is too bad. One of the beauties of old public-domain work is that it can be republished inexpensively, but it still ought to be done right.
Posted by Brian Fies at 4:31 PM 0 comments

When I was a kid, THIS was the Marvel Cinematic Universe:

Yeah, the color marker smudges up the ink at the end. Please enjoy this Sixty-Second Sticky Doodle anyway! And if you have Golden Poppies in your yard like I do, please enjoy them, too. 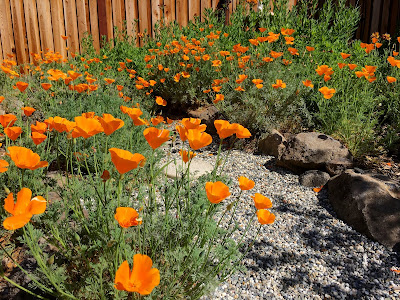 Ad astra per aspera! Every space hero needs a spaceship, preferably one trailing sparks and smoke. This is mine. From Whatever Happened to the World of Tomorrow, today's Sixty-Second Sticky Doodle is an old-timey rocketship.

Today's Sixty-Second Sticky Doodle is admittedly rough. Sketchy. Unfinished. Such is the nature of a doodle. That's why it's called a "doodle" instead of "oil painting that I carried around Renaissance Europe for 20 years while I finished it." Are you ready, kids?

Avast! Want to become a famous artist and get rich drawing turtles in turtlenecks, partying mice and fierce pirates? Today's Sixty-Second Sticky Doodle shows you how, and I won't even charge you $5000 for it. Arrrrr!

Ending Perspective Week (not a moment too soon!) on the Sixty-Second Sticky Doodle drawing some skyscrapers, with a glimpse at the end of how crazy this stuff can make you if you're not careful. Thanks for hanging in there, we'll be back to normal doodles next week!


Here's a look at the pencil sketch for that futuristic city drawing, which shows my construction lines for three-point perspective a little more clearly. 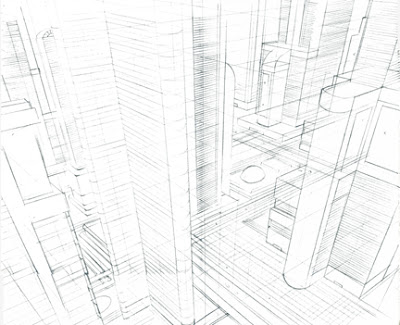 This is the finished version, with ink drawn over the pencil lines: 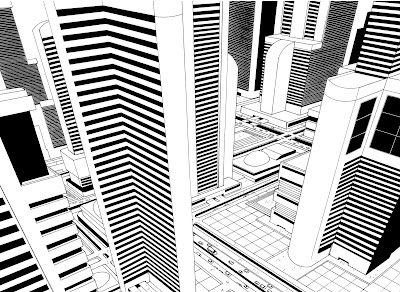 And these are the two places I used it in Whatever Happened to the World of Tomorrow.... 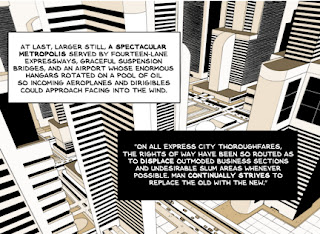 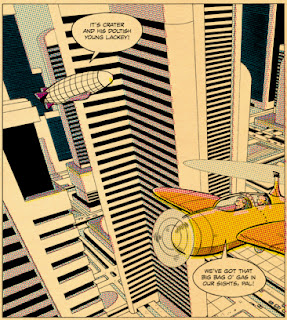 OK, time to get serious. A few people have told me that they or their kids have been following along with my Sixty-Second Sticky Doodles trying to draw what I draw. They send me photos of their versions of daffodils and Gerties. THANK YOU! That's wonderful and makes me very happy!

But some of those same people say that they're frustrated because I go so fast and their drawings don't look like mine. Perspective Week is being especially tough for them.

This may sound odd, but I never meant the doodles to be tutorials. If I were really teaching you how to draw things, they'd be 10 or 20 minutes long instead of 1. Also, some of these are hard for ME, too! You just don't see all of my practice and failed attempts.

If you're serious about drawing what I draw, don't even try to go as fast. Take your time! If it's not fun, skip it! And if you really want to learn perspective, consider these doodles a quick introduction and go find better resources. Here are two I found online from Hello Artsy and Rapid Fire Art. Also, my friend Mike Cope has a wonderful series of how-to videos for younger artists.

Perspective Week continues on the SSSD! Now that we've all mastered one-point perspective, it's time to take our game to the next level: TWO-point perspective! Ka-pew! I can hear minds blowing all across the Internet.

Today, as demanded by absolutely nobody, I begin "Perspective Week" on the Sixty-Second Sticky Doodle! If that doesn't sound like a good investment of one minute per day, come back next Monday. Everyone else will be drawing like Leonardo daVinci by Friday.

Kids love Garfield, and he's a great example of solid character modeling and design. I try to explain why on today's Sixty-Second Sticky Doodle.

Kind of a companion piece to my earlier doodle of trees, today's Sixty-Second Sticky Doodle is a mountain. Look, they can't ALL be adorable copyright violations!

Karen is All the Agent I Need 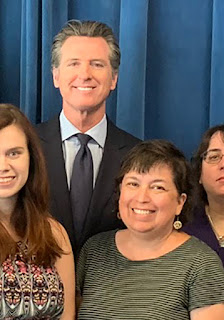 Here's a story I meant to tell a long time ago, with a possible follow-up that happened just this morning....

Last July, my wife Karen was one of many California county officials who met in Sacramento to talk about disaster preparedness. On her way out the door, almost as a joke, I handed her a signed copy of A Fire Story and said, “Give this to the most important person you see.”

Later that day, it’s announced that Gov. Gavin Newsom wants to meet with a small group of those county officials to hear their disaster stories. A list is prepared; Karen isn’t on it. She walks up to the aide and says, “I need to be on that list.” The aide says, “Sorry, the governor only has time to hear from a few people.” “I don’t need to tell him my story,” says Karen. “This book is my story.” The aide looks at A Fire Story and says, “That’s YOU?!” and adds her to the list. And that’s how she handed my book to Newsom, who thanked her sincerely and promised to read it.

That afternoon, Karen called me and said, "Guess who I gave your book to."

Today I'm told that the California State Libraries, in cooperation with the Governor's Office, is putting together an exhibition of books about California by California authors, which will be displayed in the Governor's Mansion and then added to the library's permanent collection. They'd like A Fire Story to be part of it.

I can only wonder, and will never know, if Karen's chutzpah back in July had anything to do with this neat recognition now.
Posted by Brian Fies at 10:23 AM 0 comments

Sixty-Second Doodle 37: A Glass of Water

Weird subject today, but I thought it might be interesting to doodle something simple, like a glass of water. I'm not saying this is the only way or right way, just that drawing the most ordinary things can still give you a lot to think about.

Today, in celebration of Star Wars Day (May the Fourth...be with you), I doodle an Ewok, those murderous teddy bears from a galaxy far far away, and talk about a girl I used to know.

I have good and less-good publishing news today.

GOOD: A Spanish-language edition of "Mom's Cancer" is forthcoming! I've seen the pages and it looks like the translators and designers did a beautiful job, particularly with the graphic elements where text is integrated with the art. I'm honestly surprised there wasn't a Spanish version years ago, but am astonished and gratified that a book that's now about 15 years old still has a lot of life left in her. That's incredibly rare. 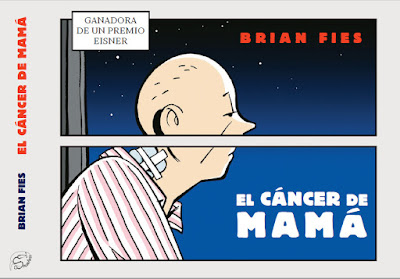 LESS-GOOD: My publisher, Abrams, and I have been working on a paperback version of "A Fire Story," with 32 new pages of art describing our rebuilding process and fleeing yet another wildfire, to be released in the fall. It now looks like Covid-19 has pushed that release into spring 2021.

Here's the deal: the publishing industry releases books in two seasons, spring and fall. Because bookstores are closed, authors can't tour, etc., many of the books that were supposed to be released this spring--right now--are being pushed into the fall. Editor Charlie felt that it would be better to delay my paperback's launch so it doesn't get drowned in the glut of books gushing from the pipeline after the clog is cleared. Besides, there's no guarantee that bookstores will be open by this fall, either!

Compared to everything else the pandemic has screwed up, my book launch is trivial. Abrams's strategy makes sense. But I'm still disappointed.
Posted by Brian Fies at 8:38 AM 0 comments

Today's doodle is an animation pioneer you may have never heard of, Gertie the Dinosaur, by the man that many (me) consider one of the three or four greatest cartoonists who ever lived, Winsor McCay. McCay made a short film with Gertie in 1914, for which he and an assistant did more than 10,000 drawings of Gertie and a full background on sheets of rice paper (since animators hadn't yet thought of using transparent cels over background art). I'm lucky enough to own one of those drawings.

Here's McCay's film, including a little prelude setting up the premise of McCay making the cartoon on a bet.