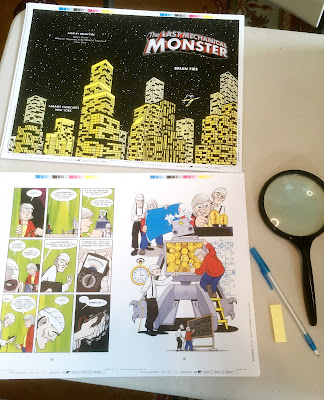 One of my very favorite parts of the publishing process: checking proofs. These are pages of a book printed on the actual paper and press the book will be printed on, mailed to the publisher and author for their approval.

I gather that the industry is moving toward digital (PDF) proofs, which I think are useless. Especially for a graphic novel, you need to see how the images and ink will look on the page, which is very different from how they look on a monitor. You need to inspect the quality of the publishing process itself--are the colors in register (lined up right), are there flecks and specks on the printing plate? A PDF doesn't tell you any of that. As it is, I only got physical proofs for 12 spreads, or 24 pages, so we picked pages that might reveal problems or answer questions, e.g., how does my white lettering on a black background look (the answer: just fine!).

I love proofs because I'm a process geek and because now my book is real. Aside from one hand-bound copy of Last Mechanical Monster I made for Karen, it hasn't been a physical object. Until now. That's neat.

Karen and I are home from a very busy, beautiful long weekend in Oregon's Columbia River Gorge as guests of Hood River Reads, an annual program by the Friends of the Hood River County Public Library that encourages the community to read and discuss a book. This year, they chose mine. The group purchased enough copies of A Fire Story--nearly a thousand!--to distribute them free to the middle school, high school, and anybody who asked. Their one condition: I had to come and talk.

In the weeks before I arrived, Hood River Reads had kicked off the campaign with book club readings, mayoral proclamations, a poster contest, and creative classroom assignments built around A Fire Story. By the time I arrived on Friday, pretty much everyone I encountered had read the book. That's . . . unusual. I've never seen anything like it. The beauty of the Columbia River Gorge, the passion and kindness of the Friends of the Library, and the library and town of Hood River itself made for an exhilarating few days.

Here's all you need to know about the place and people: when we arrived, they had a gift box waiting in our hotel room, and among the many books and snacks in the box was a jar of homemade jam.

The Friends chose A Fire Story partly because the area has faced terrifying wildfires itself, most recently the Eagle Creek Fire which, like our Tubbs Fire, hit in the fall of 2017. We saw its scars on the drive east from Portland. No lives were lost and property damage was light, but the 48,000-acre fire burned for three months. The kids remember it, the adults will never forget it.

I gave three talks on Friday: a workshop for a library full of middle school students, a lecture for an auditorium full (200-plus) of high school students, and a workshop for a combined art and creative-writing class at the high school. My last three talks happened at the downtown library. I gave two on Saturday: a workshop for the community, attended by about 15 prospective (or at least curious) writers and cartoonists, and a community lecture on graphic medicine suggested by a Friend who'd read Mom's Cancer. On Sunday afternoon, I gave a concluding community lecture in which I made the case for literary graphic novels and tied my fire experience to theirs to talk about readiness and resilience.

Six talks in three days is a packed schedule, but between events Karen and I were treated to convivial meals and had time to explore the area, including a drive to the snow at the foot of majestic Mount Hood an hour away.

As is my way, I'll tell the rest of the story with pictures. Many thanks to our hosts--Laurie, Bonnie, Bill, Helen and others--as well as the librarians, teachers, and spouses involved in making us feel as welcome as could be. They're wonderful book-loving people (the best kind!) who live in a wonderful place. Thank you for inviting us up.