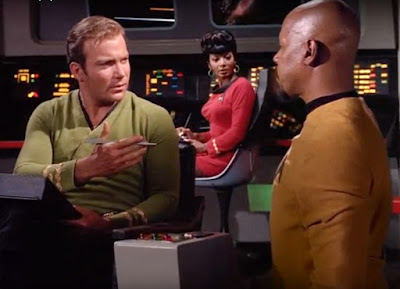 A Facebook friend messaged to ask more about my experience pitching stories to Star Trek and why I never wrote about it. First, I did write about it--14 years ago! Whatayawant from me?! Mostly, I don't think about it much because it was a long time ago and I failed. I never sold Star Trek a story. But I learned a lot that's stayed with me in all my subsequent work, and that's what's got me revisiting it now.

Backstory: Star Trek was unique among TV shows in that it accepted story ideas from the public. Nobody else did or does that. Producer Michael Piller started the policy and it opened the door for a few writers who went on to great careers. In the sixth season of Star Trek: The Next Generation, I wanted to be one of them. I wrote two scripts, filled out the release forms, and sent them off. A few months later, I got a call: Star Trek couldn't use either of my stories, but they showed enough promise that they invited me to come in and pitch more.

Over the years I pitched probably 40 or 50 stories to a half dozen different writer-producers. Most couldn't have been kinder or more sympathetic. They were all young and remembered being in my shoes. There was only one who I thought was kind of a blockhead, but maybe that was me. I was a bad pitcher. I took too long to get to the point. A pitch should grab the listener in the first sentence; I spent the first two minutes winding up.

I wish I knew then what I know now, because I would have crushed it. The paradox is that I wouldn't know what I know now if I hadn't made those mistakes then.

I only remember one of the stories that piqued their interest and got me in the door. This was in the early '90s, when the dissolution of the Soviet Union was still fresh. One thing that intrigued me about the USSR's break-up was that not everybody wanted to leave. I'm thinking of little countries like Estonia, in which (as I remember it) a significant portion of the population said, "No, we're good, thanks!" I thought that was fascinating.

So in my story, for reasons I don't recall, the Klingon Empire is giving up control of a planet it had conquered 200 years earlier. Klingons being Klingons, they'd strip-mined the world of anything valuable and left it a polluted wasteland. Captain Picard and the Enterprise show up to help the natives transition to their new freedom and are surprised to find themselves fighting an underground movement that doesn't want it. They've been part of the Empire a long time; though not biologically Klingons, they are socially and culturally. It's all they know. 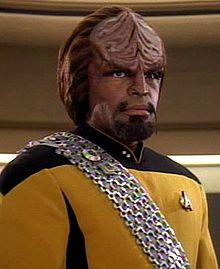 My story was very Worf-centric. He was the bridge to help these folks see that you could keep what you liked about being a Klingon, rediscover your own forgotten heritage, and still be welcome in the Federation. At the same time, the situation brought up a lot of conflict within Worf, who (as I'm sure you all know) was adopted by humans and never really felt like a full-fledged Klingon himself. So it was a look at his Imposter Syndrome against this political allegory that Star Trek always did so well.

The producers said they liked it because it focused on Worf, and they always wanted to find more for him to do. They liked the allegory. A flaw in the story is that, although I did try to develop Worf's character, it was still about the Enterprise showing up and solving a planet's problems, a trope that everybody was tired of at that point.

What I didn't realize until later was that it also would have been impossibly expensive to shoot. My story would have required several new sets and probably some alien world exteriors as well. As I got more experienced, I tried to offer more "bottle shows" that took place entirely on existing sets. Those are money savers that always made them happy.

I think the closest I came to a sale was with Deep Space Nine. DS9 was a space station on the rough frontier of Federation space commanded by Ben Sisko, who had been an officer on the starship Saratoga until it was shot out from under him by the evil Borg in a battle that killed his wife Jennifer.

In my story, it's a few years later and Sisko is hosting a reunion of some of his Saratoga crew on DS9. The story's about veterans returning home from war, transitioning to civilian life, dealing with PTSD. One of Sisko's best buddies arrives with an ulterior motive: hijack the station's tough little battleship, the Defiant, and go back in time to stop the Borg from destroying the Saratoga. Sisko's duty-bound to stop him but deeply conflicted. This isn't like killing Hitler and changing centuries of history in unpredictable ways. The Borg battle just happened a few years ago. Surely a chance to save thousands of lives is worth rearranging the recent past? The story ends as it must, with Sisko and company sitting in the cloaked Defiant watching the Borg cube fly by on its way to kill Edith Keeler--I mean, Sisko's wife--and blow up their beloved Saratoga.

The producer liked it a lot. He said, "I'm going to hold onto this one. We're working on another story that's similar, but if we don't do that one we might do yours."

Months later, DS9 aired the episode "Trials and Tribble-ations," in which a disgraced Klingon spy hijacks the tough little battleship Defiant and goes back in time to stop Captain James T. Kirk from uncovering his plot to poison a grain shipment that millions of tribbles gorged themselves on. Combining the modern DS9 cast with old footage of the 1960's cast, it was a love letter to the original series on its 30th anniversary and one of Star Trek's best episodes.

As a minor footnote, it also ensured that no one would ever again hijack the tough little battleship Defiant to go back in time and try to change the past.

Even as a failure, my experience pitching stories to Star Trek made me a better writer. I realized that the stories they quickly rejected focused on some science-fiction high-tech premise or plot twist, while the stories they liked focused on the characters. If I said something like, "Captain Picard faces a crisis that takes him through an arc from A to B," I had their attention. I had to be hit over the head several times to realize that a good story isn't about spaceships or aliens or ripples in the fabric of space-time, but about people.

That sounds obvious, but I realized how unobvious it was as I talked to friends and family who couldn't wait to share their story ideas. And literally without exception, every idea I heard from someone else was about a spaceship, alien, or ripple in the fabric of space-time. Not one that I recall even mentioned a character, how they'd react to the situation, or how they might be changed by it. Once I learned to see it, it was striking.

Another lesson learned: ideas are common. What matters is execution.

More than once, I got two sentences into a pitch and had a producer stop me: "We started filming an episode like that this week." And sure enough, months later I'd see the episode and think, "That's my story!" except I never had a chance to tell them my story and no one ever heard it but me. No matter how outlandish the idea, even in a fantastic sci-fi universe where almost anything can happen, it's probably not as original as you think. What makes your idea different is what you do with it. How you express it. The unique twist or flavor you bring to it.

I learned that the stories most worth telling are the ones that nobody but you could tell.

I learned that stories are often not about what they seem to be about. Good stories have subtext that strikes a deeper chord with an audience even if they don't quite know why.

These were lessons I internalized as best I could and took into my future writing. I often fall short but they're always in the back of my mind. They're also qualities I look for in other people's writing.

I think readers and viewers like to see a writer's mind working. They enjoy making connections and solving puzzles that a writer leaves for them to find. They respond powerfully to authenticity: an audience can tell when a writer is telling the truth or making stuff up. When people tell me, "I like the part in your book where . . ." it's always a part where I took a little risk and tried to be as honest as I could.

I'm pretty sure those lessons are correct. Failing to write for Star Trek helped me learn them.


Keep in mind that I've only seen the first episode of the new Star Trek "Picard" series and don't plan to pay to see the rest. But I read the synopses and reviews, and see the reactions of my friends who seem pretty evenly split about it. Also, I've been a fan of "Star Trek" as long as there's been "Star Trek."

And I'm sad to say that it's lost me.

At its core, "Star Trek" was aspirational. It said that people could get smarter and better, and build a tomorrow that's better than today. Oh, we had to go through a Third World War to get there, but when we finally set aside prejudice and hate we could make Earth a paradise. "Star Trek" argued that humanity was perfectible.

For at least the last 10 or 20 years, "Star Trek" hasn't believed that. From what I read and hear, "Picard" certainly doesn't.

That optimism made "Star Trek" unique in mainstream science fiction. Take it away, and it's just another gray and gritty "Blade Runner" "Planet of the Apes" "Firefly" "Battlestar Galactica" "Expanse" "Dark Matter" Et Cetera Et Cetera dystopia in which humanity is awful and the future is terrible. Some of those are excellent stories. But they're not "Star Trek."

As a writer, I understand why dystopia makes an attractive storytelling sandbox. I get why actors would be interested in playing in it. It's probably even more honest; I don't actually think we can make Earth a paradise within 200 or 300 years.

But wouldn't it be lovely to try? To imagine it might be possible?

Strip away "Star Trek's" optimism and it becomes ordinary--indistinguishable from all the other TV shows and movies about people in clanky spaceships eking out miserable lives and little Pyrrhic victories against the overwhelming forces of oppressive darkness. And much, much less interesting to me.

I'm tired of cynicism. It's laziness disguised as sophistication. These days, I think the bold, daring, groundbreaking choice is sincerity and hope. That'll set you apart! It used to set "Star Trek" apart.