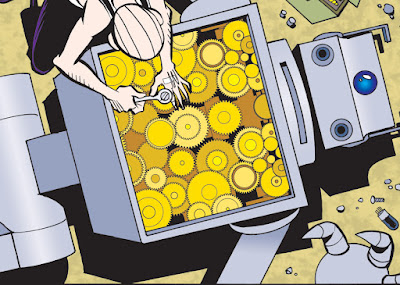 I had a comment/reply on my "Last Mechanical Monster" webcomic, currently running on GoComics.com, I thought was interesting enough to share. (Background info: my story is a sequel to a 75-year-old Superman cartoon.) A reader questioned a drawing in which I showed my Robot full of gears, saying gears'd be too heavy and slow. My reply is a good example of how I approach a story:

"(That's) something I actually spent quite a lot of time mulling over before I even began 'The Last Mechanical Monster': How does the Robot work? I thought hard and seriously about it for some time, drew a lot of diagrams, and decided it simply can’t, especially with a mostly hollow chest cavity (as shown in the Fleischer cartoon). There’s no way to attach the arms, no place to put a motor for its neck-propeller, no room for an engine or batteries, etc.

"Basically I had to decide if I was telling a science fiction story or a fantasy story (I think it’s fair to say Superman himself could go either way), and the total impossibility of the Robot convinced me I was writing fantasy. If this were science fiction, I wouldn’t have filled his chest with gears; since it’s fantasy, and I thought gears looked cool and fit with some themes I develop later in the story, I went for it.

"Think of the gears less as a way to move a robot and more as a metaphor to reveal a character."
Posted by Brian Fies at 1:19 PM 0 comments