An Evening With Brian Fies?! 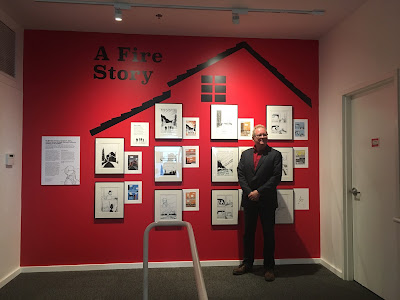 I had a tremendous time last night talking at the Cartoon Art Museum (CAM) in San Francisco, which everyone should visit often.

I had no idea who would show up for "An Evening With Brian Fies." Turns out about 20 folks, including comics greats Trina Robbins and Steve Leialoha; cartoonist, professor, and my friend Nick Sousanis; Association of American Editorial Cartoonist stalwart Scott Burns; and the person who animated my Fire Story webcomic for KQED and won us both Emmy Awards, Farrin Abbott.


My daughters Laura and Robin were there. CAM's Summerlea Kashar treated us to dinner. Curator Andrew Farago graciously introduced me and came with his wife, cartoonist Shaenon K. Garrity, and their son Robin (who enjoyed meeting my Robin). CAM's Nina Taylor Kester cracked the door open for me (that's a private joke) and made me feel at home. The audience was not necessarily huge in quantity, but Wow what QUALITY!


CAM is a great institution and it's a career highlight to have my work on display there. Visit!
Posted by Brian Fies at 3:40 PM 0 comments

Today Karen and I moved into our new house, rebuilt on the exact site of our old house. It's been 535 days since our house and thousands of others were destroyed in the Tubbs Fire.

We're happy, exhausted, numb, more happy, and can't quite believe it.  It's keen.

Out of 170 destroyed in our neighborhood, we're the fourth to come back. The nights are very dark and quiet. Construction's going on all around us. There's a guy digging up pipe in my front yard right now. We don't care. We're home.
Posted by Brian Fies at 3:29 PM 4 comments 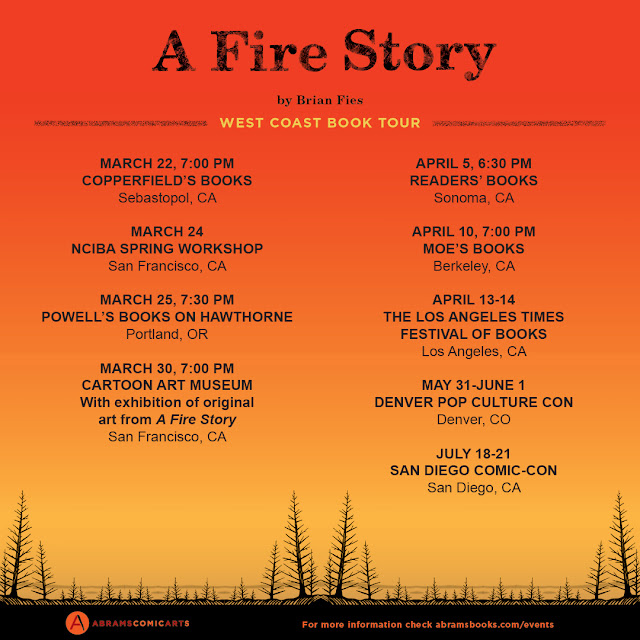 Here's an updated schedule of places I'll be talking about A Fire Story. Two additions:

March 30, I'll be at the Cartoon Art Museum in San Francisco for a talk and signing to go with an exhibition of original art from A Fire Story. Wow! That exhibition is actually on the walls already, we just couldn't schedule the party until the 30th. I haven't seen it in person, but the photos look fantastic! Thanks to Andrew Farago and CAM for the honor.

April 10 I'll be at Moe's Books in Berkeley, Calif., one of the Bay Area's most venerable heroic local independent booksellers. Looking forward to it!

For local folks, I hope to see you this Friday at Copperfield's in Sebastopol, another fine heroic local independent bookseller who's been very supportive of my work over the years.

Thanks for everyone who has come out or plans to come out. I've never really book-toured before; what I'm learning now is that every person who shows up, and every book sold, really makes a difference in how the bookstore and even my publisher feel about the book.
Posted by Brian Fies at 7:54 AM 2 comments

In my last post from my Corte Madera signing, I teased a story about receiving "an amazing gift that knocked my socks off." It's not much of a story because I still don't know much about the gift's provenance except it was handed to me by a man named Steve. Steve made these:

Photos don't do them justice. They're multi-layered cutouts of my art in shadowboxes that gives them an astounding three-dimensional effect. The thoughtfulness Steve dedicated to these, deciding which parts of the picture should be at which level, particularly on the Last Mechanical Monster pic, is very impressive. I have no idea how he cut out the art; I can only imagine him hunched over a board with a scalpel and magnifying glass.

In person, they're breathtaking! Both will have places of honor on my studio wall, as soon as I have a wall.

I don't know Steve. All I could do is stammer out my deepest thanks before he was gone. I hope he sees this and knows how much I love them, not just for what they are but for the time and care he obviously took to make them.
Posted by Brian Fies at 1:40 PM 0 comments 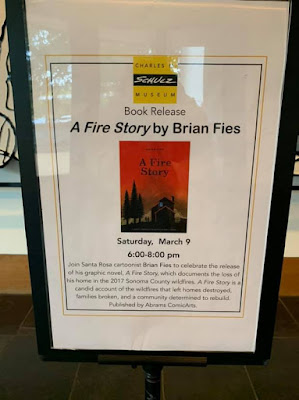 A whirlwind weekend! Saturday night: a spectacular book launch at the Charles M. Schulz Museum. More than 200 people showed up, overflowing the museum's little auditorium and packing the Education Room upstairs, where my talk was simulcast. So many friends, covering every stage of my life: high school, early jobs, cartoonists, new and old neighbors! My family came, including my daughter Robin, who I didn't think would be able to make it and surprised me.
Local independent bookseller Copperfield's brought about 75 copies of A Fire Story and sold out. They also carried Mom's Cancer and Whatever Happened to the World of Tomorrow, which I really appreciated, so I signed a few of those. Other people brought books they'd bought elsewhere. I signed my custom bookplates for people who couldn't get a book but promised they would later.
I spoke for about half an hour, then signed books for more than an hour. Best part was introducing several of the people who appear in the book, who had seats of honor up front. I asked for a show of hands of people who'd lost their homes, then those who had close friends or relatives who'd lost their homes; nearly every hand was raised. It was a hometown crowd of people who'd been through an extraordinary disaster together, very powerful. We cried, we laughed, we cried some more.

Sunday was mellower: a signing at Book Passage, one of the Bay Area's great bookstores, in Corte Madera, Calif. About two dozen people, only a few of whom had direct experience with the fire, with a very different energy, but it was really nice. I like talking to smaller groups (and I've talked to much smaller, like groups of two or three). You can have a conversation.

Two different experiences, both great, that gave my book a spectacular launch. But I've got to say, my night at the Schulz Museum was a special once-in-a-lifetime thrill. Thanks to Jessica Ruskin, Karen Johnson, and Jeannie Schulz for making that happen.
Photos from many sources, including my daughter Laura and sister-in-law Cathy. Thanks again to everybody who helped make this weekend so special!
Posted by Brian Fies at 10:09 AM 1 comments

Some mornings you wake up with no idea what the day will bring. Yesterday around 9 o'clock, an assignment editor from San Francisco KGO TV called me. Around noon, I was hosting a reporter and videographer in our rental. And by 5 o'clock (and 6 and 11) I was on televisions all over northern California. Today looks to be pretty boring in comparison, but you never know.... 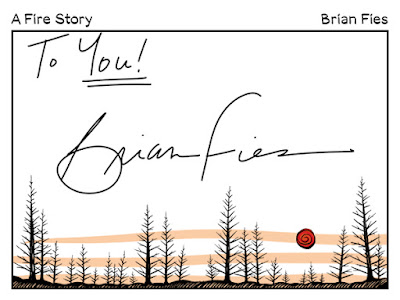 A Fire Story drops tomorrow (although friends are sending me photos of it in bookstores already!), and some people have asked how they can buy a signed copy. Unless you come to a book signing, that's difficult. I don't have a giant crate of books in my garage, nor really want to get into the shipping business. HOWEVER....
I made BOOKPLATES, which I designed especially for A Fire Story, and will happily send free to anyone who asks! A bookplate is basically a sticker that I will inscribe however or to whomever you want, sign, and mail to you. Then you stick it in your book and BLAMMO, signed book! I did this with Whatever Happened to the World of Tomorrow and it worked great.
Email me at brianfies(AT)gmail.com with your mailing address and how you want the bookplate inscribed. Do me a favor and use the Subject Line "Bookplate." I'll send as many as you want, but we're on the honor system here: please don't ask for more than the number of books you have because it comes out of my pocket.
And if someone still really wants their actual book signed, and is willing to pay postage both ways, contact me at the same email address and we'll work it out. But really, a bookplate is even better!
And thanks for reading my book.
Posted by Brian Fies at 8:55 AM 2 comments