Overnight, A Fire Story's sales ranking on Amazon.com shot from something like 58,000 to #175. Television is still an incredibly powerful medium.

Thanks again to the PBS NewsHour crew for their thoughtful work!

PBS NewsHour: The Rest of the Story 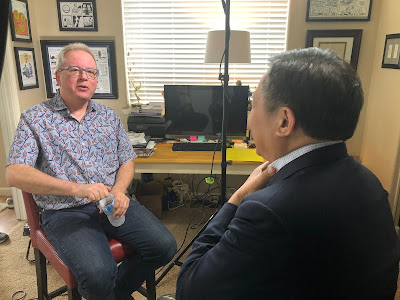 [Newcomers, Welcome! If you'd like to read the original webcomic that I wrote and drew in the days following my home's destruction in California's 2017 wildfires, here's a link. My new graphic novel, A Fire Story, is available from Amazon or your local heroic independent bookseller. Thanks!]


Today, the PBS NewsHour aired a 6-minute feature segment on A Fire Story and me. National exposure on a program like that—by which I mean one watched by smart people most likely to read books—is a big deal!

Here’s how it happened.

Back in March, I got a call from Summerlea Kashar, executive director of San Francisco’s Cartoon Art Museum. She’d been contacted by a NewsHour producer who’d read about CAM’s exhibition of my Fire Story artwork and wanted to drop by the museum to shoot some footage. And, by the way, did Summerlea know how to reach me, and did she think I’d be interested in having the NewsHour come to my house to do an interview?

I began corresponding with NewsHour producer Kira Wakeam and liked her right away. I felt I was in good hands. Viewers probably assume that the on-camera reporter has the most important job, and it is important, but often it’s an anonymous producer who talks to the sources, does the research, and shapes the story before the reporter even shows up.

The NewsHour crew wanted to meet on March 26 and 27—coincidentally, the exact dates Karen and I were moving into our newly rebuilt house. For the TV people, this was a tremendous stroke of good fortune. Our return home, a year and a half after California's largest-ever wildfire destroyed our neighborhood, gave them a dramatic hook to build a story around. For Karen and me, it would be a tremendous pain. We were really truly moving! At its best, moving is hard and exhausting and awful. We’d be doing it while hosting a camera crew.

I told Kira that sounded fantastic. Karen gave me the stink-eye.

Planning was complicated by the fact that I was doing a book signing in Portland, Oregon on March 25, and wasn’t due to arrive home until late on March 26. Some quick reservation juggling by Abrams Publicist Maya, and I was awake in Portland at 4 a.m. to catch a flight that would get me home by mid-morning. So you can imagine how fresh I felt when Kira knocked on my door at noon with correspondent John Yang, cameraman Jason, and co-producer Other Jason.

Here’s the picture: the house is torn up. The garage is a Jenga-jumble of packed boxes ready to be moved the next day. Most of the rooms are empty except the small bedroom I use as an office, which we leave untouched because Kira wants footage of where I write and draw. Karen’s being a really good sport because I’ve just been gone for two days while she packed, and now I show up with four strangers unloading enough video equipment to televise a Super Bowl game.


All the indoor interview footage, plus the bit where Karen and I moved two boxes of pots and pans, was shot the afternoon of March 26. Then Kira, John, Jason and Other Jason went to their hotel, and Karen and I packed up my office and cleaned out the house. It was a long night! Next morning, the moving crew and camera crew showed up at about the same time, so while Karen supervised the movers I galavanted off to shoot all the outdoor footage, making sure to wear the same clothes I had the day before so the shots would match.

Let me emphasize what a really good sport Karen was.


A couple of hours later, the PBS NewsHour crew was on to another Bay Area assignment before returning to Washington DC, and I was in my new house sorting and schlepping boxes into their proper rooms.

Why the three-month delay between shooting and broadcast? No idea. Kira originally thought it’d air in early April, and I know they had it ready a long time ago. But it’s obviously the type of timeless story that can sit on the shelf until your hour-long newscast has a 6-minute hole to fill, and I guess today was that day.

I think the televised piece turned out great. I was apprehensive; I trusted Kira and knew what footage they’d shot, but the trick is how it’s edited to tell a story. They told our story well. The NewsHour folks all impressed me as kind and sensitive people, which wasn’t necessarily what I expected from a national news crew. They could have easily been cynical and arrogant instead of terrific.

Of course, my publisher Abrams and I hope that a lot of people watched the program and said, “Wow, I’ve got to buy that book!” It could be a game-changer for us; it could also be a damp fizzle. I don't try to predict such things anymore. But I very much appreciate Kira discovering A Fire Story and reaching out to see if I wanted to talk about it. Regardless of outcome, the answer to that question is almost always “Yes.”