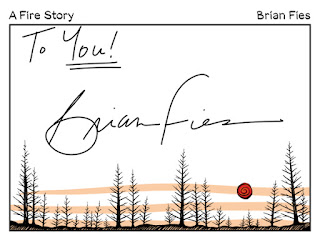 With "A Fire Story" officially out in paperback (updated and expanded!) it's an apt time to again mention that, in lieu of signing books in person, which still feels dicey, I'm happy to mail a free signed bookplate to anyone who asks. For those unfamiliar, a bookplate is a sticker (custom designed and signed-for-real by me!) that you stick in your book, and blammo! Signed book.

I don't need proof you actually bought the book. First, my readers would never lie to me. Second, my autograph is worthless, so you can't flip it on eBay. We're on the honor system.

Just email your address and any inscription you'd like to brianfies@gmail.com and I'll pop one in the post. And thanks! 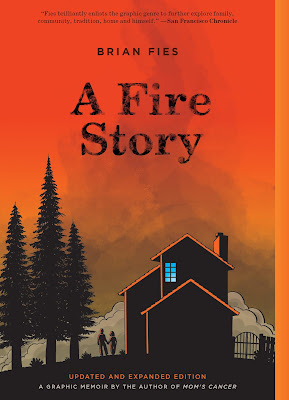 Today is the official release date of "A Fire Story" in paperback, updated and expanded, just like it says on the cover! I can't promise that if you walk into your local heroic independent bookseller they'll have them stacked to the ceiling, but it sure would be nice if you went in and asked. If you already bought the hardcover and wonder if you really need another one, I understand. Just give me a call and I'll read you the new stuff over a cup of cocoa.

The Return of the Last Mechanical Monster 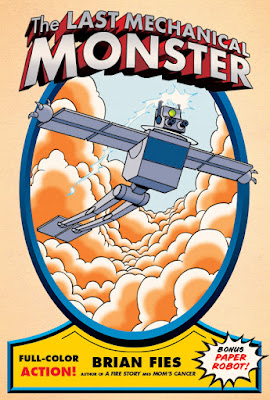 COMING THIS FALL: 192 pages of full-color Eisner-Award-nominated action and adventure! Plus a robot paper doll you can cut out and glue together yourself! It's THE LAST MECHANICAL MONSTER, in hardcover, from Abrams ComicArts!

I began working on LMM about 10 years ago, after Whatever Happened to the World of Tomorrow? was published. After Mom's Cancer and World of Tomorrow I wanted to do something fun and fictional. This is the project on which I spent about a year writing and penciling more than 100 pages before realizing it wasn't the story I really wanted to tell. I turned all those sheets of paper over and began drawing a new version on their backs. I never regretted that "wasted" time because I figured I had to go through that to find the right story I DID want to tell.

At the time, publishers weren't interested. That's fine! I serialized it as a black-and-white webcomic, and it was nominated for Eisner Awards in 2014 and 2015. GoComics.com later picked it up, and after Editor Charlie and I did A Fire Story it came full-circle back to Abrams ComicArts, where it has found a very happy home.

This is the cover, which was just finalized a few days ago. Charlie and I are doing final edits now (Oxford commas, bah!). We'll put it to bed in a couple of weeks, then it's off to the printer and into your heroic local independent bookstores in September.

My fourth book. I really love this story and hope you will, too.