I had a swell time at Saturday's Cartoon-A-Thon at the Charles M. Schulz Museum. Special thanks to museum education director Jessica Ruskin, who worked very hard to pull it off. I got to hang out with friends, many of whom I haven't seen in at least a few years, sell some books, and best of all talk to folks about comics and storytelling and their lives. I think in whole it was a fine celebration of the art, craft, entertainment and importance of cartooning, which I gather was the point. A good day! Here's some pictures.

Email ThisBlogThis!Share to TwitterShare to FacebookShare to Pinterest
Labels: Schulz

I'll be at the Charles M. Schulz Museum next Saturday, helping them commemorate the 100th anniversary of Mr. Schulz's birth and the 20th anniversary of the museum, which I've been a proud member of since it opened. There'll be special guests, fun activities, Snoopy, and more than a dozen cartoonists at tables arrayed through the museum's Great Hall, which is where I'll be.

I've done similar events there before, most recently for the 15th anniversary, and they're fun for both participants and guests. A local bookstore will be selling copies of "A Fire Story" but I haven't decided if I'll sell copies of my other books. I like money as well as any red-blooded American capitalist, but I'd really rather just sit and draw and talk to people about comics than guard a cash box. Maybe I'll bring a few for credit card purchases. I dunno.

I love having this museum 10 minutes from my home. I think it's just the right size and design for its subject: classy, graceful, not too small or big or grandiose. The staff and volunteers are great. Plus it's set right in the middle of the places Schulz worked and loved, his studio and ice arena (although Schulz helped plan the museum, he died before it was built). You can still feel his spark in the place. I've told this story before: whenever I'm working on a story and get stuck, I go to the ice arena's Warm Puppy Cafe--the same place Schulz ate his daily English muffin--buy a basket of fries and a Coke, and sit in that comics cathedral until I figure it out. Hasn't failed me yet.

I love the place and will always do anything I can for it. If you're in the area, check it out.

Email ThisBlogThis!Share to TwitterShare to FacebookShare to Pinterest
Labels: Schulz 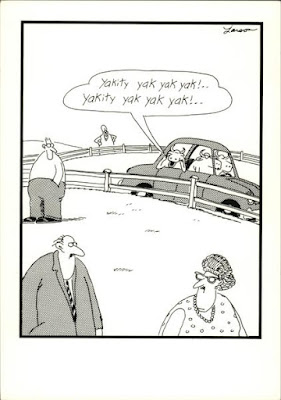 A Peek into the Intimate Intellectual Life of a Long-Married Couple, Part 12:

Karen and I are driving through the countryside and see a large herd of cows.

Brian (in a lovely tenor): "MOOeeeeuuuaaauuuoooOOO!"

Brian: "That's a cow trying to sing 'Oh What a Beautiful Morning' from 'Oklahoma.'"

Brian: "The real question is how a cow would have heard the soundtrack to 'Oklahoma.'"

Celebratory high fives and fist bumps all around.

(Cartoon is "The Far Side" by Gary Larson. duh.)