I'm planning a visit to Quincy, Calif. in the fall because Feather River College has chosen A Fire Story to be its "Book in Common" for the school year! That means it'll be a focal point for campus and community discussion, and basically everybody attending the small-but-mighty two-year institution tucked into the beautiful Sierra Nevada will read it.

Fire is uppermost in your mind if you live in California mountains. The 2018 Camp Fire, which sadly took the title of "Most Destructive Wildfire in California History" from ours, happened in the next county over. Also, the college plans to look at social and emotional issues: community, loss, how we decide what's important. So I'll get to spend a day or two there talking about all those things.

What an extraordinary honor! I will work hard to do a good job.
Posted by Brian Fies at 8:37 AM 0 comments 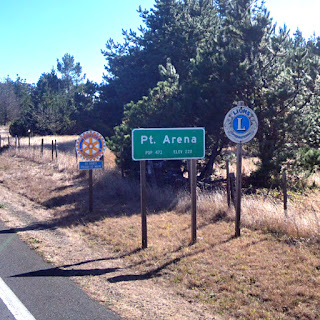 The danger of admitting you've learned something new is exposing your original ignorance. "You didn't know that? EVERYone knows that, dummy!" Everybody's understanding of the world has gaps. I'm always delighted to fill one of mine.

I've been doing a lot of landscaping lately, for which I've carried dozens of 60-pound bags of sand, during which I've had time to study the bags' bilingual packaging and learn that the Spanish word for sand is "arena" (pronounced, in the Spanish fashion, "arrayna").

On Saturday, Karen and I visited her Aunt Marylou on California's Mendocino Coast near a town called Point Arena (pronounced, in the English fashion, "areena"). It occurred to me on the drive that a seaside town was more likely named after sand than a sports venue. Aunt Marylou and a quick look at Wikipedia confirmed it: Spanish-speaking sailors originally called the spot "Punta Arena." Sandy Point.

I was proud enough of that insight to share it with my daughters on Sunday. Robin and Laura, who studied classics and Latin for fun, replied, "You know the connection, don't you?"

Learning the connection between ancient bloodsport half a world away and a cute little town I had lunch in centuries later made me unusually happy.