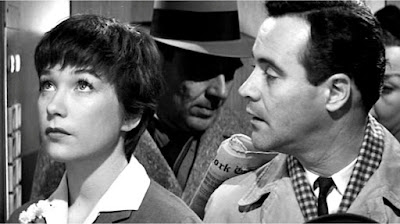 In my never-ending effort to fill my cultural gaps (we all have them), last night I watched for the first time Billy Wilder's "The Apartment," starring Jack Lemmon and Shirley MacLaine. It's a 1960 Oscar-winner, often listed as one of the best films of all time. I can see why.

Lemmon plays a low-level insurance executive who works his way up in the company by loaning his apartment to his sleazy superiors for their extramarital affairs. This leaves him locked out of his own apartment a lot, and with neighbors who are both impressed and disgusted by all the action they they think he's getting. MacLaine plays an elevator operator with bad taste in men, including Lemmon's married boss.

These are surprisingly mature themes. Not that people in 1960 didn't have affairs, but to see them portrayed so openly and casually on screen is a mild jolt. Nearly every man but Lemmon is a cad, and even he's an accomplice. MacLaine makes it clear that she's a "good girl" who's been around the block a few times.

The movie's also a white-hot critique of mid-Century corporate culture, a pretty common theme of the time. Lemmon works at a desk in a grid of hundreds of identical people sitting at identical desks on an office floor that vanishes into infinity. They enter and exit elevators summoned and dispatched by stern women with clickers, like orca trainers at Sea World. In a few years, all those people's tasks will be taken over by computers, and it's easy to conclude the computers did them a favor.

Lemmon is terrific. I'm more used to old Jack Lemmon, whose quirks and mannerisms I didn't always enjoy, but young Jack Lemmon was a rubbery coiled spring who could make putting a kettle on the stove interesting. And MacLaine . . . sigh. She's impossibly beautiful as well as a complete, complex character in her own right. Two terrific performances. Add the avuncular Fred MacMurray and Ray Walston playing against type as disgusting jerks, and you've got yourself a movie.

I kept an eye on old tech. I am not a scholar on the history of electric blankets, paper towels or instant coffee, but was surprised that Lemmon's tiny apartment had all three. He also had a nifty tabletop television remote that looked to be hardwired to the TV, an old fridge with the compressor on top, and a match-lit gas stove. I read that Wilder deliberately designed the apartment with a realistically cramped layout and well-worn furnishings, some borrowed from his own home. It feels lived in. The film is an unintentional time capsule of its era.

I also kept an eye on details that play differently today than they would have then. Sexism, obviously. Men are execs and women are secretaries. MacClaine's entire job is to stand in the elevator and push buttons for people, and she has to laugh off handsy men pinching her butt as a condition of employment. Also racism. The only black person I can recall seeing is a shoe-shine man; the only Asian is a restaurant piano player whose album is titled "Rickshaw Boy."

I don't think drinking and drunks, which the movie is loaded with, are as funny as they used to be. The office Christmas party is a drunken bacchanal of unbridled lechery. And I was really struck by The Apartment's attitude toward suicide, which isn't exactly played for laughs but more lightly than felt right to me. MacClaine tries to kill herself with sleeping pills, after which Lemmon confesses to her that he once tried to shoot himself. Like it's just something folks do when they break up. Near the end of the film we hear a loud bang and wonder if Lemmon has finally done himself in, and the "joke" is that he only popped a bottle of champagne. Kind of cringe-inducing, I thought.

I quibble (understanding that my quibbles could be someone else's deal-breakers). The Apartment is a sophisticated film that expects its audience to keep up. Great dialog. There are a lot of small grace notes. I caught one bit where, early in the movie, a drunk Lemmon says "three" to MacLaine and holds up four fingers, and much later MacLaine does the same to him. It tells you these characters are on the same wavelength without actually saying so. They don't make a big deal out of it, both moments pass quickly, but if you catch it it's terrific.

Recommended for its sharp writing and brilliant performances. May want to avoid it if its 60-year-old attitudes toward infidelity, sexism, racism, alcoholism, or suicide would make it hard to enjoy.

And the Livin' is Easy

It's 80F (27C) with clear blue skies in northern California this afternoon. A perfect day!

That's a problem. It's the middle of winter. It should be 20 degrees colder and raining. We're breaking high-temperature records that have stood for 150 years. Average rainfall to date is 18 inches; we've had 6. If it doesn't rain hard in February and March, we're in for another drought and a kindling-dry fire season next fall. Worldwide, 2020 was one of the hottest years ever (graph from NASA's GISS Surface Temperature Analysis).

The expanded edition of "A Fire Story," coming out in a couple of months, hits the point that it's a book about living in a climate-changing world. I didn't really say that in the original book but the time since has made it clear to me, and convinced me that I shouldn't be coy about saying so.

Today is beautiful. Karen and I had a picnic. I never would have expected Armageddon to be so . . . pleasant.