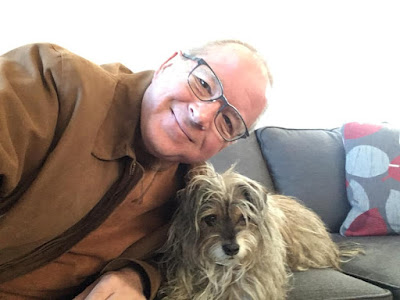 Thursday Update: Well, we’re in an Evacuation Warning Zone, our natural gas (space heating and hot water) is off, and the place is a mess but....

Michael Cavna of the Washington Post wrote to ask how I was doing, and then wrote an article about it.
Posted by Brian Fies at 7:09 PM 1 comments

Wednesday is "Whew We Made It!" Day

Wednesday Update: our neighborhood made it through the night, which was an important milestone. Winds that could have pushed the fire into town weren't quite as bad as predicted, and firefighters successfully corralled it. Keeping in mind that I'm no fire scientist and fire has a mind of its own, it looks like we're gong to be all right.

Other communities on other edges of the 120 sq mile burn are still in danger. Something like 90 homes have been destroyed but it could have been SO much worse. The only reason the Kincade Fire didn't burn thousands of homes and kill hundreds of people was extraordinary planning, strategy and execution. Turns out we learned some lessons from two years ago and applied them well this week.
Posted by Brian Fies at 7:20 AM 1 comments

Tuesday Morning Report: We're fine, still hunkered down with Laura and Robin in their apartment in Novato. Karen brought home delicious Vietnamese take-out last night after a busy day of saving the county.

Best of all, the electricity switched on last night! We're out of the 19th Century back into the 21st! No idea how long it'll stay on--PG&E keeps threatening to turn it off--so we're charging up everything we can and not taking it for granted.

Still no idea when we can go home. We hear from people still in the area that there aren't actually any roadblocks, we could drive in anytime, but we'd rather stay safe, smoke- and ash-free, and out of the way of firefighters. Today will be another bad wind day and the Kincade fire could turn any direction, including straight down the path the Tubbs fire took in 2017. Things are looking better but we're not out of the woods.

Our new house has one of those Ring video doorbells. I open the app every hour or two just to make sure my front porch is still there. I can even see a little bit of the street through the fisheye lens. Looks good so far.

Everything is all right when you're walking a dog. 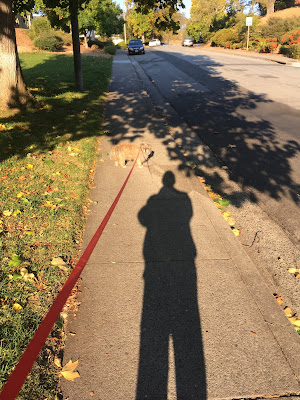 Col. Mustard with a Rope in the Study 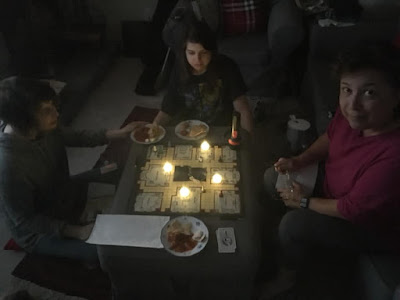 Early Monday morning update for worried friends: my family and I are safe and will continue to be. We are 35 miles from danger, unless living without electricity is dangerous. We like to think of it as camping indoors. The pic is us playing Clue last night by electric candlelight.

My house still stands (a couple of brave/foolish neighbors stayed behind and send pics) but the fire got close overnight, about a mile. We know how quickly a fire can eat up a mile.

We’re cautiously optimistic (not to mention fatalistic)—unlike 2017, firefighters have resources and strategy, and are fighting hard to save neighborhoods. Assuming our neighborhood survives, no idea when we’ll be able to return home; at least a few days, I’d think. Officials say they might contain the fire by Nov. 7 (!).

No news from us is good news. Thanks for caring. 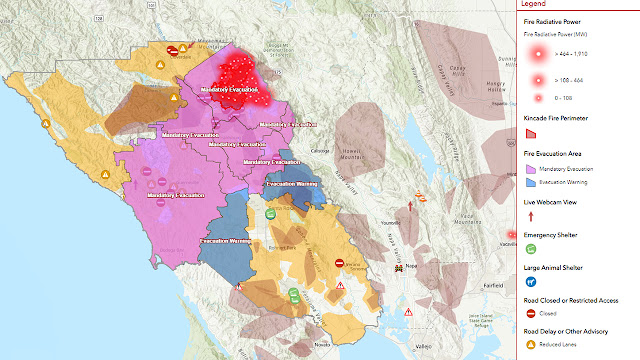 Today was weird. For me it felt kind of like a "do over," a chance to avoid the mistakes I made last time and get it right. Almost leisurely. We packed and evacuated well. This is not the sort of skill one wants to master. It's possible--not probable, but possible--that our home won't be there this time tomorrow. That's a strange, unsettling uncertainty to live with.
Posted by Brian Fies at 8:30 PM 0 comments

Son of a bitch. Here I am fleeing for my life from another fire. Again.

We expect we'll be OK, but we thought that last time, too. Not taking any chances this time--fool me once shame on you, fool me twice shame on me!--and I've got most of the day to pack the car instead of 15 minutes.

I think I just found a new ending for the expanded paperback "Fire Story" coming out next fall; I just don't know what that ending is going to be. I probably wasn't supposed to announce that yet, but screw it. I'm having a bad day.
Posted by Brian Fies at 11:10 AM 0 comments


Last night's LitQuake reading in San Francisco went very well, but it was a close call. If I'd known when I agreed to the gig that it was also the date of SF's big Columbus Day (excuse me, "Italian Heritage Day") Parade AND Fleet Week, I might not have come. Every street was gridlocked and Columbus Ave., a major diagonal artery through the city that I had to get to the other side of, was the parade route. People stopped their cars in the middle of intersections to watch the Blue Angels fly over. Sigh. People.

Nevertheless, I got there, and even had a few minutes to drop into the Cartoon Art Museum to see Andrew Farago and pick up my art from their recently closed "Fire Story" exhibition.

Then walked about a mile and half to the Live Worms Gallery, where three other artist/writers and I talked about "Books to Look At." Gallery owner Jody Weiner and his wife, artist Nancy Calef, were terrific hosts, and after sorting out some AV problems (Sigh. Machines.) we had a good literary event in a quintessentially San Franciscan space.

I met some great people at LitQuake, including fellow speakers Mark Ulriksen, Jon B. Cooke, and Jeremy Fish. Proud to be a part of it.
Posted by Brian Fies at 7:24 PM 0 comments


My hometown newspaper, the Press Democrat, interviewed me for a special issue on how people are doing two years after the fire. They also asked me if I'd draw some new "Fire Story" pictures for them--they didn't specify what they wanted, left that entirely up to me. So I drew the three new pages shown online and printed in this morning's paper. 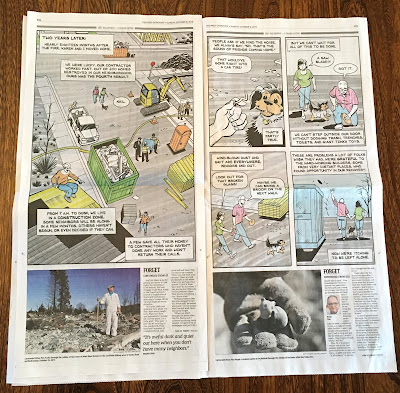 I like the article by Dan Taylor and I'm grateful for the coverage, really! Every column-inch of newspaper real estate is valuable, and they gave me four (!) pages. But when I saw how big they ran my artwork, I cringed. Most comics and illustration artwork is drawn larger than the size it'll be printed at because shrinking a drawing tightens it up and hides its flaws. The PD magnified them much LARGER than their 8 x 12 inch original size. I think they hold up all right, but Yeesh! Imagine a close-up of your face blown up to the size of a billboard, showing every pimple and pore.

Anyway . . . There are other stories about other people in this edition, too, and together they make a point I tried to make myself: there's such a wide variety of post-fire experience, from tragedy to triumph, that no single story captures them all. Most people are still muddling through, even two years on, dealing with frustrations and two-steps-forward-one-step-back as best we can. It's been hard.
Posted by Brian Fies at 8:35 AM 0 comments