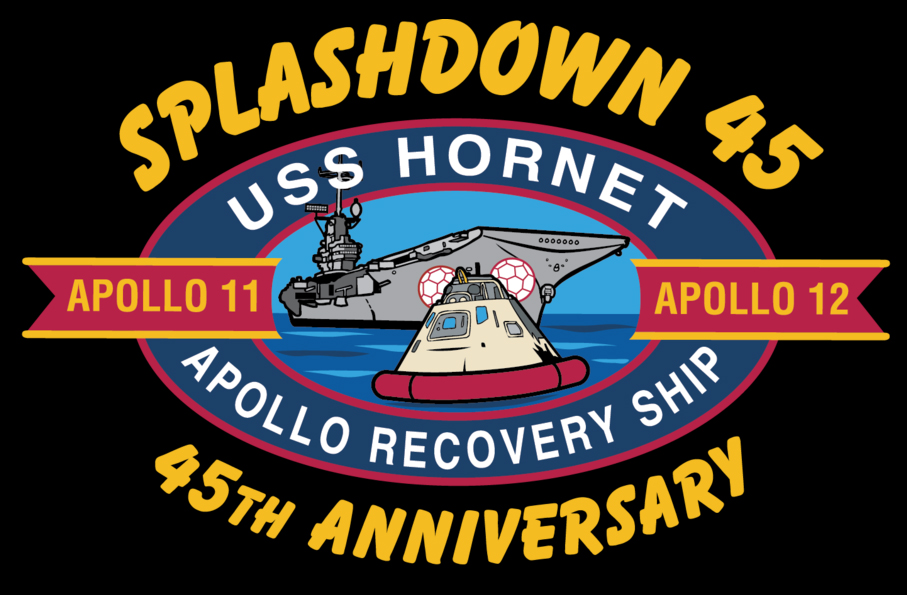 The aircraft carrier USS Hornet was built during World War II, served in the Korean and Vietnam Wars, and recovered Apollo 11 and Apollo 12 from the South Pacific in 1969 before being decommissioned in 1970. She spent a couple of decades in mothballs before becoming a National Landmark and museum now floating in San Francisco Bay at the Alameda pier. As my six regular readers know, my daughter Laura is on the museum staff, and I never tire of telling people that my little girl has the keys to an aircraft carrier.

I think Laura had something to do with me being invited to speak and sign copies of Whatever Happened to the World of Tomorrow at last Saturday's "Splashdown 45" event, marking the 45th anniversary of the flight of Apollo 11. But it wasn't entirely nepotism; I believe that at least some Hornet board members independently knew about my book. Still, I think I owe the kid a lot.

Did I mention that the star of "Splashdown 45" was Apollo 11 astronaut Buzz Aldrin?

That was sufficient motive to rise at the crack of dawn Saturday and leave Comic-Con for a flight to the Bay Area.


The Hornet is a huge ship that usually swallows crowds with ease, but I've never seen it as packed as it was Saturday. I was talking with the museum CEO and he guessed more than 3500 attended. Buzz Aldrin was scheduled to speak on the big main stage in the Hangar Deck at 1:00. I was slated for the same stage at 11:30, asked to talk on the topic of Space Art and Illustration.

I widened that mandate to include a lot of the themes I worked into WHTTWOT: mainly the idea that the stories we tell about ourselves and our future are as important in shaping that future as the hardware we build. "Beat the Commies to the Moon" is as much an aspirational narrative as "Boldly go where no man has gone before." I focused mostly on art and illustration but also ventured into movies, TV, literature, and tried to tie them all together.

Just reeling off names like that makes it looks like a random laundry list, but I think I was able to build a theme and make a point that people seemed to get and appreciate. The Hangar Deck was set up with several hundred chairs facing the stage, and projection screens and speakers hanging half the length of the deck. It was obviously rigged that way so that everyone throughout the ship could see and hear Buzz Aldrin, but it worked to my advantage as well!

From the start I had a pretty big audience, which grew as my talk went on. For a little while I thought I must have been orating better than anyone had ever orated before: more and more people were coming to watch me! Slowly it dawned on me that no, they were just staking out good seats to see Aldrin, who was going on 45 minutes after I finished. Still, it also worked to my advantage. Captive audience or not, I was the only thing on the stage at that moment so they had no choice but to sit and listen.

After my talk I sat at a bank of tables with other speakers and presenters to sign books. That went splendidly! Not everyone who bought a book got it signed or even realized I was there, but I had a steady stream of really nice people come up to chat and get an inscription. Having just left Comic-Con, I couldn't help noticing that Space People are a lot like Comics People but generally brighter (no offense to Comics People but c'mon!).

Aldrin was preceded by a short video highlighting the Apollo 11 mission. I was surprised. I've seen the same old footage so many times I thought I was relatively numb to it, but I got an honest-to-God lump in my throat and tears in my eyes watching that Saturn V blast off into the Florida sky. Man. Aldrin was introduced by astronaut Yvonne Cagle, with whom I once shared a pizza.

At 1 p.m., Buzz Aldrin took the stage. Topic One of every conversation the rest of the day: how does an 84-year-old man do it? He boarded the ship at 9 a.m., did press interviews for three hours, then gave a one-hour speech, then signed books for three hours, then appeared at a reception and dinner in his honor until probably 10 or 11 p.m. Could you do that? I couldn't do that. I guess once you have the Right Stuff, it never really goes away. 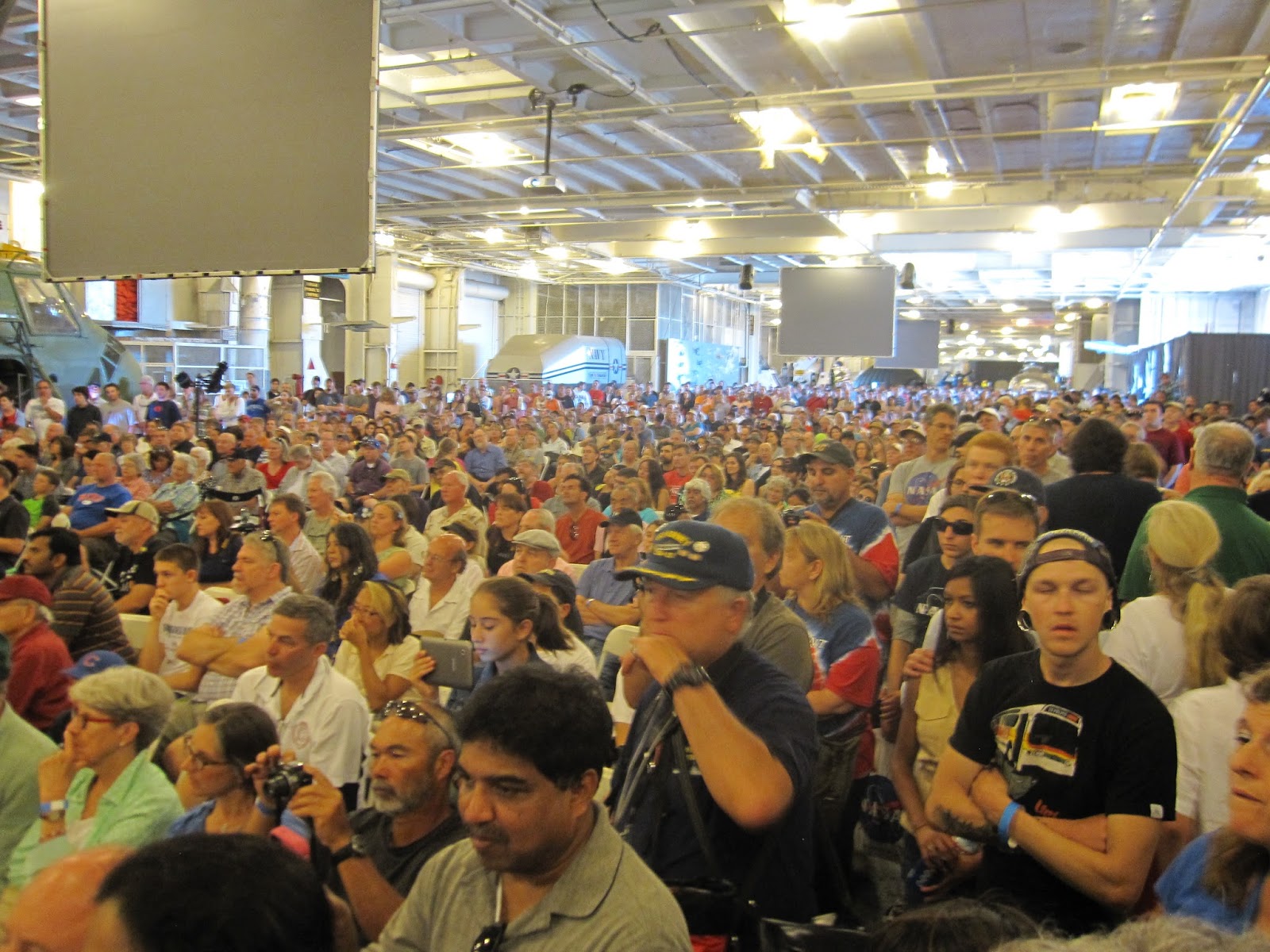 Buzz's talk touched on his Air Force and academic career before settling on Apollo 11. I'm sure he's told the same "magnificent desolation" stories 300,000 times before, but he tells them well. Then he segued to his current passion, drumming up popular support for manned exploration of Mars. I wouldn't presume to debate Aldrin on the wisdom of that, but will say that he makes his case convincingly and enthusiastically.

Buzz World
Preparing for "Splashdown," I jokingly told some people I'd be spending the day "hanging with Buzz Aldrin." In fact, one does not hang with Buzz Aldrin. He had a black-shirted security detail of about six persuasive men who kept the respectful mob at bay. He also had one handler whose main job was being the bad guy so Buzz didn't have to. No, you cannot have a private word with him. No, he will not shake your hand. No, he will not sign your photo.

Buzz's book signing was a rapid assembly-line process--necessarily, given the hundreds of people in line. I had no special access, just queued up with everyone else, wondering what I might say to the Great Man when I had the chance. What hasn't he already heard 30 million times before? What could I possibly say that he might chuckle at and remember at the end of the day? Maybe something smart and obscure, a question about orbital rendezvous (the subject of his Ph.D. thesis) or his Gemini 12 mission?

In the moment, I froze up tighter than little Ralphie meeting Santa Claus in "A Christmas Story."


To be fair, I only had about two seconds to spin around for Karen to snap a photo and spit out my carefully crafted bon mot. I believe I said, "It's a great honor to meet you." He looked up and said, "Thank you." Yeah, I'm pretty sure he's still got that original insight rattling around his brain.


After the day's main public event, Karen and I stayed for a VIP reception. Here, again, you get a unique perspective on spending time in the orbit of one of the most celebrated men in the world. Buzz came to the reception and seemed accessible--he was 10 feet away! Yet actual interaction with him was defined by invisible circles enforced by his polite but firm security team. Only certain people got inside the circles. I wasn't one of them.


This is no criticism of Aldrin. I'm sure it's what he has to do to manage the millions of people who "only want a minute of his time" and get through the day. I just found it a fascinating glimpse at what goes into being Buzz. It was impressive and a little sad. I imagine it gets very tiring.

As it was, this was a very special day for me. In addition to spending the day on the Hornet (always fun!) and making such a memorable impression on Buzz Aldrin, I think this was my most successful speaking/book-signing event ever. My talk went very well. The museum sold all of its WHTTWOTs, so that by the end of the day I was doing sketches for disappointed people who hadn't been able to buy my book. That never happens for me.

I opened my talk by saying that if I had a time machine and went back to tell 1969 Brian that someday he'd be standing in that spot, on that ship, speaking on the same stage that Buzz Aldrin would be taking in less than an hour, there's no way I could make him believe it. "Splashdown 45" pushed every emotional button I've cultivated for 45 years. 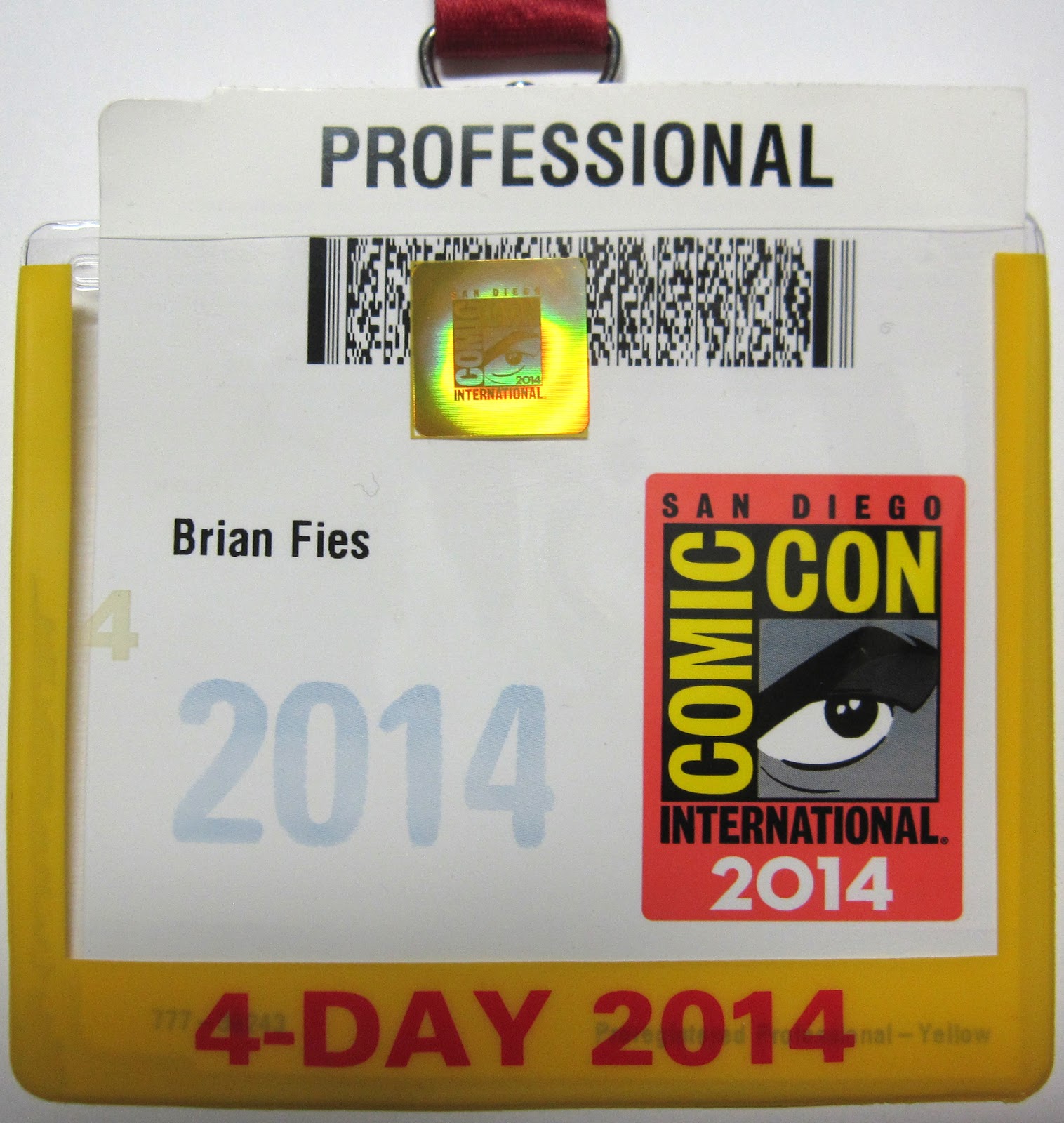 I arrived home safe and footsore from Comic-Con International in San Diego last night. Hard for me to believe, but I haven't attended since 2010. Things have changed a bit, in ways I'm not sure improved the experience for me (I'm trying to say that nicely). By and large, for an event that tries to safely entertain 150,000 people for four days, the organizers pull off a miracle, and they were very kind and helpful to me.

I attended Thursday afternoon and Friday. The best part for me was seeing many friends, and meeting some people who until now have only been Facebook or e-mail acquaintances. Also, a teaser: I know the two nicest people in the world. I'll tell you their names at the end, but just wanted to let you know now that if you've been searching for the two nicest people in the world, call it off because I've found them.

This report is a photo essay, punctuated with bits and bites of notes. IMPORTANT QUALITY CONTROL NOTE: Many of these photos are blurry/hazy because I didn't notice until I got home that my camera lens had a greasy fingerprint smeared across it. Sorry; no do-overs.

The Nicest People in the World
I promised to divulge the names of the two nicest people in the world, and now it can be told. For nearly 40 years, Richard and Wendy Pini have created and nurtured the universe of "Elfquest," a pioneering work of fantasy comics and literature. Aside from "Lord of the Rings," I'm hard-pressed to think of any body of work that's had a bigger influence in that field. Anyone attempting to make a comic touching on the lore of elves has to deal with the groundwork already long laid by Tolkien and the Pinis.

Richard is an astronomy buff who contacted me when Whatever Happened to the World of Tomorrow came out. We've corresponded, and he's kept up with (and often commented on) The Last Mechanical Monster. On Friday he told me he'd just caught up with Mom's Cancer, and we talked a bit about our families.

And then he pulled out a big box, and said nice things and something like: you may not leave here with an Eisner Award, but I had to make sure you didn't go home empty-handed, and unwrapped this:


Richard built me a trophy himself, from a tapered silvery base topped by an actual gold-tinted radio vacuum tube, exactly like those that power the Robot in my webcomic. Wendy had tears in her eyes; mine may have moistened a bit too. This is the most unexpected, thoughtful, nicest thing anybody's done for me in a long time. I just have such respect for them and their work, and to turn around now and have them do something like this for me.... Holy Moley!

I think I'm pretty good with words, but I can't even tell you what that means to me.

I just want it on the record that I picked it. I also got to keep Tom Racine's dollar, so that eased the sting.

Next morning I got up very early and flew back to the Bay Area for another important engagement. That's the topic of my next blog post.