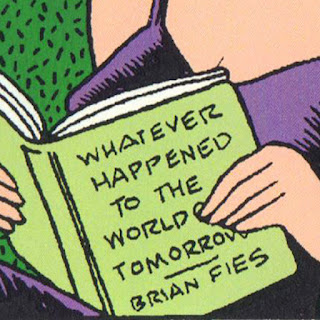 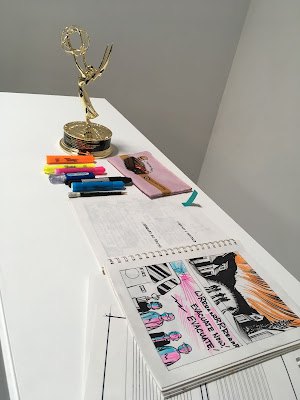 I just dropped off some "Fire Story" artifacts at the Museum of Sonoma County for their upcoming exhibition "From the Fire" marking the wildfires' one-year anniversary. I'm loaning them the notebook I drew the original "Fire Story" webcomic in, along with the markers, pencil, etc. that I drew it with, which the museum folks seemed thrilled to get. Best part for me: they'll also display the pink plastic pencil case I stole from my daughters. Hey, girls, you're in a museum! (Not that Laura isn't in a museum every day, but....)

I'm also loaning them Emmy. We debated including her. The museum has the same sensitivity I have: our community's disaster is nothing to celebrate. "Hooray, I got an award, sorry everything burned down!" I told them that to me the Emmy represents the larger world honoring our stories (not unlike the exhibition itself), and I'd trade it for my house in a second if I could. So I think they're going to show it with a little placard that says exactly that.

From what I just saw in early set-up, it's going to be a great exhibition. Opening reception is this Saturday, and it'll run through January.

In addition, pages of original art from my forthcoming graphic novel are scattered in museums and galleries all over the northern San Francisco Bay Area:

All these places are run by talented people who are passionate about capturing our history and telling all our fire stories. Luckily, I had enough pages to go around, barely. If you're in the area, take a look sometime in the next couple of months.