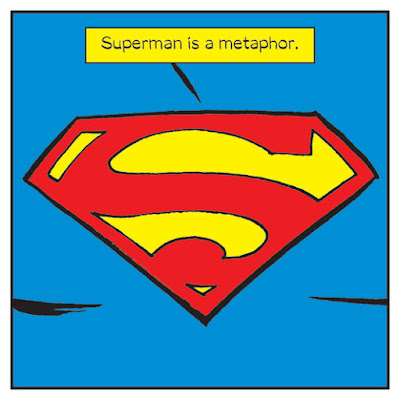 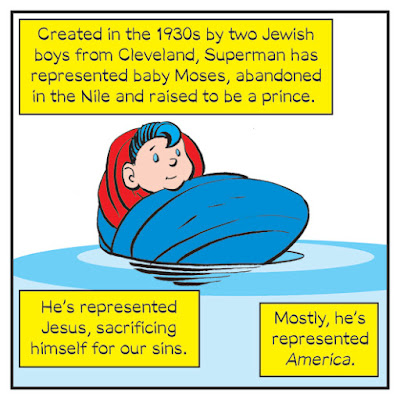 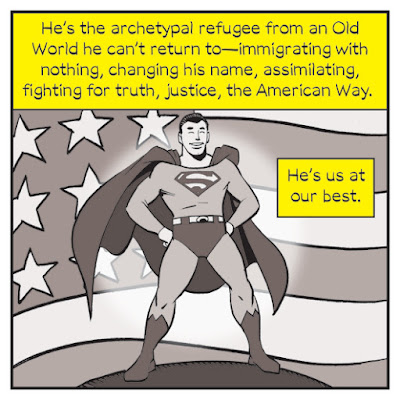 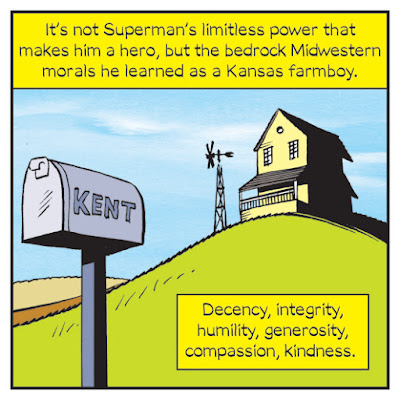 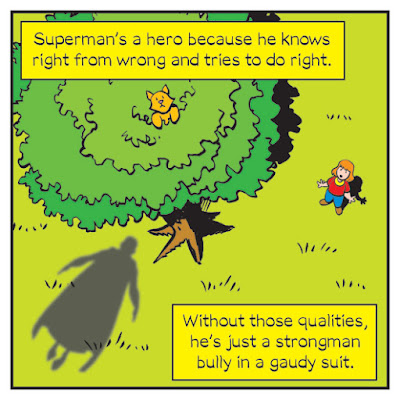 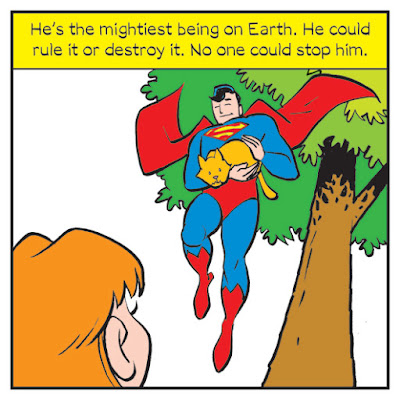 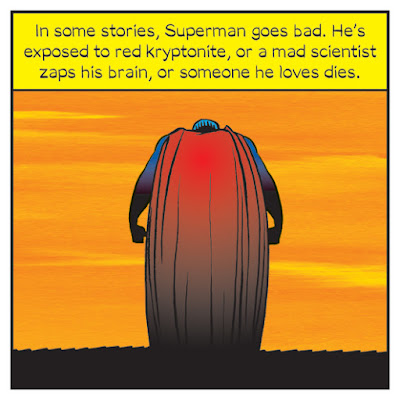 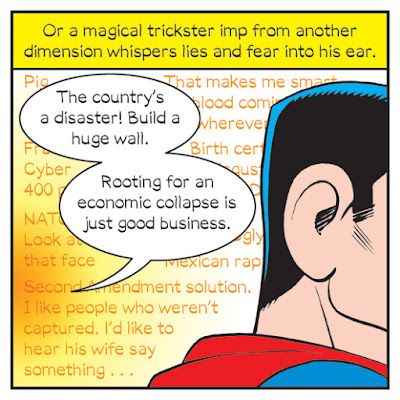 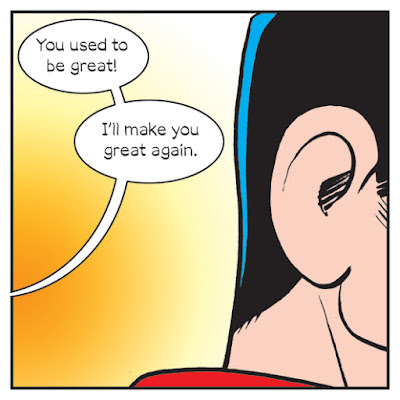 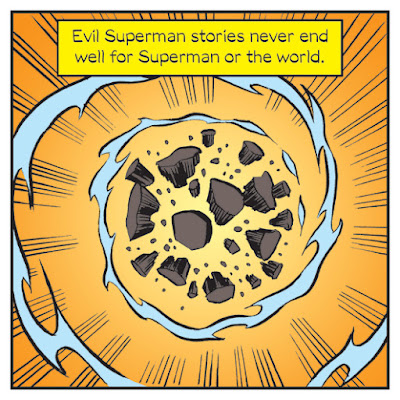 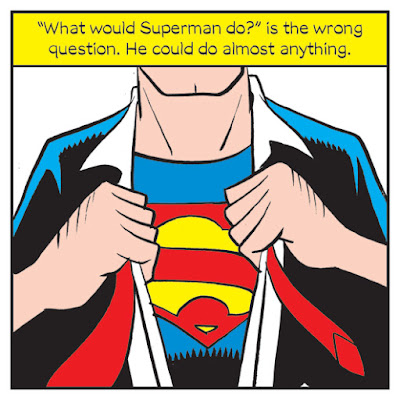 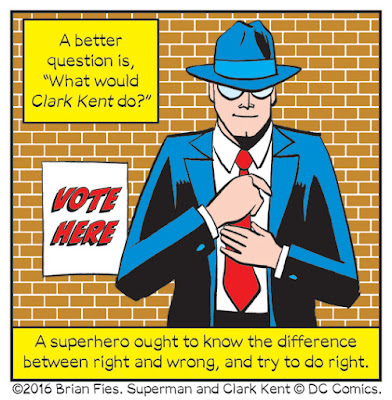 The "What Would Clark Kent Do?" filter works surprisingly well. Here's a partial list of things I'm pretty sure he wouldn't do:

Make fun of fat women.
Make fun of ugly women.
Make fun of menstruation.
Make fun of the disabled.
Insult POWs.
Insult the parents of dead soldiers.
Extort his allies ("Eh, nice country you got here, be a shame if somethin' happened to it.")
Go into business with General Zod.
Praise the way General Zod handles the press and dissidents.
Suggest that General Zod could maybe help him get rid of his enemies.
Lie; then when confronted with that lie, double down or deny.
Brag.
Bluster.
Bully.
When caught bullying, retort "Can't you take a joke?"
Blame his failures on everyone but himself.
Appeal to people's worst instincts instead of their best.

Really, the list is practically endless. I keep waiting for a modern-day Joseph Welch versus Joe McCarthy moment, but I'm not sure we have it in us anymore. Decency is too old-fashioned.


I don't expect to change anyone's mind, and I'm breaking my rule about not doing politics online. Might regret it; don't care. I had to stand up and be counted. Clark would.

Here's the above comic laid out in two pages, which I wasn't sure would be readable at blog size. Click to embiggen. Thanks for your indulgence. 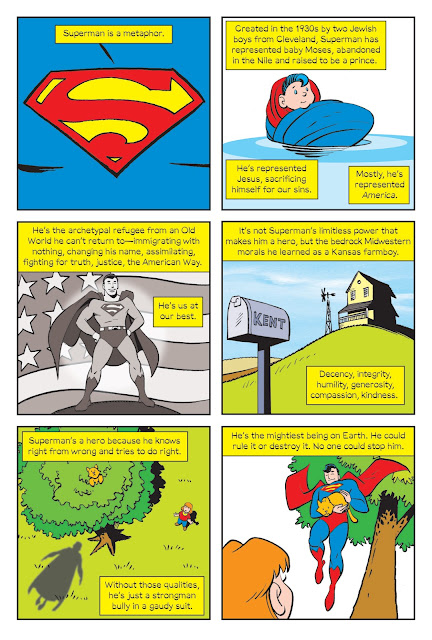 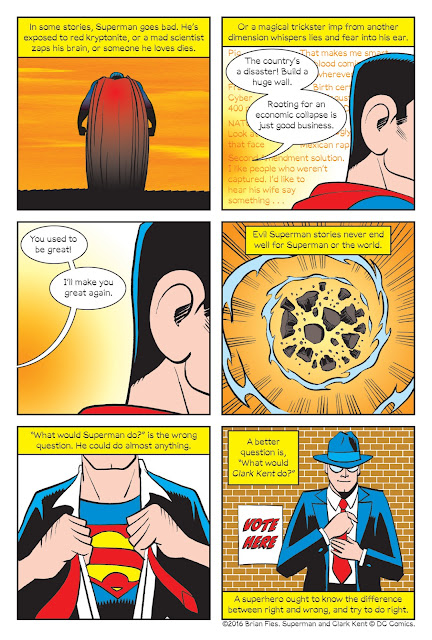 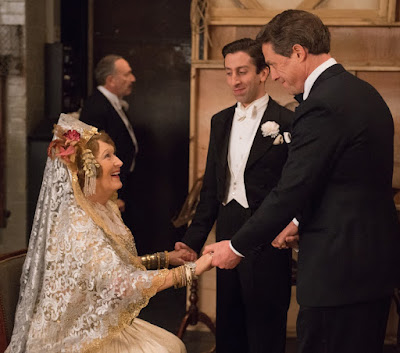 Over the weekend, Karen and I saw and really enjoyed "Florence Foster Jenkins." Based on an actual woman who's been called the World's Worst Singer, the film stars Meryl Streep, who may deserve an Oscar for her performance as Florence; Hugh Grant, who Hugh-Grants his way through a good performance as Florence's morally ambiguous husband (I think the film answers the question of whether he truly loves Florence but you may disagree); and Simon Helberg, "The Big Bang Theory's" Wolowitz, who gives a master class in reactive acting as Florence's horrified new accompanist.

Madame Florence was a wealthy woman in pre-War New York City whose patronage of the musical arts made her a pillar of high society. But merely supporting the arts wasn't enough for her. She wanted to sing, first at exclusive performances at the Verdi Club she founded to showcase her talents, then eventually at Carnegie Hall.

No one ever doubted Madame Florence's passion for music, just her ability to do it. She became a hit by being terrible, and according to the film and some profiles I've read, most people played along, complimenting and applauding as if she were terrific. Cole Porter and Enrico Caruso were fans. There's debate about how self-aware Florence was. Streep plays her as completely deluded and clueless until she gets an honest devastating review; some contemporaries said she was in on the joke.

I thought the movie was very good and, like all good movies, inspired a lot of thinking as I left the theater. For example, about Emperor Norton.

Norton the First, Pepper the Last
Joshua Norton arrived in San Francisco in 1849, and ten years later proclaimed himself "Norton I, Emperor of the United States and Protector of Mexico." He ordered the U.S. Army to disband Congress, and commanded that a suspension bridge be built between San Francisco and Oakland. He may have also imposed a $25 fine on anyone caught using the word "Frisco."

And the entire city of San Francisco played along.

Norton wore a flashy uniform given to him by Army officers at the Presidio. When that uniform wore out, the San Francisco Board of Supervisors requisitioned him a new one. Penniless, he printed his own currency, which was accepted by restaurants and merchants. Passersby bowed to him. Theaters left a balcony seat open for him. He once broke up an anti-Chinese-immigrant riot by standing between two mobs and reciting The Lord's Prayer.

Norton was arrested once, in 1867, by a cop who thought he was insane and ought to be committed. Citizens and newspapers rose up in outrage. The Daily Alta editorialized that the Emperor "has never shed blood, has robbed no one, and despoiled no country...which is a hell of a lot more than can be said for anyone else in the king line." The police chief released him with a formal apology, and afterward police officers saluted Norton whenever they passed him on the street.

Norton died in 1880, as beloved an emperor as the United States and Mexico ever had. His suspension bridge between San Francisco and Oakland was eventually built in 1936. Although it's called the Bay Bridge, there is still today a popular campaign to rechristen it the Emperor Norton Bridge.

This train of thought, from Madame Florence to Emperor Norton, inevitably brought me around to Pepper.

Unless you grew up in my hometown you've never heard of Pepper, but you may have had a Pepper in your hometown. For 50 years Pepper Garcia Dardon was our local eccentric who fancied herself the town marshal, backed up by a tin badge the local cops gave her in the early 1960s. Her beat was downtown, where she directed traffic, collected 50-cent fines from jaywalkers, yodeled on supermarket microphones, and shoplifted penny candy to hand out to children. Pepper ran errands for merchants and sold fundraising tickets for the Kiwanis--no one dared decline. Sometimes, according to a 2005 profile by local historian Gaye LeBaron, Pepper ordered pizzas delivered to the police station to thank her boys in blue, but never bothered to pay for them.

I often saw Pepper around town but only had one direct run-in with her. I was probably 17 or 18, coming out of a store and heading to my car in the parking lot, when Pepper accosted me. "I need to go north. Which way are you going?" I was in fact headed north, but not wanting to provide a taxi that day, I stammered out, "Uh...south. Downtown." "That's exactly where I'm going too!" she said brightly. "Let's go!" Three miles later, I dropped her off downtown and turned around, completely outmaneuvered by the town marshal.

Pepper died in 1992, complaining that people weren't as friendly as they used to be. She was right. Do we have a Florence Foster Jenkins, Emperor Norton, or Pepper anymore? Could we? Should we?

There's some condescension in playing along, smirking knowingly behind their backs. Some might say we're not doing the deluded any favors by indulging them. But, as the Daily Alta argued, if they're not hurting anyone then what's the harm? Who's to say a little collective compassionate fantasy isn't better than harsh reality? Would you tell Madame Florence she couldn't sing, tell Norton the First he wasn't emperor of anything, tell Pepper she had no authority to harass jaywalkers?

Here's Where I Stretch the Theme Too Far
Sometimes when striving writers and artists are being deep and honest, they ask each other how they're supposed to tell whether they're any good. How do you know if you're truly talented and ought to keep trying until you get one good break, or if you're a tone-deaf Florence Foster Jenkins? Winners never quit, but neither do a lot of folks who really should.

Sometimes they ask me what I think. It's a very tough question. I don't trust my own judgment enough to flat out tell anyone to quit and go home. I'm not in the spirit-crushing business. Besides, lots of people whose careers completely mystify me are doing a lot better than I am. What do I know?

I try to read the audience. Nine out of ten people who say "Don't be afraid to tell me what you really think" don't want to know what you really think. They just want to hear that they're great. Anything less than that and their defenses go up and their excuses come out. The other one out of ten is genuinely interested in feedback and trying to learn from it. I think of them as the pros, even if they've never sold anything (yet). It's not necessarily related to age or experience. I've seen 15-year-olds take constructive criticism better than 35-year-olds.

The best advice I've come up with (and I don't think it's great) is to look for external signs of progress. "External" means someone other than your mom or spouse or best friend telling you you're a genius. Someone like an editor. Notice I'm not saying "money," although getting paid is the only sure-fire unambiguous compliment. But if you're doing your best work and getting it in front of people who have the potential to someday pay for it, I have some faith that if you're any good they'll eventually notice. Maybe a note of encouragement along with the customary rejection, or a suggestion for something different you might try next time. Build on that.

Try not to be Florence Foster Jenkins.