In 1962, President John F. Kennedy invited a group of Nobel Prize winners to dinner and joked, "This is the most extraordinary collection of talent, of human knowledge, that has ever been gathered together at the White House, with the possible exception of when Thomas Jefferson dined alone."

I thought of that Saturday while sitting with 20 or so cartoonists helping the Charles M. Schulz Museum pay tribute to the 65th anniversary of "Peanuts." There was an extraordinary amount of talent in the building, which all together might have added up to a bit less than one Charles Schulz. The only problem with appropriating the JFK quote is that Schulz never set foot in his museum, which was built after he died. But he worked at the studio next door, and ate and played at the ice arena across the street, so I say close enough.

My full day at the museum started early, leading a three-hour workshop for Girl Scouts earning their Comic Artist merit badges. I've done a few of these and they're always fun. We make improvisational jam comics as a group, and I talk about the history and conventions of the art form. To earn their badges the girls have to complete a four-panel comic strip applying what they've learned. My wife Karen, who has 20 years' experience in Scouting, is my indispensable girl wrangler. She took most of the photos.


The workshop went from 10 to 1 o'clock, so I missed the Sketch-A-Thon's kick-off event: a panel discussion of Peanuts' legacy in the museum's theater that began at 1 (by the time I got cleaned up and downstairs, the theater was full). I heard it went well. Instead, I set up for the Sketch-A-Thon itself, which went from 2 to 4. My daughter Robin surprised me with a visit (Laura had to work and couldn't make it) and was a big help managing my table.

Some of the names I'm about to drop may not be familiar, but they represent a diverse group of comics creators, many of them working at a very high and successful level.


After the Sketch-A-Thon we all walked over to the studio, where the museum folks had generously parked a fine food truck to feed us.


I've been in Mr. Schulz's studio with other cartoonists a couple of times, and many of them do the same thing I did the first time. They eye the board and the chair. Then they look around. They really want to sit down at the board but they're afraid to. Somebody says, "Sure, go ahead!" so they reluctantly sit. Then a little electric shiver goes through them, as if they feel Schulz's aura emanating from the wood. If there's magic in the world, that's it.

This was a long, very nice day for me. I reconnected with some friends who don't normally come out this way, made a couple of new ones, sold a few books, taught 24 Girl Scouts how to make comics, and ate a pretty darn good taco combo plate. I need to mention cartoonist Shaenon Garrity and Cartoon Art Museum curator Andrew Farago, who did me the honor of asking me to draw a picture in a sketchbook they're compiling for their little boy Robin, who gives good high-fives. I didn't get any photos but it was terrific to see them.

Also great to see my unphotographed pal Justin Thompson (Schulz studio and the comic "Mythtickle"); ray of sunshine Rosie McDaniel; the museum's Education Director Jessica Ruskin, who took care of everything and everyone all day; plus lots of other people, including a few personal friends who stopped by.

An Internet friend brought to my attention a new graphic novel being published in the U.K. titled The Inflatable Woman, in which cartoonist Rachael Ball writes about cancer. It sounds like it's a work of fiction based on Ball's own experience with breast cancer. The cover looks like this: 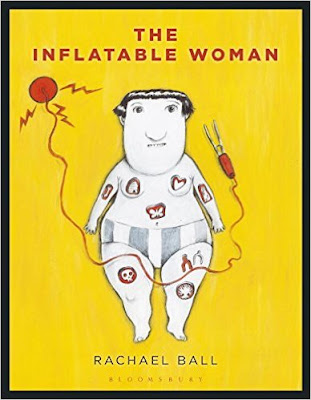 My friend thought I'd be interested because in Mom's Cancer, my graphic novel about my mother's experience with lung cancer, I drew two pages that looked like this: 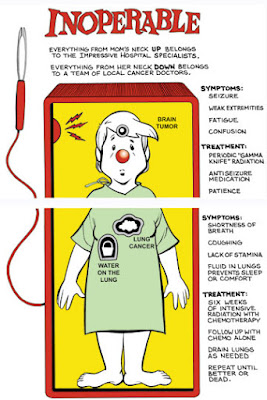 So there you go.

For the record, and to put my friend's mind at ease, I've got no problem with that.

I don't know Ball and don't know if she read Mom's Cancer. I doubt it. I think she probably stumbled onto the same "Operation" metaphor I did. It's a good one! The identical red and gold color palette is easily explained: those are the colors of the game.

One thing I've learned over a long time of trying to be a creative person is that ideas--even ideas that seem strange and unique--are surprisingly common. It's what you do with those ideas that distinguishes them.

For example, I had opportunities to pitch story ideas to the producers of "Star Trek: The Next Generation" (then later "Deep Space Nine" and "Voyager"). I never sold them anything so the experience was a failure, but I learned a lot. I once got two sentences into a pitch when the story editor stopped me and said, "We started filming that last week." I was flabbergasted: I thought my idea was dazzlingly original. I was flabbergasted again when the episode aired and I saw that he was right. It was my story, including the parts I hadn't had a chance to tell him. If he hadn't stopped me, I'd have been absolutely certain that "Star Trek" had stolen it.

I think there are a lot of creative people nursing grudges against other creators or companies they're certain ripped them off but probably didn't. I know a few of them.

Even if Ball did read Mom's Cancer years ago and consciously or subconsciously filed away the "Operation" metaphor, so what? It's one image among hundreds in both of our books. Her use of it does me no harm. Besides, you can't copyright an idea, only the specific expression of it, and hers is totally different.

Ball doesn't need my blessing but she has it anyway. I'd like to meet her someday because I think we'd have a lot to talk about. I like the look of her cartooning style and wish her all the best with her book.