Hanging on the Hornet with Hyneman

Saturday was a special day for me, as I had the honor and pleasure of moderating a discussion of STEM (science technology engineering math) education at the USS Hornet Sea, Air & Space Museum with docent Chuck Myers and TV Mythbuster Jamie Hyneman.

Jamie's been doing some prototyping for the U.S. Navy aboard the Hornet, in exchange for which they asked him to make an appearance.The opportunity to moderate came to me because the Hornet's STEM coordinator just had surgery and couldn't do it, the Hornet folks thought of me from other events I've done there, and maybe a bit because my daughter Laura is the museum's exhibition designer (although as I understand it, they approached her rather than the other way around).


Jamie, Chuck, the Hornet staff and I exchanged e-mails for weeks in advance of the event, figuring out what it would be. The idea was "STEM to Stern: How an Aircraft Carrier Works," and we settled on taking broad scientific concepts like transforming potential energy to kinetic energy, asking Jamie about his real-world experience air-dropping dummies and crashing trucks, and explaining how the concepts applied on the Hornet, e.g., catapulting airplanes off the flight deck. I prepared about three times as much material as I knew we'd use, Chuck prepared about five times as much, and Jamie showed up and told great stories.

Did you know that a TA-4J Skyhawk (which was not coincidentally parked next to our talk) weighing 24,500 pounds landing on a carrier at 135 knots has about the same kinetic energy as a fully loaded 18-wheel semi truck weighing 80,000 pounds going 85 miles per hour (about 26 million joules)? I do, because I did the math on that. Imagine a semi going from 85 mph to a complete stop in 2 seconds, which is what those planes did. Lots of cool accelerations and forces involved.

Jamie turned out to be pretty much the guy you see on TV. I was afraid he'd be very taciturn, answering with "yup" and "nope," but he's chatty and articulate when aimed at a topic he's passionate about. He was downright eloquent talking about the importance of learning by doing and "getting your hands dirty." I said how much I admired the Mythbusters motto "Failure is always an option" and Jamie explained how the program evolved from being about demonstration to experimentation as they found that the best episodes often happened when things went wrong. Over lunch before the talk, he told a small group of us a terrific story about riding out a Caribbean hurricane in his sailboat.

Jamie was very pleasant and professional throughout, but the most engaged I saw him was before the talk, when we snuck him into an employee lounge as a makeshift green room, only to find a half dozen aircraft restorers eating lunch. Jamie immediately opened a 10-minute discussion with them about the challenges of painting steel, as if that were the first question that had popped into his head when he woke up that morning. It was neat.

Jamie's given hundreds of talks like this. While he seemed very willing to roll with whatever we had in mind, he also had clear opinions about what would work best. We did whatever he said. It worked best.

I asked him privately if he missed Mythbusters. "No." He's very busy doing work he loves out of the public eye.

In all the focus on Jamie, I don't want to shortchange Chuck, who has been a docent on the Hornet for seven years and served as a bridge officer on her identical sister ship, the USS Yorktown. He's the best. Chuck really knows his ship, but more important for our purposes, has a talent for explaining what he knows without bogging down in mind-numbing detail. Chuck prepared more than 30 slides and we ended up using seven or eight of them, and I just wish we'd had another hour to really dive into some of the material he'd come ready to talk about.

But Chuck and I both understood what we signed up for. My idea as moderator was to come prepared but flexible enough to let the conversation follow its own course. I didn't have a checklist of points I had to hit, but if the talk wandered to thermodynamics, I was ready to discuss steam turbines and exploding water heaters. People came to see Jamie; my job was to keep the ride between the ditches and otherwise stay out of the way.

I think it all went great! We had a couple hundred people turn out, which helped raise money for the Hornet's STEM program. All in all, the day was a real life and career highlight for me. I appreciate the Hornet crew giving me a chance to do it.

One week from today, May 22, my Eisner-nominated webcomic The Last Mechanical Monster will begin appearing three days a week at GoComics.com.

I began posting the comic myself in 2013 and, 170 pages later, finished it in 2015. I was upfront about The Last Mechanical Monster being a "work in progress"--it said so right in each page's header--which in practice meant it was almost all black-and-white art. I also used the opportunity to solicit readers' suggestions and feedback, and used some of it.

Since then, I've colored the entire thing, and was honestly stunned by what a big difference it made. It really reads to me like a whole new story. 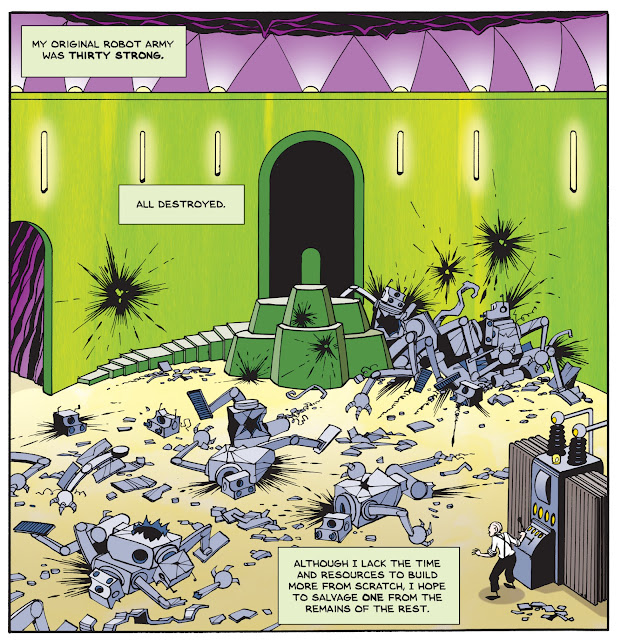 Now GoComics.com will offer it to a potentially much larger audience than I ever reached on my own.

GoComics is the online arm of Andrews McMeel Universal, which syndicates most of the biggest and best comic strips and newspaper features in the world. Peanuts, Doonesbury, Garfield, Pearls Before Swine, and Dear Abby are all theirs. To be clear, Last Mechanical Monster will not be in newspapers, only online. That still means thousands of potential new eyeballs. CoComics readers can subscribe to a personalized list of comics via either a free or premium membership. I might even earn a few bucks if I get a lot of subscribers, and it's easy to sign up for a free account (*ahem*). If it does really well . . . who knows?

GoComics readers familiar with my original story will notice one change right away. My first version made no secret that it was a sequel to the great 1941 Fleischer Studios "Superman" cartoon titled "The Mechanical Monsters." Those shorts have long been in the public domain, so while I obviously couldn't use Superman in my new material, I felt legally and ethically free to retell the old cartoon's story in an opening preface. Well, my editor at Andrews McMeel Universal was understandably leery of that, so the comic starts with a new two-page preface scrubbed of anything Super. Honestly? I think it works better than the original. 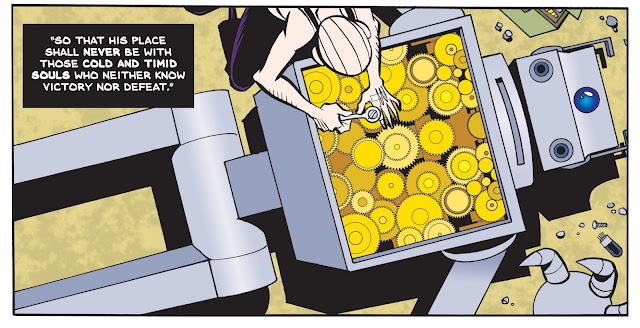 A few things about doing The Last Mechanical Monster surprised me. I set out thinking of it as a palate-cleanser--a light little story about an old man and his giant robot that didn't demand of me the angst of Mom's Cancer or even the prodigious research of Whatever Happened to the World of Tomorrow? I did it because it was an idea I'd kicked around for a long time that sounded like fun, and I needed to remind myself that comics could--and often should--be fun.

And it was! Once I got on the right track (I've explained before how I spent many months writing and penciling more than 100 pages before realizing I wasn't telling the story I wanted to tell and started over from scratch, literally on the backs of the pages I'd already drawn), The Last Mechanical Monster was a hoot! 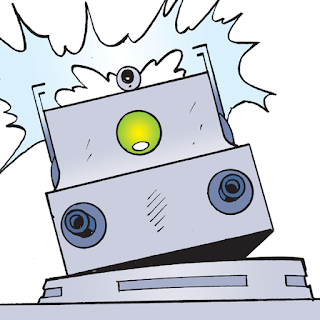 But y'know, that thing happened where the characters became kind of real to me, I felt bad when I made bad things happen to them, and sometimes they told me themselves what they wanted to do next. I found deeper themes about loss and legacy that struck a chord with me. When I finished the last page, a genuine sadness settled over me for days because I wouldn't be spending any more time with Sparky, Lillian, Helen, Chip and Ted. I missed them.

Another surprise was how deeply some readers got involved with and even moved by the story. That comes with the territory when you do comics about illness or even Space Age history, but I honestly didn't expect anybody to really care about my giant robot comic. Yet some did. I had a wonderful correspondence with a man whose father had fallen into depression when his wife died, and my comic helped him climb out of it. The father sent me a song he composed, accompanying himself on the accordion, that makes me smile every time it comes around on my playlist.

So this is a cool deal. Thanks to Shena Wolf and John Glynn at Andrews McMeel Universal. I hope you'll check it out.

In a stroke of good timing, a guy named David Ely is trying to splice together the definitive versions of the Fleischer "Superman" cartoons. They've been in bad shape for decades; Warners did a terrific digital restoration a few years ago but inexplicably introduced some errors. By combining the best of several different versions, David's trying to do the ultimate restoration. Here's his take on "The Mechanical Monsters," some of the most gorgeous animation ever done in the history of the medium, which has nothing whatsoever to do with my "Last Mechanical Monster." Enjoy it.