A Curious Book of Curious Facts 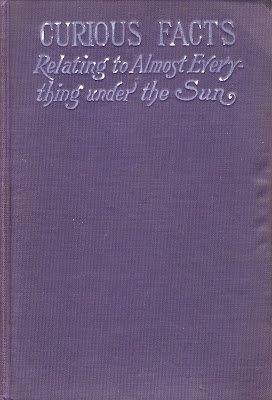 Karen is a much better shopper than I am. I skim, she digs. The downside is that I can be done with an entire store while she's still circling the first display case. The upside is that she often finds treasures I miss--such as this book I overlooked and she caught at an antiques store a couple of weeks ago. She said, "You're buying this book," and she was right.

Published in 1903, Curious Facts Relating to Almost Everything Under the Sun is an odd duck. It's a collection of brief news items, old wive's tales, "believe it or not" oddities, lists, poems, proverbs and advice organized in absolutely no order at all. It's like a Guinness Book of World Records crossed with an Old Farmer's Almanac minus the weather forecasts.

It's kept me entertained for days. Some selections:

The Flapping of a Fly's Wing
The slow flapping of a butterfly's wing produces no sound, but when the movements are rapid a noise is produced, which often increases in shrillness with the number of vibrations. Thus the housefly, which produces the sound F, vibrates its wings 21,120 times a minute, or 335 times in a second; and the bee, which makes a sound of an A, as many as 26,400 times, or 440 times in a second. On the contrary, a tired bee hums on E, and therefore, according to theory, vibrates its wings only 330 times in a second . . .

Odd Marriage Records
Married at Bridgewater, Dec. 16, 1788, Capt. Thomas Baxter, of Quincy, aged 66, to Miss Whitman, of the former place, aged 57, after a long and tedious courtship of forty-eight years, which they both sustained with uncommon fortitude.

Wonderful Echoes
Every one is familiar with the phenomenon of echoes. In a cave in the Pantheon, the guide, by striking the flap of his coat, makes a noise equal to a twelve-pound cannon's report . . . In the cave of Smellin, near Viborg, in Finland, a cat or a dog thrown in will make a screaming echo lasting some minutes . . .

Brain Impressions
It is computed by scientists that, since one-third of a second suffices to produce an "impression," in 100 years a man must have collected in his brain 9,467,280,000 copies of impressions; or, if we take off one-third of the time for sleep, 6,311,520,000. This would give 3,155,760,000 separate waking impressions to the man who lives to the age of 50 years. Allowing a weight of four pounds to the brain, and deducting one-fourth for blood and vessels and another fourth for external integument, it is further computed that each grain of brain substance must contain 205,542 traces or impressions.

Advice to a Young Man
Never whip your brain. All high pressure is dangerous. Study to think as quietly and easily as you breathe. Never force yourself to learn what you have no talent for. Knowledge without love will remain a lifeless manufacture, not a living growth. Be content to be ignorant of many things that you may know one thing well, and that the thing which God especially endowed you to know. It requires fire to fuse the materials of thinking, no less than to melt the iron in the foundry . . .

A Perfect Woman Nobly Planned
A perfectly formed woman will stand at the average height of 5 feet 3 inches to 5 feet 7 inches [sorry, Karen]. She will weigh from 125 to 140 pounds. A plumb line dropped from a point marked by the tip of her nose will fall at a point one inch in front of her great toe. Her shoulders and her hips will strike a straight line drawn up and down. Her waist will taper gradually to a size on a line drawn from the outer third of the collar bone to the hips . . . [Continued like that for five more paragraphs.]

A Boy Should Learn
To let cigarettes alone.
To be kind to all animals.
To be manly and courageous.
To ride, row, shoot, and swim.
To build a fence scientifically.
To fill the wood box every night.
To be gentle to his little sisters.
To shut doors without slamming.
To sew on a button and darn a stocking.
To do errands promptly and cheerfully.
To shut the door in winter to keep the cold out.
To shut doors in summer to keep the flies out.
To wash dishes and make his bed when necessary.
To have a dog if possible and make a companion of him.
To get ready to go away without the united efforts of mother and sister.

The Rewards of Editing
Sir--Apropos of the presently raging controversy between editors and publishers, some interest may be felt in the following list of honoraria paid to different editors of the various editions of Shakespeare, Milton, Ben Jonson, Beaumont and Fletcher:--

Some Things We Don't Know
We may come down from out pedestal for a little--there are still two or three things we don't know. We do not know, for instance, how many of our kind there are on this globe. It is, after all, but a very small portion of the world that we know anything about, and the beaten path is but a trail on a mountain. The interior of Newfoundland is a terra incognita; there are islands in the Pacific of which we know nothing more than that they exist; China and Thibet (sic) are largely closed volumes, and about many other portions of this world there is as much guess work as there was in the days of Marco Polo.

We cannot tell why of two exactly similar bulbs put into precisely similar soil one should bloom out as a tulip and the other come out as an onion. We do not know how the flowers receive their color or perfume, nor why it is that while we can catch the shadow in the camera we cannot also imprison the color.

There are many things, too, for which we have not been able to frame laws. We cannot agree as to the cause of earthquakes, the origin of volcanic fires, or the birth-throes of the whirlwind. We do not even know our own origin, and the thinking world is divided between evolution and creation. We do not even know the normal color of man, whether we are bleached from the dark original, or whether the dark races are sun-burnt editions of the early whites. Was the flood local or universal? Did Atlantis exist? Were there giants in those days? These are a few of the many questions that might be asked and remain unanswered. 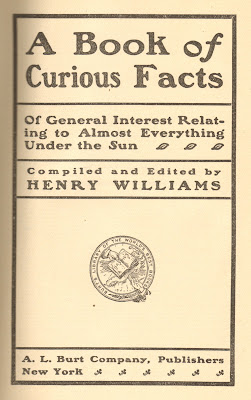 I find the whole thing pretty enchanting and occasionally appalling in its casual 19th century racism, sexism, and other -isms that wouldn't have offended anyone in 1903. As always, I can't help wondering what its writers would think if they knew someone in the 21st century would be reading their work. It seems like a very pleasant sort of immortality. I'm happy to pass it along, and look forward to working "the bard of Florence" into my writing as the earliest opportunity.