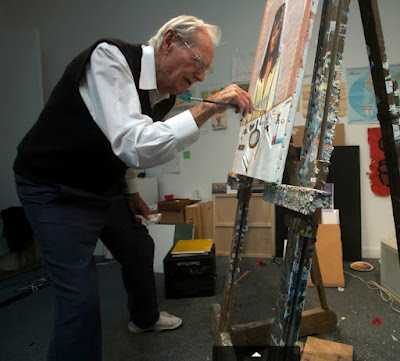 I emerge from the holiday to see that Wayne Thiebaud died at 101. I attended UC Davis between 1978-83, when Thiebaud was an active part of the art department and campus life. He, with artists like sculptor Robert Arneson, painter Roland Peterson and others, made Davis a respected center of the West Coast art scene.

I didn't take a class from Thiebaud--I don't think he taught undergrads--but I know I attended the opening of at least one of his exhibitions, since attendance was part of my studio art classes' grades (I got the impression they weren't sure anybody else would show up). I'm sure I exchanged a few words with him that I don't remember. My first-hand impression confirms his reputation: he was nice, and he loved teaching. He was certainly a highly regarded artist but not quite the Great Thiebaud he would become, and it wasn't unusual to see paintings that now sell for multi-millions hanging in the Memorial Union lobby or the halls of the art building. 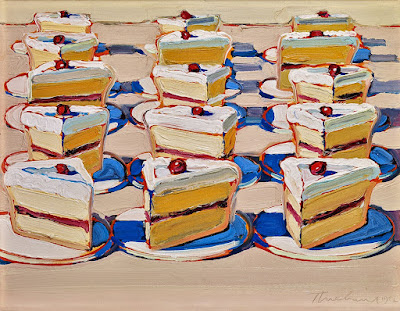 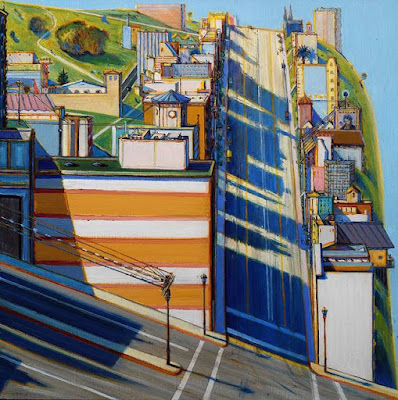 I can't say how many students realized they were in the presence of a great artist--probably not many--but those of us who were aware of it really appreciated it even at the time. To me, he always represented what a university was supposed to be: not just a place you went to take some classes and get a diploma, but a community where it was perfectly ordinary to see a world-class artist (or writer or physicist) pedaling a bicycle down the street, contributing to an educational and cultural environment I didn't really appreciate until I left it. Aside from a lifelong love of Thiebaud's art, that's my takeaway from his life. 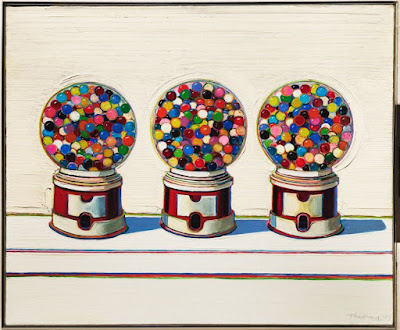 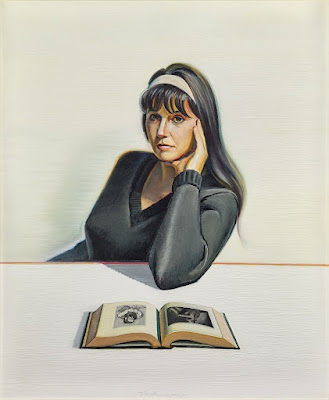 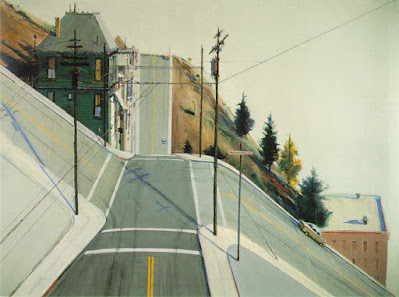 Nora's Freezin' on the Trolley

As long as I've been blogging, I've been marking Christmas Eve with a rousing round of revelry from the man who, depending on the day and my mood, I consider the first, second, or third best cartoonist who ever lived: Walt Kelly. From the great comic strip "Pogo," please accept this gift with my wishes for a good holiday and excellent 2022. 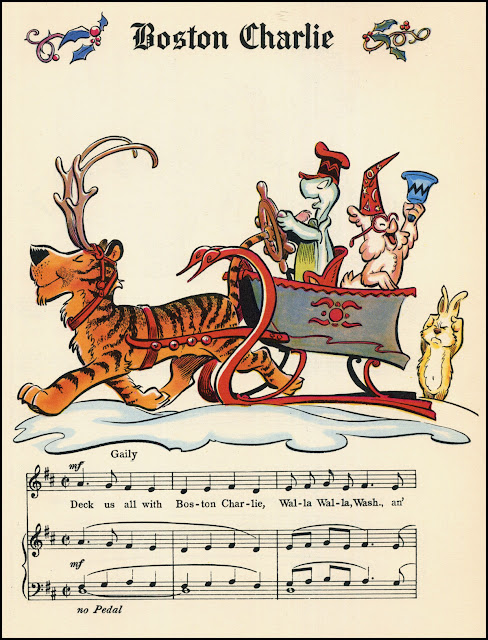 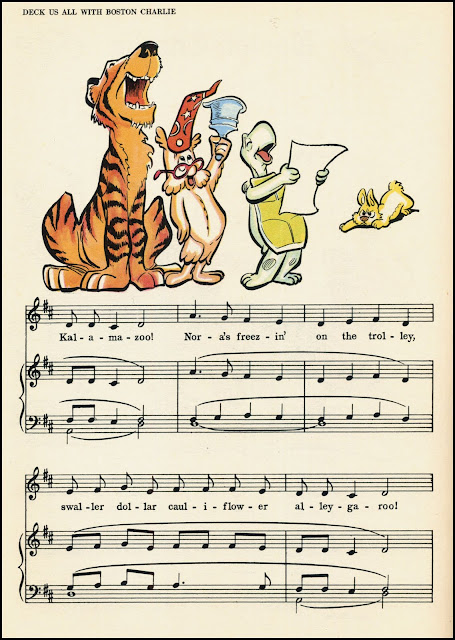 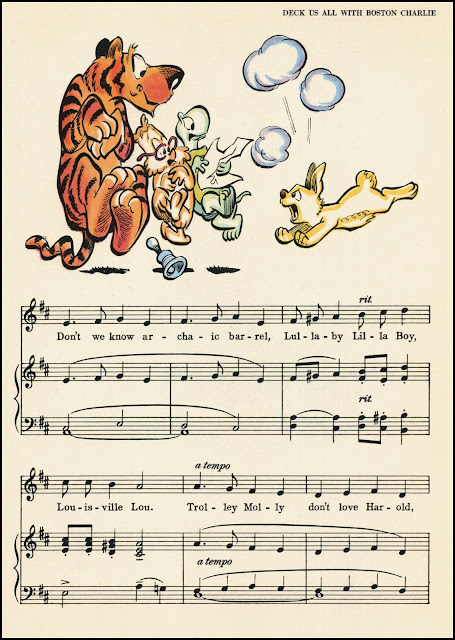 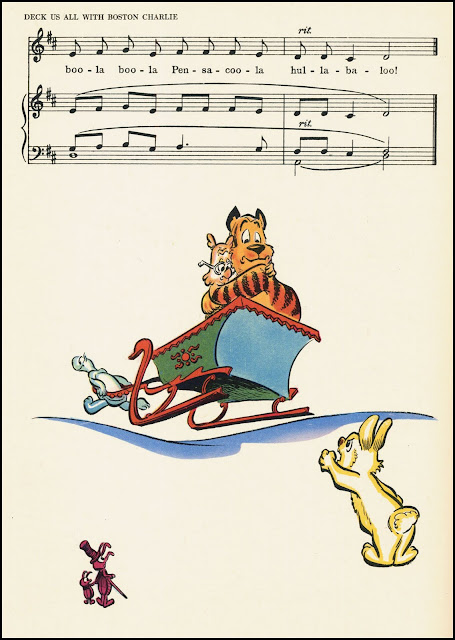 Holiday Tea on the USS Hornet

Our daughter Laura is the XO (Executive Officer) of the USS Hornet Sea, Air and Space Museum in Alameda, Calif., and a few times a year puts on an Officers' Tea to raise money to support her museum's Collections and Exhibitions Dept., always with the help of her sister Robin and a couple of hardy volunteers. We attend whenever we can--today with Karen's sister Cathy and (most of) her family. This was the first tea since the pandemic began and there were no signs of rust in the operation. Maybe 30 to 35 vaccinated folks, all of whom seemed to have a great time, with a second seating that's happening as I type this.

Part of the fun is eating and drinking from the Hornet's historic collection of plates and cups and saucers. Laura studied old photos to set it up as much like it would have been in the 1940s or '50s as possible. They put on a first-class spread, and the ticket price includes admission to the museum. Great food PLUS a day aboard an aircraft carrier?! What a deal!

It's a ton of work, but for a small museum (not physically small--it's the size of a floating skyscraper!) every dollar counts. Having it a week before Christmas makes it extra festive and special. A very nice day. 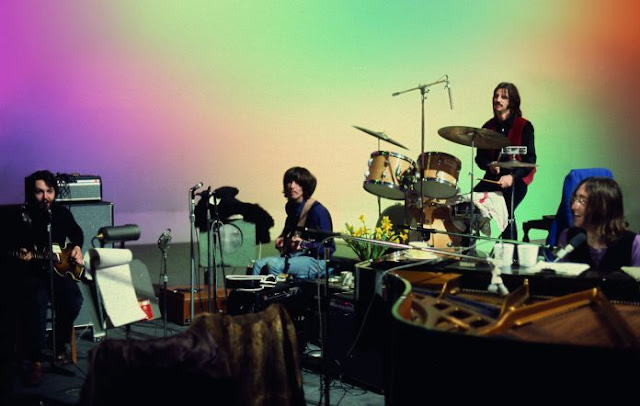 I've seen Peter Jackson’s Beatles documentary “Get Back” and have some thoughts.

I’m fascinated by the creative process. If you've ever dreamed of taking a time machine to watch Leonardo paint the Last Supper or Beethoven compose his Ninth Symphony, this is as close are you’re going to get. Like most viewers, I was thrilled to see the Beatles (especially McCartney) carve gems out of the improvisation and chaos that comprised a Beatles rehearsal. One morning, bored while waiting for John Lennon to show up, Paul turns random strumming into the recognizable beat and lyrics of “Get Back.” Chills up the spine. Something from nothing. A magic trick. A few days later, Paul sits down at the piano and plays “The Long and Winding Road” minus most of its lyrics. We know what Paul doesn’t: the words will come, and they’ll be great.

Some reviews have criticized the documentary as tedious and I understand why. There are long stretches where nothing really happens. For me those stretches feel like watching a rainstorm waiting for lightning to strike. The lads eat toast, drink beer, smoke a lot of cigarettes, read about themselves in the paper, and half-ass their performances. Paul pushes, John goofs (probably high), George sulks, and Ringo bless his heart shows up on time and does his job. Then, unexpectedly emerging from the churn: genius. "Get Back." "The Long and Winding Road." "Let It Be." "Something" ("in the way she moves, attracts me like a cauliflower..."). Joyful, inspired lightning.

What the reviewers miss is that the tedium is part of the genius. Goofing and noodling and doodling is the process. My very successful cartoonist pal Raina Telgemeier once wrote that she was starting work on a new book, which “very much resembles doing nothing,” and I’ve always remembered and loved that. You don’t get the brilliant lightning without the dull gray thunderclouds.

What I most appreciate about witnessing these works in their fetal form is the reminder that they weren’t inevitable. The world has had Beatles songs so long that they seem like permanent monuments, but there was a time they didn’t exist, and they might have turned out very differently. The boys make them up as they go. In some parallel universe a butterfly flaps its wings and “Get Back” includes the lyrics “Sidi Abdul Rami was a Pakistani, but he didn’t live at home.” That sound disastrous, but do I only believe that because I’ve heard the canonical version a thousand times? I think it’s impossible to say. I like the one we got.

I wouldn’t presume to compare myself to the Beatles, but . . .

I have sometimes felt that, at the end of the day, I’d created something that didn’t exist that morning and which nobody could have done but me. That doesn’t mean it’s good, or that anybody’s going to like it or care, but it still feels like a tiny, satisfying contribution to civilization. It’s plus one point in my imaginary permanent record. In Jackson’s documentary, we witness the Beatles rack up several thousand points.

What most impressed me with the Beatles’ creative process was they knew when to say “good enough.” That’s a lesson a lot of creative people never learn. They think their work has to be perfect so they either never begin it or never finish it. I know writers who are afraid to write a word and others who pick at a completed manuscript for twenty years. Perfection--and its close cousin, fear of failure--are the enemy of both.

The Beatles didn’t aim for perfect. Oh, they worked hard on songs, polishing and refining them, but in relatively quick time they got them good enough to meet their (obviously high) standards, recorded them, then moved on. With few exceptions, they never went back and fiddled with them (one of those exceptions: in 2003, McCartney remastered the “Let It Be” album to remove Phil Spector’s orchestrations that he never approved). No second guessing; eyes forward, on to the next.

There’s a story, probably too good to be true, about the French Impressionist painter Pierre Bonnard, who was once arrested at the Louvre for bringing a brush and palette into the museum and retouching one of his paintings on the wall. When security grabbed him he cried, “But it is my painting! I have not finished it!” The guard replied, “It is in the Louvre, Monsieur Bonnard! It is finished!”

I wouldn’t presume to compare myself to the Beatles AGAIN, but . . .

Every few years, the Abrams warehouse runs out of copies of Mom’s Cancer and they print some more. And every time, Editor Charlie asks me if I want to take the opportunity to change anything. My answer is always “No.” That book came out 15 years ago (!) and I think I’ve learned a bit about storytelling in the meantime. If I redid Mom’s Cancer today I could write it better, draw it better, structure it better, and produce a new book superior in every detail to the original—and in the process completely ruin it. It's finished. It’s a record of who I was then, telling my family's story as well as I could at the time and under those conditions, and in that respect it’s perfect.

“Get Back” is a record of who the Beatles were in January 1969, making music as best they could at the time and under those conditions. In that respect, it’s perfect.