My "Last Mechanical Monster" webcomic continues to be kind of a nice background hum in my life. It's still running three days per week on GoComics.com, the web presence of big-time comics syndicator Universal Press. In fact, we just began rerunning it when the first go-round finished after more than a year.

As I did when an earlier version of "Last Mechanical Monster" concluded on my own website, at the end of the GoComics run I offered loyal readers a chance to download a papercraft version of my giant robot protagonist. Loyal reader Curtis Hoffman did, and gave me permission to share photos of his result.

And then, Curtis composed this, which may be the best thing I've seen in the 21st Century:


If you'd like to build your own giant robot (warning: giant robot not actual size), you can download the plans here. All it takes is seven sheets of cardstock, scissors and glue, and infinite patience.

Incidentally, Curtis runs a website called "Basket Case" that reviews webcomics, so I'm answering some questions for him and will add a note when he posts them.

Thanks to Curtis for showing me what Mechanical Monsters dream of.

EDITED TO ADD: Here's that interview! Thanks again, Curtis. 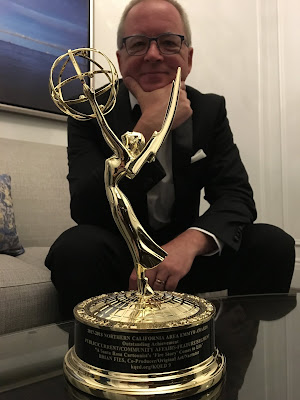 Karen and I just got home from the 47th Northern California Area (which also includes Nevada and Hawaii) Emmy Awards in San Francisco, where I was surprised and thrilled to take this lady home.

The entire thing has been pretty surreal, topped by hearing my name announced as a winner for an Emmy Award for Best Public/Current/Community Affairs-Feature/Segment for KQED's video version of my "Fire Story." KQED Arts Editor (and former Santa Rosan) Gabe Meline contacted me shortly after I posted my "Fire Story" comic online and asked if they could try to animate it. Sure, I shrugged; what the hell. Producer/director Kelly Whalen came to my daughters' apartment, where Karen and I lived for a month after the fire, to record us reciting scripted lines from our own lives. Back at the station, Farrin Abbott edited and animated. I couldn't have been happier with the result:

More than two million people watched that video after NPR linked to it. Weeks later, Kelly told me she was submitting it for Emmy consideration. That was nice and flattering. A while after that, Kelly told me it had made the cut and been nominated. That was nicer and flatteringer. But ours was still one of seven nominees in our category. I hadn't seen the other six but had no reason to believe a jury would find ours the best of the bunch.

These are regional Emmy Awards given for local news and programming, not the Hollywood Emmys for network TV series, but it's still the same organization, rules and standards. They awarded several Emmys in related categories all at once. It was a bit confusing. Also, to save time, they had all the nominees come down just before their categories were announced and wait off-stage--which happened to be right below where Karen and I were sitting, and from where she shot this video. In the first part of the video, after our win is announced, Karen pans down and you can see my gray head celebrating and getting ready to go on stage.

I know the sound quality on that isn't great. I just found this version from the Emmy folks themselves. If I've embedded it right, it should start at the right spot:

BTW, the Emmy they hand you on stage is a prop. You pick up your real one after signing for it backstage, right after which they whisk you away for an interview. If you think I look a little shell-shocked, I applaud your perceptiveness.


What a neat, extraordinary night! Mom would have loved it. Thanks again to Kelly Whalen, Farrin Abbott, and Gabe Meline at KQED who made it happen. 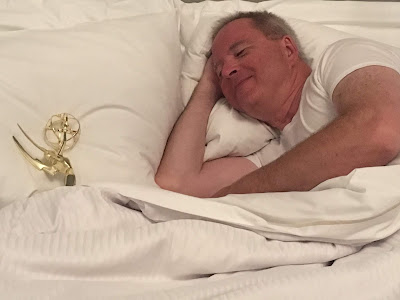