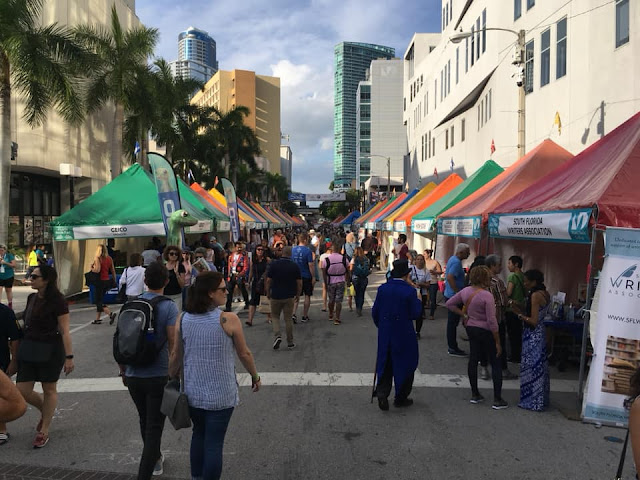 Home from the Miami Book Fair, the largest of its type of thing in the country--bigger than the L.A. Times Festival of Books, which I attended in April and is set up very similarly. This was my second time at the Miami fair; my first was 10 years ago promoting Whatever Happened to the World of Tomorrow. I've gotten smarter in the intervening decade--primarily realizing that the purpose of going to the Miami Book Fair is to promote my book (duh!)--and think I made the most of it. Plus I had a blast!

I was invited to the fair to be on a panel titled "Comics! The Memory Hole: Your Life in Pictures." Moderated by Kristen Radtke with Hevin Huizenga, David Heatley, and writer Cecil Castellucci, the panel drew about three dozen people. I loved the theme. We talked about how memory and memoir work, how accurate memory really is, how you decide whose and which stories to tell, and how comics may be the ideal medium for stories like memoirs. Afterward, we all signed books, and also had opportunities to sign stock at booksellers' tents set up on the street.

The great value of events like the Miami Book Fair is never the panels you do or the books you sell, which by themselves don't come close to making the trip worthwhile. It's what happens in the times and spaces between.

Editor Charlie brought me a gift that requires explanation.

Waaay back in 2006, Mom's Cancer was nominated for a Quill Award. Never heard of it? The Quills were a short-lived attempt to create a fancy high-profile televised awards show for books. So I flew to New York City, and Charlie and I black-tied our way to the Museum of Natural History where we enjoyed an enormous banquet in an auditorium with a full-scale blue whale hanging from the ceiling.

One of the Quills' fatal flaws, in my opinion, was letting the public vote on the winners. The public has terrible taste. In a year in which people like Doris Kearns Goodwin, E.L. Doctorow, Maya Angelou, Joan Didion, and the Dalai Lama all published books, the Quill Book of the Year Award went to Tyler Perry's Madea character for Don't Make a Black Woman Take Off Her Earrings. That's my sour-grapes way of explaining why Mom's Cancer didn't win.


This is where I formulated Brian's First Law of Award Shows, which is that if the organizers seat you such that there's a huge staircase between you and the stage, you aren't winning an award.


Anyway, to make a long story short (too late), Charlie and I soothed our hurt feelings by stealing the plaster centerpieces. I took one, he took one, eleven years later mine burned up, and last night Charlie gave me his. 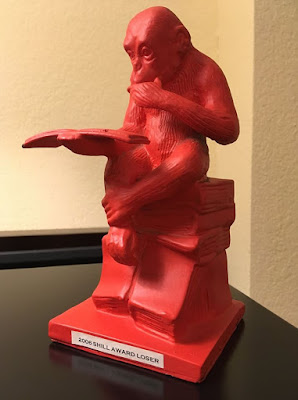 Despite losing the Quill, the night turned out to be one of the most memorable of my life. That was the night Charlie introduced me to Quill presenter Chip Kidd and his partner Sandy McClatchy, and we went back to Chip's astonishing apartment to sip brandy while sitting on his balcony overlooking the lights of Manhattan, planning a Batman opera that never got made.

BTW, that was also the night I passed Donald Trump going up a long marble staircase while I was going down, and I could have prevented this whole mess and made it look like an accident if I'd only known. Such is a world without time machines.

So Charlie's gift is a reminder of a night I lost an award and ended up not caring at all, and having a friend who understands how much a stupid red plaster chimp can mean.

A Boy and His Tiger 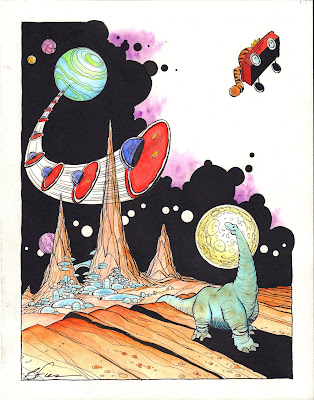 Now it can be revealed: a few months ago my pal Andrew Farago asked if I'd do a drawing for an auction to raise money for the Cartoon Art Museum. I was happy and excited to, especially given the theme: "A Boy and His Tiger: A Tribute to Bill Watterson!"

I understood my charge to be celebrating the comic strip "Calvin & Hobbes" in my own style without actually using those characters. Here's what I did. It's about 11 x 14 inches, ink and watercolor on watercolor paper.

CAM has gotten contributions from cartoonists such as Patrick McDonnell, Harry Bliss, Mo Willems, Lynn Johnston and more. Early next year they'll all be exhibited at the museum, and sometime soon auctioned off on eBay. Visit HERE to see a few more, and watch for more to come!

And thanks to Andrew and CAM for letting me play with them.
Posted by Brian Fies at 11:19 AM 0 comments


Like many in the comics world, I'm stunned to hear of the death of Tom Spurgeon, the Comics Reporter--journalist, writer, editor and critic whom it seems everyone in the community knew and respected.

I can't claim Tom and I were close but he was an early champion of my work going back to Mom's Cancer, and his knowledge and passion for comics were unmatched. He loved to shine light on good work that deserved attention. Tough but fair and kind.

I think we'll hear a lot of stories in the next few days from people whose lives and careers Tom made better. I'm one of them.
Posted by Brian Fies at 1:28 PM 0 comments