See the previous post for context for this series of posts excerpting colorful insults from Mark Twain's autobiography . . .

Today's target of Twain's ire is the proprietor of a block of luxury flats in London called Queen Anne's Mansions, where Sam Clemens and his family stayed during an extended visit in 1899. Mrs. Clemens needed to do some shopping, so Clemens tried to cash the equivalent of a Traveler's Check called a "circular check" at the front desk:

"I sent down a circular check to the office to be cashed--a check good for its face in any part of the world, as any ordinary ass would know--but the ass who was assifying for the Queen Anne Mansions on salary didn't know it; indeed I think that his assitude transcended any assfulness I have ever met in this world or elsewhere.

. . . It was strange--it has always seemed strange, to me--that I did not burn the Queen Anne Mansions."
Posted by Brian Fies at 10:20 AM 0 comments

Email ThisBlogThis!Share to TwitterShare to FacebookShare to Pinterest
Labels: Mark Twain Insult of the Day 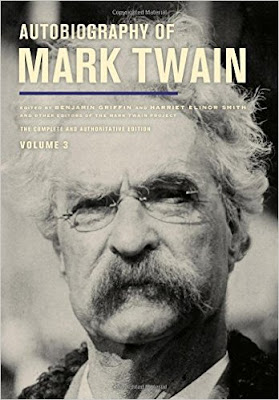 I'm reading the third volume of Mark Twain's autobiography, which I wouldn't recommend to anyone but am enjoying immensely.

That's not necessarily a contradiction.

The first volume, published 100 years after Sam Clemens's death per the terms of his will, was a surprise bestseller. I found mine on a pallet at Costco. But I suspect that book's ratio of "Copies Sold vs. Copies Actually Read" rivaled those of Stephen Hawking's Brief History of Time and Allan Bloom's Closing of the American Mind. Volumes 2 and 3 did not follow Volume 1 onto the bestseller list. Friends told me they couldn't get through 20 pages of it.

I sympathize. It's tough sledding on a dry hill, especially the early chapters which are organized to satisfy completist academics but frustrate casual readers. I've found the whole thing (a couple thousand pages worth) delightful and rewarding but wouldn't push it onto anyone.

Twain rejected the idea of writing a typical chronological autobiography. Instead, he dictated whatever was on his mind that particular day over the course of several years, reasoning that was the best way to really understand a person's thinking and life. Sometimes a day's entry took him back to his childhood in Hannibal or his early writing career in California. Just as likely, he'd spin off of something he'd read in that day's newspaper. Each two- or three-page bite feels like a one-way conversation sitting at Clemens's side. The upside is tremendous immediacy. You Are There, witnessing history. The downside, I think, is lack of depth, organization, and introspection. Clemens, for all his wit and self-awareness (he gleefully admits to basking in his reputation as a great man of letters), wasn't his own best analyst.

The beauty of the autobiography is that Clemens was aware of that, too, which was another rationale for writing it as he did. He realized that baring his thoughts nearly free-association style would reveal more about him to readers than even he knew himself. I think he was right.

Which is all prelude to this: In my long-ago days of reading Volumes 1 and 2, I posted irregular excerpts under the heading "Mark Twain Insult of the Day." Of all Clemens's writing, I think I love his insults the most. They're vivid, incisive, and paint perfect little portraits that sound like people we all actually know. Today's involves a British novelist named Marie Corelli, a casual acquaintance who, in this episode, roped Clemens into accepting a lunch invitation against his better judgment. Clemens didn't like Corelli. At all.

Mark Twain Insult of the Day #13
"I think there is no criminal in any jail with a heart so unmalleable, so unmeltable, so unphazeable, so flinty, so uncompromisingly hard as Marie Corelli's. I think one could hit it with a steel and draw a spark from it.

"She is about fifty years old, but has no gray hairs; she is fat and shapeless; she has a gross animal face; she dresses for sixteen, and awkwardly and unsuccessfully and pathetically imitates the innocent graces and witcheries of that dearest and sweetest of all ages; and so her exterior matches her interior and harmonizes with it, with the result--as I think--that she is the most offensive sham, inside and out, that misrepresents and satirizes the human race today."