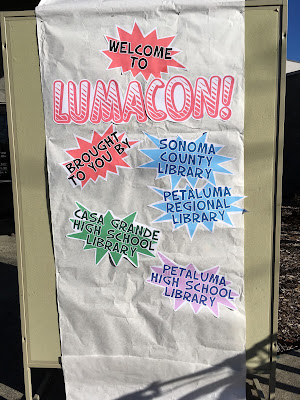 I looked back through my previous three LumaCon posts to try to avoid reusing any superlatives for my favorite comics-related event of the year, and decided to use them anyway. Yesterday was the fourth annual comics convention organized by librarians in Petaluma, Calif., and I had a great time. I hung out with old friends, met a lot of young artists and comics fans, got a nifty gift basket, and even sold a few books and miniposters. After spending all my earnings buying other people's books and art, I felt pretty good walking away even.

I love LumaCon because it's small and sincere. Admission is free. They have a bake sale. It's aimed at, and I think to some extent organized by, kids. One of its big attractions for me is walking in and finding a pro who's been making comics for 20 years sitting beside a 12-year-old showing off their first homemade comic. LumaCon has a very different feel than any other convention I've attended. It's gentle, encouraging, entirely positive. Everybody's just there to have fun.

There's something else about LumaCon that I haven't quite been able to put into words before: because it's free, it's easy for folks to just drop by and check out. Curious people who might have been driving past and happened in, or parents whose kids love comics and want to find out what it's all about. There's an outreach aspect to it that encourages everyone to be on their best behavior.

I didn't have much to show this year. The fire destroyed all of my original art and my stock of Whatever Happened to the World of Tomorrow books. However, I have replenished my supply of Mom's Cancer. I printed up a miniposter of A Fire Story. Best of all, my daughters Laura and Robin dropped by to help, and brought their pinback button-making machine. For $1 they'd turn any quarter-sized drawing you brought them into a button. They also sold a few with my drawings on them. It was the hit of the day.


Behind Robin in that photo above is my friend Jason Whiton, a teacher and writer who sells a great range of mid-Century pop artifacts: secret agent adventures, mod styling, Thunderbirds, etc. Our mood dampened mid-afternoon when Jason got a text telling him that cartoonist Mort Walker ("Beetle Bailey") had died. Jason grew up knowing the Walkers and other great cartooning families in Connecticut, so the news was quite a blow. For my money, Mort's 1970s book Backstage at the Strips is still the best description of the cartooning life in its Golden Age.

After four years of LumaCon, organizer Nathan told me he finally felt like he was getting the hang of it. Everything seemed to go all right. I advised him that the only thing I feared was that it would get too big and ruin everything I love about it. He agreed. They'll fight to keep it right-sized.

Somewhere around 3000 people came the last couple of years. As far as I could tell, they were the right people coming for the right reasons.
Posted by Brian Fies at 11:25 AM 0 comments