Yesterday I posted the final page of my Last Mechanical Monster webcomic. I published two per week since November 2013 and am proud to say that in 170 pages I never missed a deadline.

However, I confess that the four-month backlog I began with evaporated to about two weeks' lead time at one point, until I fought back to being about a month ahead by the end. If I had advice for potential webcomic creators that'd be near the top: don't even start posting until you've got a big cushion built up, then don't let it slip away. One of the points of doing a webcomic is practicing professionalism. Pros hit deadlines.

I won't repeat what I wrote over at my webcomic's "Coda," which you can go read if you're interested. I will say that it's been an interesting, gratifying experience. The Last Mechanical Monster developed a nice little fan base that grew over time, as I'd hoped. A few noteworthy mentions on other sites brought surges of curious readers for a couple of days, some of whom seemed to stick around. Nothing spun the ol' visitor counter faster than a mention on Metafilter following the announcement of our Eisner Award nomination in April. Not even close. At times like that you really get a visceral, almost scary feel for the power of the Internet when roused from its slumber to focus its gaze on you.

The Last Mechanical Monster was a story I wanted to tell, struggled a few years figuring out how to tell (you may recall my tale about drawing 110 pages of it before deciding I didn't like that version and starting over from scratch), and then sat down and did it. Sitting down and doing it is where a lot of creative people get hung up, but there's no short cut or substitute. Ideas and good intentions are useless if you don't execute. One day you've got to turn a blank sheet of paper into Page 1. That's very hard to do!

It's been great. Meanwhile, I'm knee-deep in a new project I've never discussed publicly, but which my editor and I think would make a terrific book. More on that when appropriate. I've got one or two other potential projects lined up behind that one. There's also a possibility that The Last Mechanical Monster will be published in full color, but no contracts have been signed so that's all I can say about that. Too many ideas, not enough time.

Thanks to my Last Mechanical Monster readers. Thanks to two different panels of Eisner Award judges who thought it worth nominating for Best Digital Comic two years in a row. Thanks to the folks who reviewed, mentioned, or linked to my comic, it made a big difference. From my perspective the whole project couldn't have gone better, and I appreciate it. 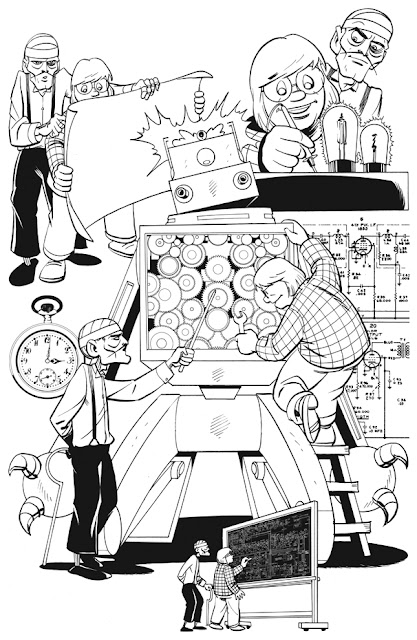 Readers of Whatever Happen to the World of Tomorrow may recall that I began the book with the 1939 New York World's Fair, which (I argued) first presented a common vision of a technologically sophisticated future to millions of people. So Karen and I were shopping at an antiques store today when she asked, "What year was your fair?" 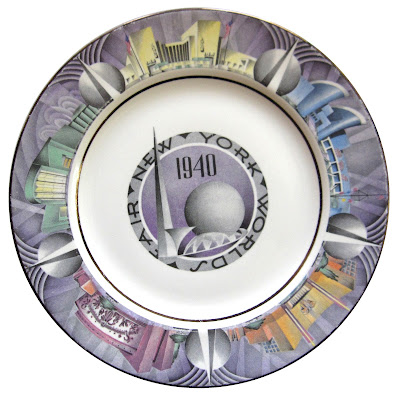 She'd found this beautiful plate from the fair highlighting the event's signature Trylon (tall pyramid) and Perisphere (sphere), and five of its great show buildings. Though the fair began in 1939 it ran until 1940. The plate's back has a sticker saying it was made to commemorate the 150th anniversary of George Washington's inauguration, which was one of the Fair's big themes.

Look at those colors! That Art Deco styling! It's a gem.

eBay tells me I got a really good deal on it. It'll go on my wall and always remind me of three things I love: the 1939-40 New York World's Fair, my graphic novel, and my sharp-eyed wife.

I'm annotating individual pages from my book Mom's Cancer as they're posted on GoComics.com. These are my notes on Page 5 (May 14).

From a storytelling point of view, the game board metaphor does a couple of things.

It compresses time and delivers a lot of exposition. If I'd wanted to, I could have expanded any one of these "game squares" into a page or more of comic, but because a lot of the activity didn't directly involve Mom I wanted to get through it quickly.

It also stresses the role that random chance played in the quality of treatment Mom received. She ended up with very good care but could very easily not have. Remember, the osteopath at upper left was a quack . . . I mean, a giant duck. If Mom made any missteps at all, it was relying too much and too long on an incompetent primary care physician who (in my opinion) didn't know the first thing about cancer. I don't know if it made any difference.

This element of chance comes up again in the story. I thought it was a strong enough theme or motif that when it came time to design end papers for the print version of Mom's Cancer, I drew a token and a die (double meaning intended) pattern. Life is  a crapshoot.


Starting today, Mom's Cancer will appear on GoComics.com twice a week instead of once. A week between pages was just too long, I thought (and some readers agreed with me). I'll see if  twice per week helps the pacing. I could post a new page every day, but would be done with the entire story in a few months! Happily, GoComics seems to be up for any way I want to do it, so we'll give it a try. Let me know what you think.

I'm annotating individual pages from my book Mom's Cancer as they are posted on GoComics.com. These are my notes on Page 4 (May 11).

Now I have to tell you about the Duck.

My original conceit for Mom's Cancer was that my family would look like people but everyone else would be depicted as animals or objects that somehow symbolized their personalities, as in Alice in Wonderland or Animal Farm. I first drew Mom's osteopath as a duck because she was . . . a quack. (Necessary disclaimer: I'm not insulting osteopathy in general; I'm sure there are some good osteopaths doing good work. Mom's was not one of them.)


The problem was that there weren't many other characters in the story, and my high-concept symbolism didn't seem appropriate for the next one. Or the next. After a while, the osteopath was the only non-human character in the whole thing, and people reading it for the first time online began to ask, "Uh, what's up with the giant duck?"

Later, when we began thinking about editing for print, I hinted online that I might change her into a human. Fans of the Duck who'd understood my intent in the first place erupted in outrage (i.e., politely voiced mild disagreement). I think I made the right decision, but I gave Mom's duck--er, doc--a little lapel pin as a nod to her history and her champions.

I'm annotating individual pages from my book Mom's Cancer as they are posted on GoComics.com. These are my notes on Page 3 (May 4).

There's a convention that comics characters wear the same clothes all the time--Charlie Brown's striped shirt, Clark Kent's blue suit. The "pro" of this convention is that it keeps the characters recognizable: once the reader gets used to seeing the characters dressed in a particular way, they don't have to stop and figure out who they are when they show up later. A uniform helps identify them. The "con" is that it's unrealistic. Cartoonists beginning a long project need to think about which way they want to go. In Mom's Cancer the characters wear the same clothes most of the time; when they change clothes late in the story, it helps signal the reader that time has passed.

I admit I didn't put a lot of thought into my own pants and polo shirt ensemble when I began Mom's Cancer. I don't even wear polo shirts that often! However, I dressed Mom in a striped long-sleeve shirt because I knew the stripes would be graphically interesting and draw the eye to her, the story's protagonist. I wanted Mom to be the center of attention whenever she appeared.

Similarly, I gave Kid Sis a sweater with a big floppy collar to emphasize the slenderness of her neck. In cartooning shorthand, skinny necks = youth, and thick necks = age. Nurse Sis and I are older than Kid Sis, so we have thicker necks and rounder curves (and Mom, even older, has hardly any neck at all!).

These are some of the things I think about when designing characters.

By the way, my college friend Tina recently told me that she remembers me sitting slouched exactly as I've drawn myself in today's page of Mom's Cancer (Page 3). So I got that right.