LumaCon 2--the second annual comics convention put on by local librarians for kids and families in the town of Petaluma, Calif.--is over, although I'm sure there are still librarians folding up tables and sweeping up napkins as I type. The con aims to get students and fans in the same room with comics pros, often sitting side by side. I think they fulfill their mission spectacularly.

Last year's LumaCon was popular enough that they moved to a bigger site for this year's, with actual separate rooms for activities and panels. The fear was that scaling up would ruin the charm. They needn't have worried. Any con that has a bake sale, a costume parade, and a Lego room is doing everything right in my book.

As an invited guest I sold some books at a table and took part in a panel on "Comics as Literature." They gave me a gift basket. Nobody's ever given me a gift basket to come to their con before.

My gift basket included cuff links. I'm still trying to figure that out. But they're cool!

LumaCon was also free! I told organizer Nathan Libecap I thought that was insane, and he explained that they couldn't charge admission because library blah-blah school district blargy-blargh. There's some good reason. It's still insane.

The bulk of the floor space was occupied by Artists' Alley. The building lobby hosted bookstores, comic book sellers, and toy vendors. Culinary arts students served teriyaki and sushi. Side rooms hosted Magic card tournaments, craft tables, Legos, and quiet spaces for students and pros to talk. There were plenty of costumed folks, though I didn't think to take any good photos of them. Late in the day, organizers announced that 2400 people had attended. That felt like a good number.

For me, selling books is secondary to seeing my local cartooning friends and meeting new people interested in comics. One story that sums up my LumaCon experience: a father and grandfather brought their autistic boy, I'd guess about 14, to show people his drawings. At the previous LumaCon they'd bought him a book on "How to Draw Dragonball Z," and for the past year he'd meticulously mimicked those manga lessons, but also done some original work in his own style. We all talked for several minutes--the boy not so much talking as shoving one drawing after another at me from a manila folder. I gently critiqued and encouraged. Afterward, Dad took me aside and explained that they had feared his son would never talk, until they figured out that comics unlocked his mind. The boy could say that Superman's cape is red. Reading and drawing comics changed his life.

By the way, my wife Karen and daughters Robin and Laura came and were a big help manning my table, but I'm forbidden to show photographic proof. I also wish I'd had more time to talk to several personal friends who dropped by to say "Hi," but it was great to see them. Thanks especially to our friend Marion, who sent us some of her own photos. 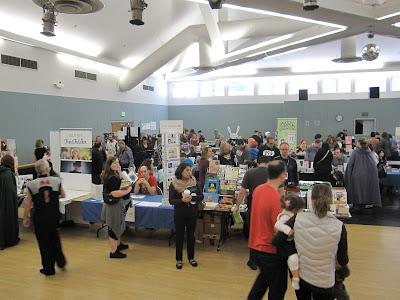 I don't mean to oversell it. After all, LumaCon is just a little comics convention, but I find it uniquely fun and satisfying. It's small, intimate, charming, low-key. The opportunity to mix with people who are just there because they love comics is rarer than you'd think. The people organizing it are motivated solely by their love of the medium and their students (they'd better be, because they're evidently forbidden to make a dime on it). They treat their guests right (cuff links!).

I told a couple of them that, like Linus's pumpkin patch, LumaCon is the most sincere comics convention I know. Still is.

As the song goes, "I've been one poor correspondent." I'm busy working on secret-for-the-time-being projects that might turn into books. I find that Facebook is a good home for little bits of news or comment that I once would have blogged about (which is no good to anyone who isn't my Facebook friend, I know). Also, I kind of feel that after 10 years of blogging I've said a lot of what I've got to say.

Still, the Fies Files haven't been abandoned, and I can imagine business will pick up here in a few weeks or months when I can talk about the projects I can't talk about.

Just wanted to mention now that I'll be at this Saturday's "LumaCon" comics convention in Petaluma, Calif. I'll be holding down a table diffidently selling my books, and also taking part in a panel at 1 p.m. The con is Saturday, 10 a.m. to 4 p.m., click that link for details.

I went to the first-ever LumaCon last year and had a terrific time. One of my best convention experiences ever, no kidding. It's organized by librarians with the purpose of bringing kids together with creators, and I found the whole thing low-key, small-town, and very sincere. Here's a blog post I wrote about it. This year's is in a larger facility. It's also free! I don't know how they do that. Seems to me they oughtta at least charge a couple bucks a head just so people'd appreciate the effort that goes into it.

In mid-February I've been invited to the University of Michigan in Ann Arbor. I'll be talking to a class on Health & Society that's reading Mom's Cancer, then speaking at the Ann Arbor District Library that evening. I'm in town one day only: Tuesday, February 16. More details on that later.

If there's anywhere more fun than Michigan in February, I can't imagine it.

Otherwise, all is well. Hope the same is true for you.