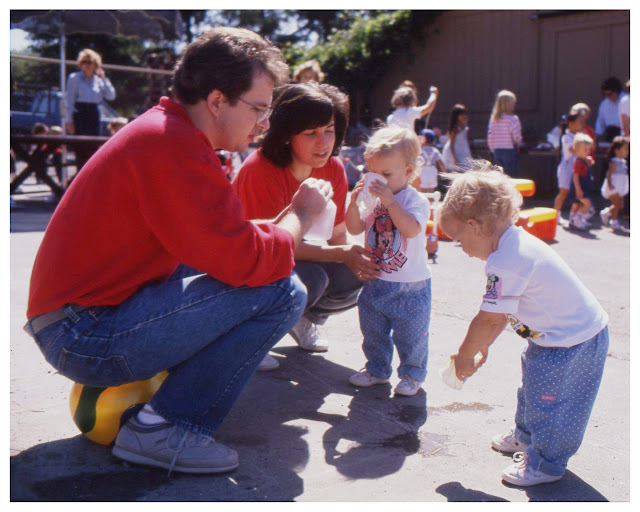 The story of this photo might be the best thing you read today.

When our twin daughters were born, Karen and I joined a “Mothers Of Multiples” club. Fathers were welcome, too, but that would have ruined the acronym. It was a while ago; our girls are all grown up now.

Parenting more than one same-aged kid at a time is hard, and the club was a great source of support, commiseration, and what today would be called “life hacks.” Once in a while we’d all get together for a picnic. When Laura and Robin were about 18 months old, a reporter and photographer from our local newspaper, the Press Democrat, joined the party to do a feature story.

No big deal. The club included a family of baby quadruplets, and we figured the article would focus on them. So we were surprised to wake up the next morning and see a photo of us taking up half the front page above the fold. We enjoyed being celebrities for a day and bought an 8-by-10 print of that photo from the PD, which we hung happily in our family room until it burned down last October 9. 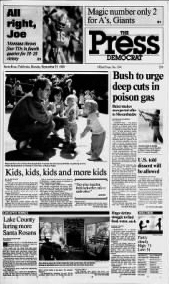 After the fire, my daughter Robin tried to find the photo for us. As an archaeologist, she has access to a nationwide database of old newspapers and found the right date, but of course the quality of the digital copy was far too poor to reproduce. She emailed the PD but didn’t hear back. Roadblock.

Meanwhile, I wrote and drew “A Fire Story,” which the PD published in a beautiful two-page spread. So when Robin told me what she’d done and where she’d gotten stuck, and asked if I knew anyone at the PD, I sent Features Editor Corinne an email with the subject line “A Favor.”

Corinne replied that she had very little hope a photo that old had survived. Not only had the paper changed hands since then, resulting in a thorough housecleaning, but the entire field of photography had transitioned from film to digital. But she said she’d try.

The staff photographers told her there was no chance. As a last resort, Corinne sent administrative aide Dominique down to the archives. And in an envelope in a folder in a file cabinet in a dungeon entombed in lead type and pulp-paper dust, she found a strip of negatives shot that day at the picnic.

Corinne called it “an overdue karma payback.” We agreed that some archivist back in the day must have taken one look and decided it was just too adorable to throw away. I think the universe decided it owed us one. This photo will look great on our new wall someday.

However, our happy story has an ironic twist ending.

The photo above is NOT the picture published in the paper. It’s almost the same, snapped moments before, but not quite. The negative for the published picture is still missing. I think I know what happened to it.

My theory is that our negative wasn’t in the envelope with the others from that shoot for one reason: because all those years ago, we bought a print of it. The photographer took the negative out of that very envelope to make our copy and didn’t put it back. We can't have it in the present because we already had it in the past. I lived in an O. Henry time-loop paradox for decades and never knew it.

If so, that’s almost a better story than finding the right negative would have been. 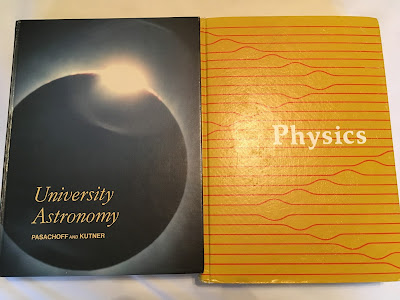 Acquired! When it comes to reconstructing my pre-fire library, I've decided not to try. Mostly I'll pick up new books I'm interested in and let my collection grow organically. But there are a few old must-haves--books that were especially important or useful to me--that I'll go out of my way to find.

These were my freshman university astronomy and physics books. The market in 40-year-old textbooks isn't as robust as you might imagine, but they were relatively cheap and easy to find. I'm not one of those people who scoff that they never use the math they learned in school; I use it every day! Sure, I haven't solved a partial differential equation in a while, but algebra, geometry and trigonometry are fundamental to how I see and interact with with the world.

Similarly with these books: I used to pull them off the shelf all the time! Some of the astronomy's out of date, but the workings of gravity, light and energy haven't changed much in a hundred years. For me, these were references as basic as a dictionary or thesaurus (which, I know, "online," yadda yadda). I feel like I've been reunited with old, warm friends.
.
Posted by Brian Fies at 7:44 AM 0 comments

First of what I hope will be an unnecessary series explaining how things work.

We've been hearing a lot about "Clean Coal" lately, most recently in the president's State of the Union address lauding America's "beautiful Clean Coal." I realized that neither he, nor most people with very strong opinions about it, had any idea what it means. What the world needs is more learnin' from cartoonists, especially one who also spent 20 years working as a science writer for the energy industry.

Clean Coal is not a type of extra-special coal. It's a way to burn coal more cleanly. 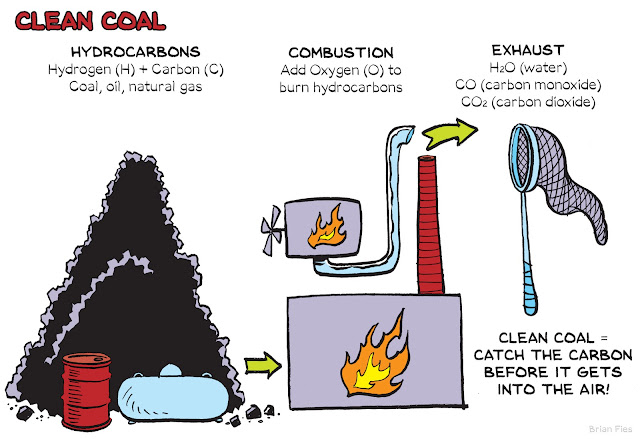 Coal is a hydrocarbon. So are oil, gasoline, natural gas, propane and methane.

They're called "hydrocarbons" because they're made of hydrogen (H) and carbon (C).

When you add oxygen (O) and burn them in a car engine or power plant, you release energy and recombine all the H's, C's and O's in new ways. For example, you make H2O (water), which is why you see water dripping from a car's tailpipe. You make carbon monoxide (CO), which is why you don't leave your car running in a closed garage. And you make carbon dioxide (CO2), which is a greenhouse gas that traps infrared radiation and helps drive global warming.

It doesn't matter if you believe global warming is real. It's happening whether or not you believe in it.

So burning coal blows carbon out your power plant's smokestack into the air. Clean Coal is a general term for catching it before it gets away. The Department of Energy (DOE) has spent decades researching different techniques and technologies to do it. In recent years, they reached one solid conclusion:

All Clean Coal methods raise the cost of generating electricity and hurt the energy efficiency of their power plants. While some of them look good technologically, none of them make the least sense economically. Depending on where you are in the country, other energy sources--even solar--are already cheaper than regular coal power. Adding the cost of capturing coal's carbon exhaust makes it one of the most expensive fuel sources around. Given that, DOE cut research on Clean Coal a few years ago.

Clean Coal has nothing to do with political philosophies, the specialness of American coal, or the hopes and dreams of our noble coal miners. It's an approach to burning coal cleanly that for now--with our current economy and technology--just doesn't work.

I'll bet it took less than two minutes to read this post, and now you know more about Clean Coal than the president of the United States and most of Congress. Take the rest of the day off.