I liked this thought-provoking essay, "Mistaking Researching for Writing," by comic book writer Ron Marz. I'd recommend it for anyone working on a creative project and wondering whether they're doing so much research they'll never get around to writing, or so little research their writing will sound false and lack conviction.

"How much research is enough? After two decades of writing fiction, I've come to believe the answer is 'Enough to fool the audience into thinking you did a lot more research.'"

"No one wants a book report. They want a story."

"Depending too heavily upon research can be the death of imagination, or at least the submersion of it. One of the gifts of writing fiction is making it up. Revel in it."

You all know a writer who's spent months or years building a fictional world--drawing maps, diagramming family trees, classifying exotic flora and fauna--but never quite getting around to setting a story there. Maybe that writer is you. Research can become a bottomless pit if you let it.

It's an issue I've faced on all my projects to different extents.

On Mom's Cancer, most of the story was taken from my family's real lives. However, I also took a lot of notes as events happened, and researched a lot about cancers, treatments, prognoses, etc. (which of course I was doing anyway).

On Whatever Happened to the World of Tomorrow, I researched my butt off. The book covers four decades of Space Age history that I was determined to get right. For each decade I pulled together facts, figures, reference images, and original source material totaling about 3000 pages worth for a 208-page book.

Always uppermost in my mind was the fact that (as Marz said) "nobody wants a book report." If I drew a lamp post in 1939 or a fallout shelter in 1955, you can be certain I had references for it. But I tried to never rub the reader's nose in it. Instead, I hoped the cumulative effect of a thousand unconscious correct details would lend the whole book some credibility and verisimilitude. A few folks have told me that's what they like about it.

I learned to resist the urge to include material just because I'd done a lot of research on it. Yeah, it took me three days to dig up that nugget, but if it doesn't contribute to the story it has to go.

I'm working on some new projects now that also demand pretty deep research, both historical and scientific. Again, my goal is to fold all of that in so it helps the story without drawing attention to itself. I badly want to get it right. I also want to get it done.

Sometimes I think that's where Melville went wrong with Moby-Dick. Dedicating three chapters to how sailors tie knots is just showing off. More seriously and recently, I've read a couple of epically long graphic novels that I think could have profitably been cut in half if their authors had been less interested in telling us all they'd learned and more interested in their stories.

In my experience, writing and research go together. Often, you don't realize what you need to know until you begin to write. In turn, research sometimes suggests directions you could take your story you may never have considered.

In the course of writing Whatever Happened to the World of Tomorrow, it amazed me how often I needed some bit of information only to have it miraculously appear days later. Like, I'm writing about the most obscure incident or factoid imaginable, and BOOM the New York Times or NASA prints an article about it. I didn't even have to hunt for it; it found me! The same thing is happening on my new projects. The universe provides. It's almost eerie.

Do your research. Do your world building. Keep it in mind as you craft your story, but don't let it become the story. And if you story gets to a point that requires contradicting your research, and you think you can get away with it, err on the side of telling a good story. That doesn't mean you can say the first Moon landing happened in 1944 (unless you're doing a sci-fi Moon Nazi tale, then go for it!), but if you always thought your Realm of the Dragons was in the North and it suddenly makes more sense for your hero to find it in the South, make the change. It's not supposed to be a straitjacket.

"One of the gifts of writing fiction is making it up. Revel in it."

Karen and I enjoyed a pre-Anniversary getaway last weekend. I won't bore you with the details or a droning travelogue, but I did want to share one photo that I found particularly thought-provoking: 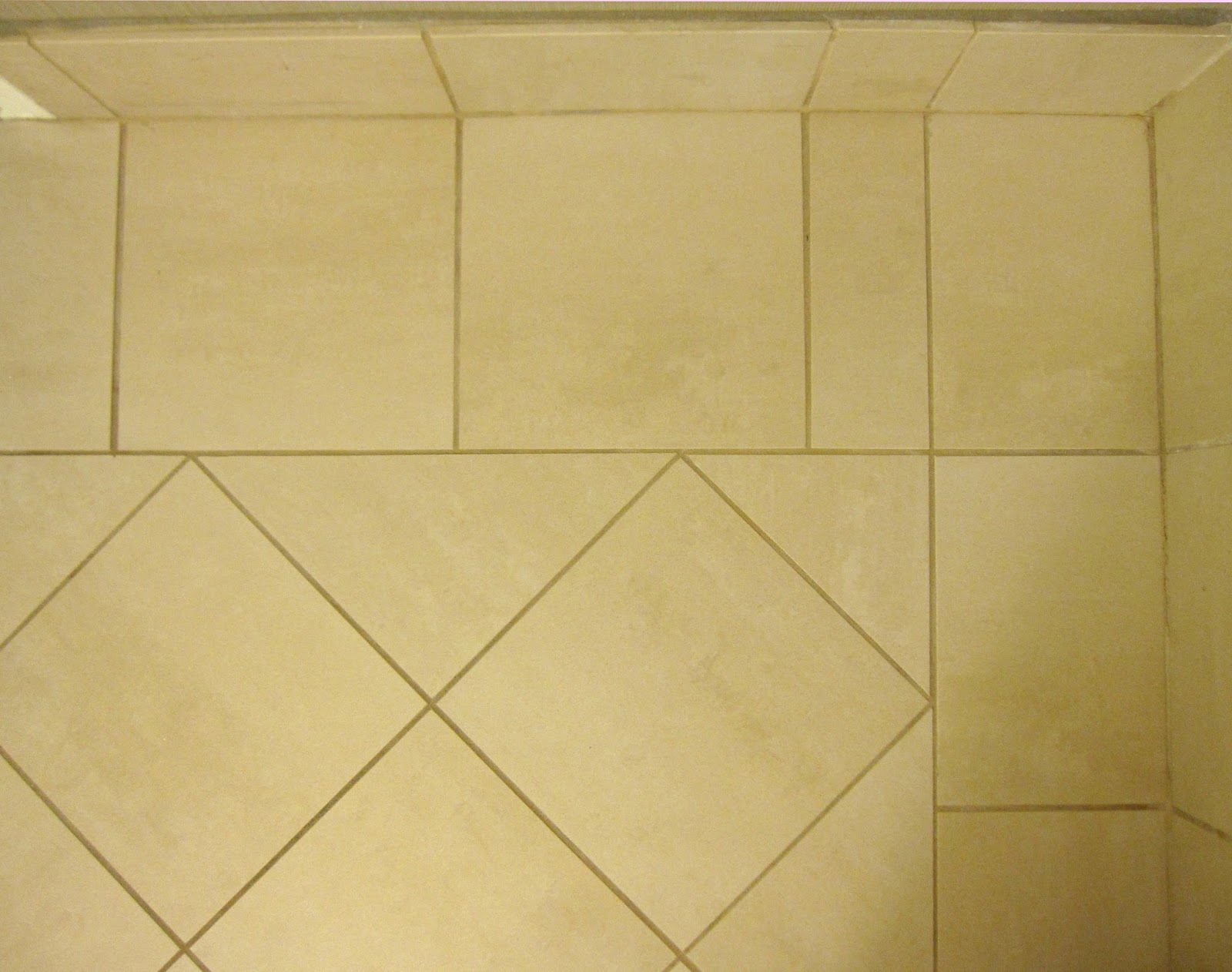 That's the tile in the floor of our hotel bathroom. As I had the opportunity to contemplate it, I got to thinking about that extra filler tile (marked in green in the photo below), and wondering how you'd lay out tiles to avoid that awkwardness. As a result, I figured out something that I imagine every professional tile layer learns their first day on the job, but it was news to me.

Or it's possible I totally knew this before, forgot it, and rediscovered it. That seems likely. Doesn't matter; forgetfulness keeps things fresh. 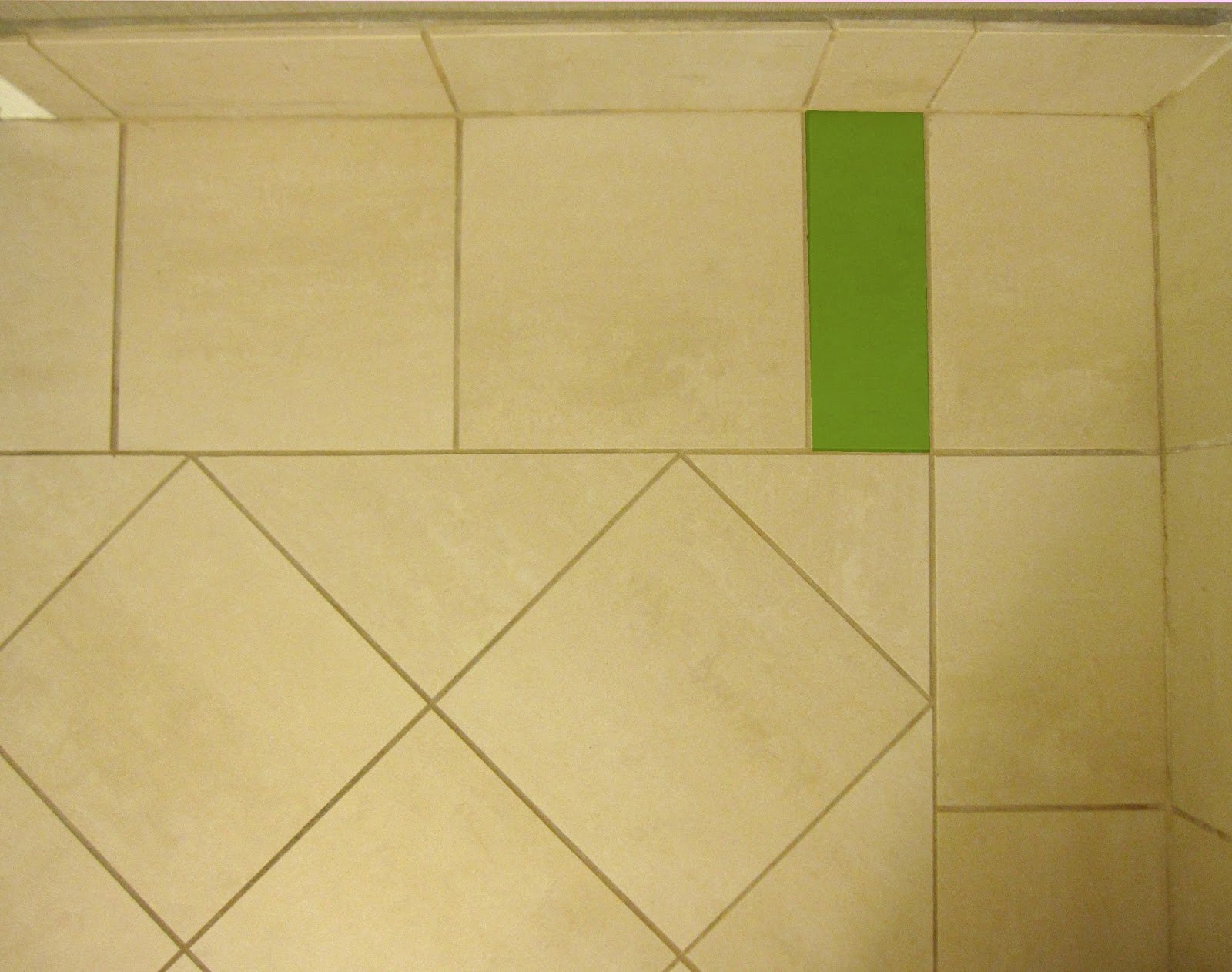 The square tiles are all the same size. Those on the inside of the pattern are turned 45 degrees from those on the outside (while others are cut in half or quarters to fill the gaps). They don't space out evenly because the diagonal of a square is (naturally) longer than the length of its sides. In fact, as we all remember from Pythagoras, they're wider by the length of their side times the square root of two. 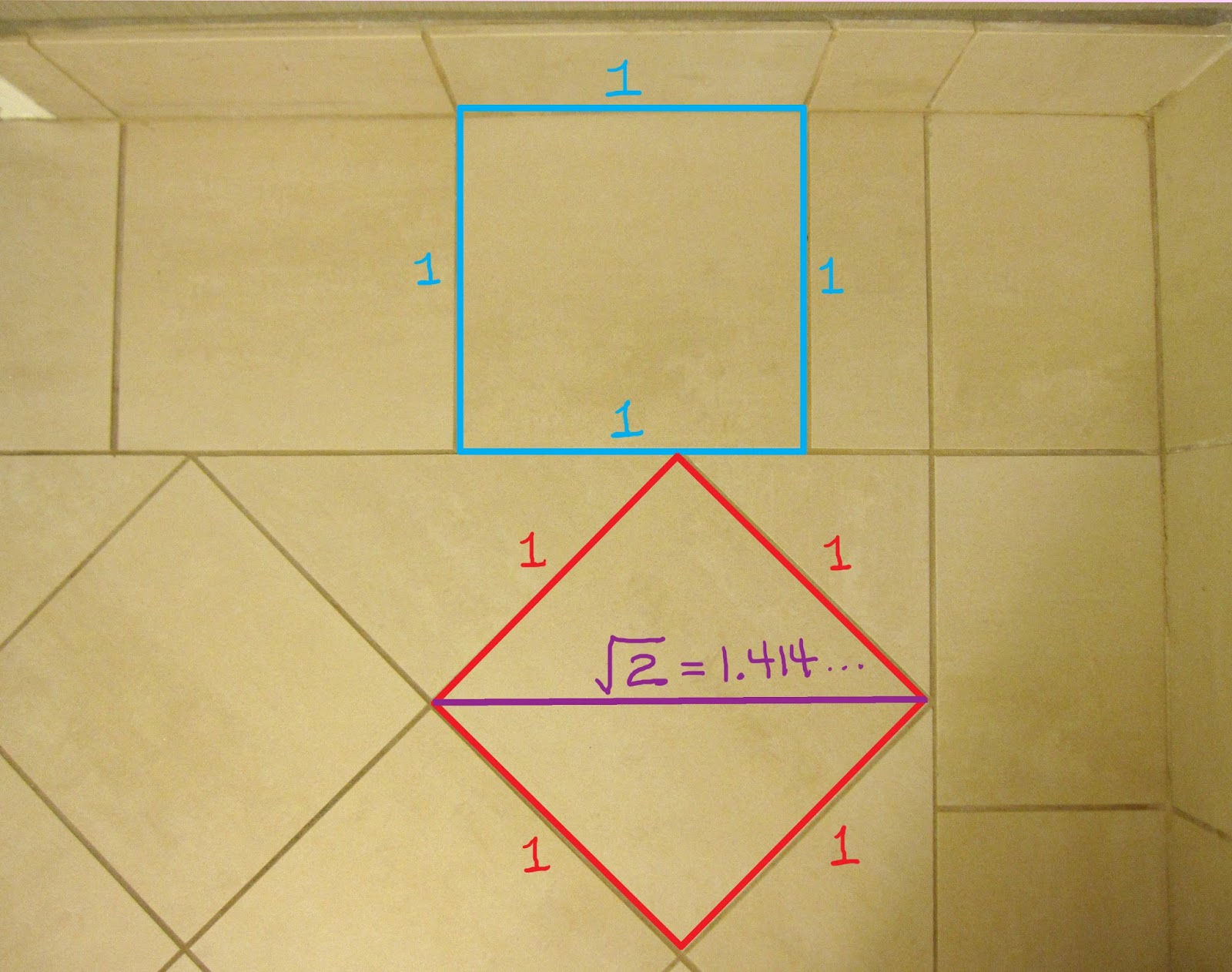 Since the square root of two is an irrational number whose decimals never repeat or end, the straight and diagonal tiles can never come out exactly even. However, we craftsmen in the tile-laying trade know that a little extra grout covers a lot of sins. How close can we get?

Because the square root of 2 is about 1.414, the first obvious answer is that if you laid out 141 straight tiles next to 100 diagonal tiles, you'd be off by four-tenths (0.4) of a tile. Increasing the separation between each of the 100 straight tiles by only 0.004 of a tile--just a skosh--would fill in the difference.

But we can do better.

You're left with just a little piece of diagonal tile hanging over the edge--again, a pretty easy imbalance to fix simply by spreading out the 14 straight tiles a bit.

Now the thrill of discovery was making me light-headed. Could I do even better? Dare I try?! 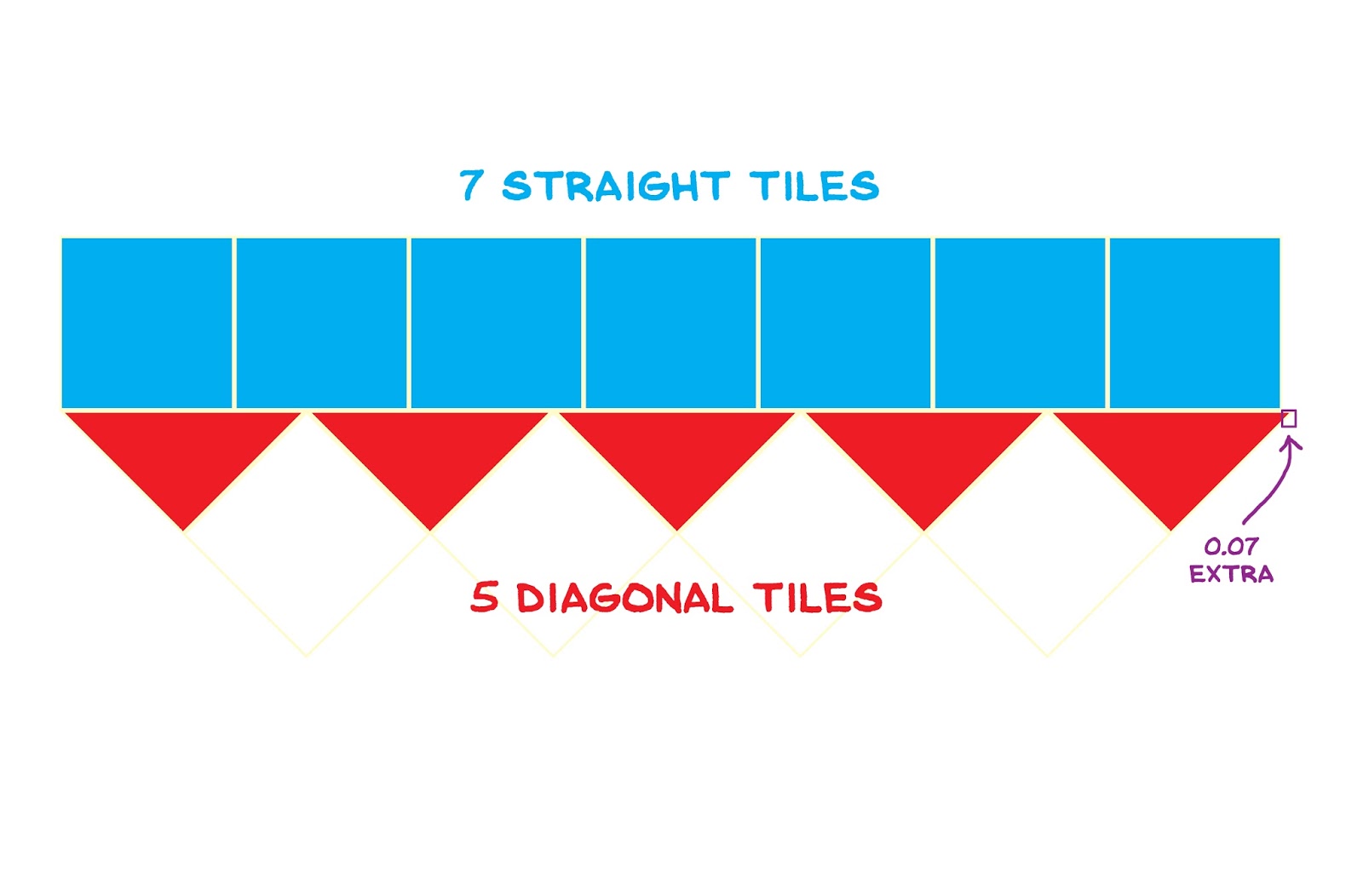 If anything, that's even better! It's . . . it's so elegant! So beautiful! I began to weep. Luckily I had two-ply nearby.

Now here's the part that blew my mind and convinced me this had to be a blog post. I counted how many tiles wide the actual bathroom was. Six. Six straight tiles wide, plus that filler tile. The poor blighters almost made it! But wait . . . There's that border of skinny tiles on the right. And the more I looked at that border, the more convinced I was that if they'd just omitted it, they could have laid a seventh tile and gone all the way: 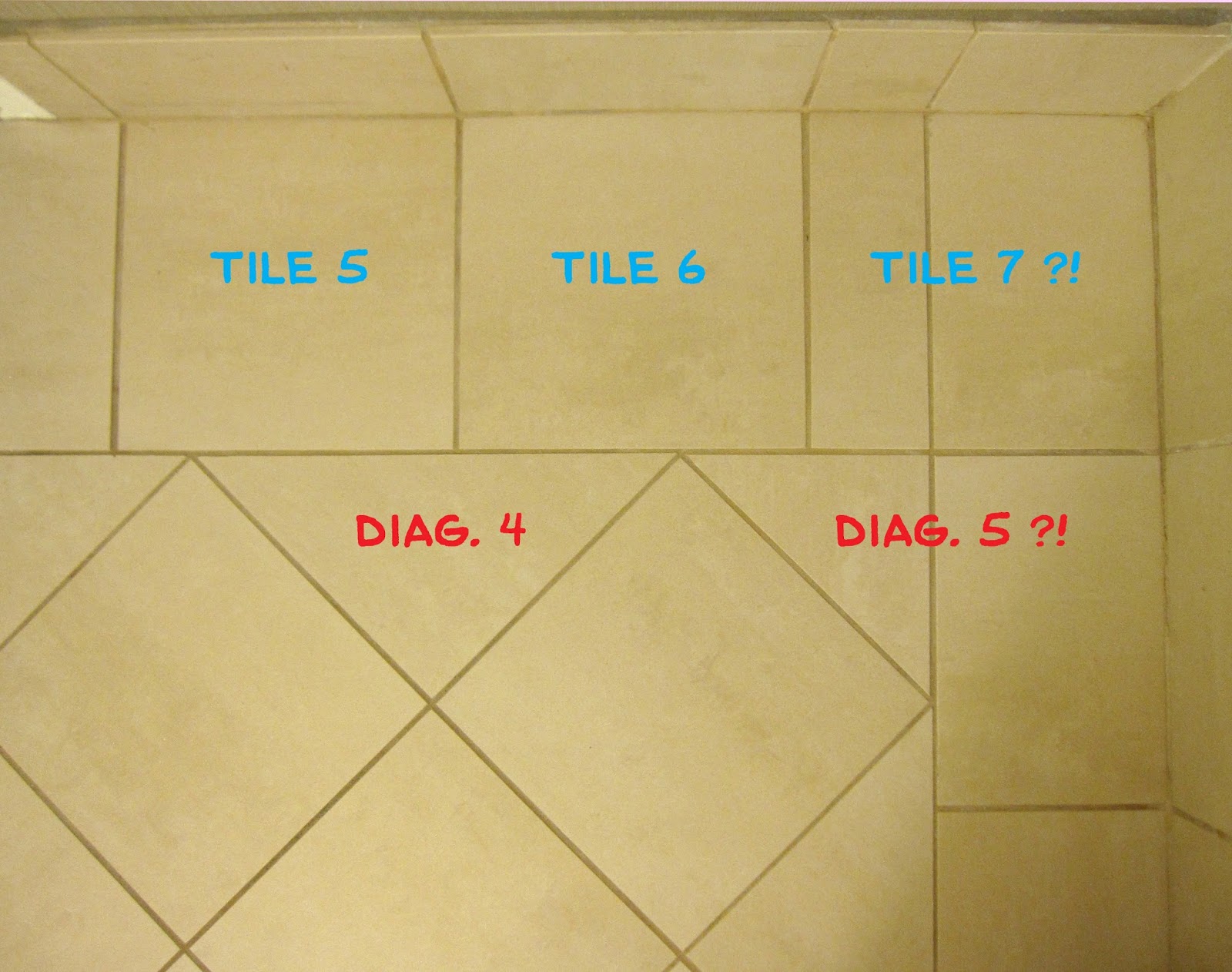 NOOOOO! So close! They were headed for the end zone and fumbled on the 1-yard line!

Karen and I have been married long enough that she barely even rolled her eyes when she saw our photos uploading and asked why I'd taken a picture of tile. She muttered something about knowing what she was in for when she married me. And she married me anyway.

Aw. We lost another comics pioneer today, with the death of Irwin Hasen at nearly 97. He had a good run.

Mr. Hasen drew comic books almost as soon as the form existed, working on titles such as The Green Hornet, Green Lantern and The Flash beginning in 1940. He created the DC character Wildcat. After serving in World War II he returned to comic books, then began the work he may be best remembered for, the comic strip Dondi, in 1954.

I didn't know Mr. Hasen but I met him a few times, and he was always happy to share his wisdom and stories with anyone who asked. He was short, charmingly profane, and told great tales about the Depression Era gangsters and prostitutes he'd known growing up on the tough streets of New York City. Some of them might have been true.

Below is a blog post I wrote in July 2006, after running into Mr. Hasen at the San Diego Comic-Con. As I've mentioned elsewhere once or twice, being called an "S.O.B." by Irwin is a highlight of my comics career. He was one of the Golden Age greats. I'm sorry we've lost him but I'm glad we had him.

I love the old guys.

The comics industry is famous for devouring its own. I know good, professional artists in their thirties forced out of the business for lack of work while thousands of eager teens line up with sketchbooks in hand ready to take their places. Short memories and fickle trends turn today's creative heroes into tomorrow's tired hacks. There's precious little appreciation or respect for the men and women who began and built the business--many of them still alive, some of them still working.

I've mentioned how I originally met Irwin Hasen in February at my book launch party at the Society of Illustrators in New York. I saw him again the next day at the New York Comic-Con, selling prints of the old DC characters he drew plus originals from his long-running comic strip "Dondi." I only took the time to greet him briefly, and left New York regretting that I'd let an opportunity slip through my fingers.

Last Thursday I saw Mr. Hasen again, set up in Comic-Con's Artists Alley. No one was at his table; in fact, I had to elbow my way through a line of fans queued up to meet the Hot Young Artist at the table next door to get to him. I reintroduced myself and we had a nice conversation.

I looked over his table and saw only prints. No originals.

"Oh, I remember you had some Dondi originals in New York," I said, disappointed. "I was really hoping to see them."

Mr. Hasen gave me a conspiratorial nod, pulled a portfolio from under the table, and slid out a dozen "Dondi" strips. We continued to talk as I flipped through them, figuring out which one I wanted to buy. At last I chose my prize.

EDITED TO ADD: Here's a very good profile of Mr. Hasen the New York Times did in 2011. Recommended reading.

EDITED TO ADD MORE: Mark Evanier posted this trailer for a documentary about Mr. Hasen. I haven't seen the film, but this trailer gives you a good sense of the gentleman and what it was like to talk to him for even a few minutes. I don't think they make characters like him anymore.


AND here is his obit in the New York Times.
Posted by Brian Fies at 8:14 AM 0 comments