I stole that post title from Dave Barry since he's not using it.

A client returned a draft of a paper I'm writing with the word "advisor" changed to "adviser." The latter is company style now. It's not my place to object aloud--I'm just a hired gun and both spellings are legitimate--but in my head I sighed. I don't have an Oxford English Dictionary in front of me, but my sense is that "advisor" predates "adviser" and is falling out of favor. To my eyes it's a more graceful spelling, "a more elegant weapon from a more civilized age" [Obi-Wan Kenobi, 1977]. Besides, if you spell "advisor" with an "e," what happens to the word "advisory?" Advisery? That's just monkfish ugly.

Different clients and markets have their stylistic quirks and peculiarities, and adapting to their different rules is part of the writing gig. I recently edited a paper (the one I griped about with the Japanese author) that had to be completed in British English. Large companies often have long lists of words, acronyms, phrases and usages particular to their industries. My natural default style is that of the Associated Press, which was beaten into me pretty quickly when I worked as a newspaper reporter fresh out of college. On the other hand, my publisher Abrams adheres to the Chicago Manual of Style, which made for some interesting arguments with Editor Charlie.

One of the delights of language is that it evolves; one of the complaints of curmudgeons is that it evolves on their watch. Ben Franklin grumped to Noah Webster about the fashionable use of the new verbs "notice," "advocate" and "progress," which up to his time had been only nouns. I cringe at the word "alright" but fear that battle's lost (I blame The Who). On the other hand, I don't mind that using "hopefully" to mean "I hope" is gaining ground despite being a clear grammatical foul. I think we need a word that performs that function. Hopefully I can bring myself to use it someday.

You know what else we need? "Amn't." We have "isn't" for "is not," and "aren't" for "are not," but there's no good modern contraction for "am not." I've seen some grammarians propose that we legitimize the use of "ain't" for that situation. Ain't gonna happen.

I love "gonna" for informal writing but would never use it in something someone paid me for.

I remember when I was learning cursive, I was taught to write a capital "Q" that looked like a big number "2." Even as an innocent child in the sixties, I knew that was bogus. When my own children were taught cursive, I was happy to see that they learned a sensible "Q" (an "O" with a little tail) and that the big-2 "Q" had gone the way of the f-shaped "S."

Happily obsolete in my lifetime.
. 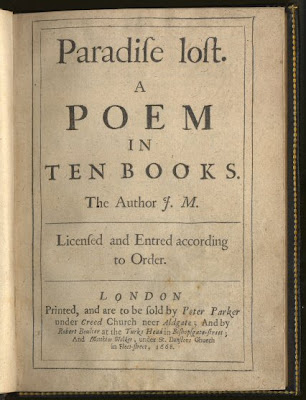 Not actually titled Paradife Loft, although that would be an excellent
name for a rock band [Dave Barry, 1983-present].
On the other hand, I hear that a lot of schools don't even teach cursive anymore ("who needs to handwrite when everyone types everything?"), which is a mistake. There's something about the rigorous rote regimentation of mastering those shapes that I believe disciplines both body and mind. Besides, if no one knows cursive, who's gonna read all of great-granddad's letters? Professors of hieroglyphics?
.
In the preceding paragraph, "rigorous rote regimentation" was a little over the top alliteration-wise, but I couldn't resist. Similarly, in the preceding blog post, writing "silver sliver" made me smile.
.
When's the last time you saw "Penmanship" as a line item on a report card?
Ditto "Deportment."
No, I did not use an inkwell and slate board in school.
Things change in other languages, too. When I took Russian in college, a cursive lower-case "d" transitioned from a letter that looked like a lower-case "delta" to one resembling a lower-case "g." I resisted the change until one day a grad student told me I wrote like a grandma. I understand the Germans are phasing out their use of the double-S or "scharfes S," which looks like a Greek "beta." That's a shame. It had style.
.

That's "GROSSE," not "GROBE."
.
Today I learned that it's very hard to google the phrase "German SS" and find information about German orthography.
.
Despite what your fourth-grade teacher taught you, there's nothing wrong with starting a sentence with "and" or "but." But you should be very, very, very, very, very careful. And have a good reason.

My favorite punctuation mark is the semi-colon; my second-favorite is the double-dash or m-dash (see paragraph 2 above), which many people don't realize is legitimate punctuation. It is.

What? Doesn't everyone have favorite punctuation marks?

Best book to buy a budding writer: Strunk and White's Elements of Style. I've given it to a couple of kids. You can tell the real writers because they sit down and read it cover to cover. I crack it open every few years myself. Even if you disagree with the old farts' answers, at least you're thinking about the right questions.

"It's" and "its": learn the difference. Alright?

I expect some of you to disagree with me. That's the fun.
.
Posted by Brian Fies at 9:41 AM

Thanks for brightening my day, Brian.

I kinda agree, but only sorta.

what kind of an idiot changes advisor to adviser????? you say it was a PAID idiot?

sigh. don't get me started....i'm doing freelance editing of dissertations for fun & pocket change, and every time i see "is comprised of," my eyeballs rotate in their sockets!!

nobody knows nothin' any more.

you go, brian! you can call yourself mr language person. love it. too bad, barry....you left it unattended with the keys in it

and omg, do you know what the verification word is tonight? feinsaw...haw

I agree with you. Really.

I had been a "news" editor until last year at this time, so I do understand what you are communicating.

Some of my favorites: "its"/"it's," and the use of alleged, allegedly, accused of when someone was just arrested for some crime (because we don't know if they did it or not, so let's head off the lawsuit for defamation of character, please), and, oh yes, the redundancies were fun (12 noon; just say noon).

Thank you for a great read.

Y'all know about Bob the Angry Flower, right?

Hmm...I'm probably guilty of every faux pas you mention. (Except for its/it's . . . I know the rule for that one) Loved this, Brian!

Sherwood, thanks for the comment, you're more than welcome.

Ronnie, isn't that spelled "sourta" where you're from? Or, in French-Canadian, "sourteaux"?

Xtreme, I'm glad you've got my back. Idiots who sign my checks can put any words spelled however they want into their papers. My name's not on it. "You left it unattended with the keys in it" is very funny.

Celesta, thanks. Redundancies are hard to catch. Many of them seem to crop up naturally and go unnoticed until you really examine them. As for "alleged," I always enjoy seeing it used to describe someone who's actually been convicted of the crime. At that point, I think you can safely drop the weasel word.

Sandra, love you anyway. Besides, that's why we have (and need) editors. I can't believe how much they catch.

Yes, the post-conviction misuse of "alleged, accused of" is another lovely mistake that I find happens mostly in writing copy for TV news (at least in this region).

Have a good one!

Nobody understands the pain of spelling and grammer wonks.

Ronnie and ronnie can be sorted (sic) out by the capital letter or lack thereof, or by the picture of ronniecat's cat. My spellings originate a few miles south of hers.

Oh no! I got the wrong Ronnie! I do know the difference, I'm just not always observant. In fact, some would call me downright oblivious.

I try to distinguish between common usage vs. purist rules without getting into actual misuse of language -- my particular issue is use of the conditional "may have" vs. "might have" ("Looking both ways may have saved his life" rather than "might have saved his life." Big difference that many writers and editors don't know.)

That's as opposed to the editorial objection to "Everyone loves their Jane Austen," which is perfectly correct and does not require a sex-based singular pronoun. For proof, Google the sentence and prepare for laughter.