Added to the long list of Things I Did Not Know:

George Lucas asked David Lynch to direct "Return of the Jedi." It's very difficult, but mind-meltingly fun, to imagine how that movie might have turned out.


The only thing I know about "Return of the Jedi" that most people don't is that I went to college with a super-nice girl who played an Ewok. She was a little person and we worked the same student job together--I drove double-decker buses and she was one of the conductors in the back who got passengers on and off, signaled stops, punched transfers, etc. During summer vacations she went off and made movies (and has continued to, building a very successful career in film and TV). You know that scene where two Ewoks get blasted and one crawls over to its dead mate? She was the Ewok who lived. I'd mention her name but I'm afraid she'd Google herself, read this post, and tell y'all she has no idea who I am, which would completely ruin one of my few "brush with greatness" stories. 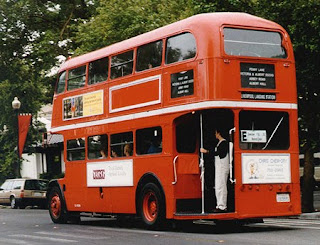 I worked my way through college driving these authentic old London double-deckers for a university transit system. Very unusual clutches. Drivers sit in a little cab in the front (right side, naturally) while conductors stand on the platform in the back. One of the best jobs I ever had.
..
Posted by Brian Fies at 10:57 AM

This post led me to a-Googling, and to two surprises:

1) According to IMDb, there were 66 credited actors playing Ewoks in Return of the Jedi. Wow!

2) That bus system is not only still operating, but is enormously successful and still student-run, serving not only the university but the community as well. I had no idea that a system like that existed anywhere.

There was an teacher at my high school who had been an ewok in ROTJ... That was as close as I ever came to SW greatness.

The best part of the first movie was the unexpected nature of its phenomenal success. The second did some fine-tuning on that audience appeal. By the third, the urge to sell toys had overwhelmed the urge to tell a story.

(Perspective was probably different for those of us experiencing the trilogy as parents rather than kids.)

As I've said elsewhere, I think return of the Jedi would have been more watchable if they traded the Ewoks for a tribe of Eraserhead babies.