Here's Installment #1. So the challenge of designing characters for Mom's Cancer, which started as a webcomic a couple of years before being published in print in 2006, raises the question: What's to design? It's a true story about real people, so just draw the people, right? To some extent, that's true: 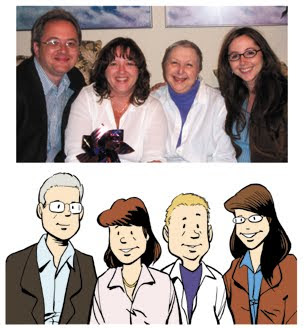 Me, Nurse Sis, Mom and Kid Sis in life and in Mom's Cancer

Still, I had choices to make. For example, my first inclination when I sat down to draw a comic about cancer was to make it dark, bleak, Gothic, with lots of scritchy-scratchy cross-hatching. I could've drawn the characters as wrinkled, blotchy, warty grotesques and it would've been just as true.

I quickly rejected the idea. It seemed too obvious and "on the nose." It'd already been done. More importantly, I wanted people who'd never read a graphic novel to read Mom's Cancer, and I didn't want the art to repel them. I decided to go the opposite way: make the art as open, friendly and inviting as I could, and then hit the reader with this story that I knew had enough drama without cranking the Pathos Knob up to 11. I deliberately adopted a style and form reminiscent of a 1950s newspaper comic strip; I privately thought of Mom's Cancer as "Family Circus in Hell." That approach informed my character design. But I still had decisions to make. Character by character:

Kid Sis is the youngest, half a generation younger than me. Her features are sharp--her chin pointy, her nose pert, her smile broad, her neck long and slender (elementary cartooning shorthand: the younger the character, the skinnier the neck). I used her glasses to make her look more wide-eyed, innocent and alert than the rest of the characters.

Nurse Sis and I are approximately the same age (to keep family peace, I won't say exactly how much younger than me she is--assume it's a lot). Our jaws are rounder, our noses more bulbous, our hairlines higher, our necks thicker, our faces and bodies more pear-shaped as gravity slowly pulls their contents down. And of course I've got gray hair. Unlike Kid Sis, we've both got a little line under one eye, making us look a bit more baggy and tired.

To be honest (and I've never mentioned this before), my character design for Nurse Sis is one I've used for 20 years in a lot of different comics projects. She didn't start out as my sister; originally, I think she was a short-tempered blue-skinned alien. Later, she was a medieval knight's squire. She was an actor in my repertory company of players that I was already very comfortable drawing who just happened to bear a passing resemblance to Nurse Sis, so I put her on the stage one last time before retiring her.

Mom was 20 years older than me. Her head and body are even more pear-shaped, her nose protuberant, her posture often poor, her jawline jowled into her neck. I drew a little line under both her eyes instead of just one. Life weighed heavier on her, especially in illness. I gave her a striped shirt because I knew it would be interesting to draw and always pull the reader's eye toward her.

I gave each character distinctive hair and clothing. They passed the Silhouette Test. Despite starting with what I thought were pretty decent designs, most of the characters evolved over the months I drew Mom's Cancer. They strayed "off-model" as I drew them over and over, polishing them. It happens in a lot of comics. Usually, a character's look changes fastest in its early days and then more gradually, as the cartoonist figures out what works and standardizes it. 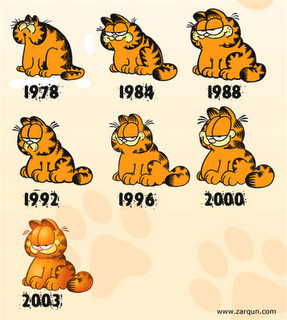 Garfield changed a lot over time, although the most drastic revision happened in his first few years.

When I finished Mom's Cancer and began to prepare it for print, I was struck by how much the characters had wandered, sometimes so much that I had to redraw them to match. Nurse Sis evolved the least because I'd already been drawing that character for years. Kid Sis and I changed a bit; I didn't have to redraw us much. Mom changed the most. 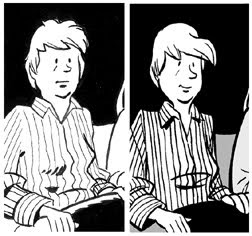 An early drawing of Mom from the webcomic (left) and as I redrew it a couple years later to match how her character had come to look.

I think that happened because her character didn't start with a strong design. Her head and body weren't any particular shape, her hair was kind of a shapeless shag. I didn't get her right to begin with. The same difference is apparent in the original and redrawn panels below. 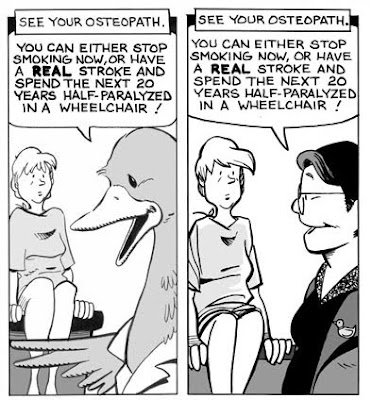 Ah . . . I see you've noticed the giant Duck. There are obscure corners of the Internet where mention of the Duck can still inflame passions. Here's the deal . . .

My original conceit for Mom's Cancer was that my family would look like people but everyone else would be depicted as animals or objects that somehow symbolized their personalities, a la Animal Farm or Alice in Wonderland. I drew this osteopath as a duck because she was . . . a quack (for my international readers, that's American for "incompetent"). The problem was that there weren't many other characters, and this symbolism idea didn't seem appropriate for the next one. Or the next. After a while, the only non-human character in the story was the Duck, and people reading it for the first time began to ask, "Uh, what's up with that?" Later, when no one else had been drawn as an animal and I hinted that I might change her into a human for the book, fans of the Duck erupted in outrage (i.e., politely voiced mild disagreement). I think I made the right decision, but I gave her a little lapel pin as a nod of respect to her champions.

I'm telling the Duck story to suggest that character design doesn't stand alone. If I'd followed my first inclination, the characters in Mom's Cancer might've looked like gloomy gargoyles; if I'd followed my second, a barnyard menagerie. The type of story and the style with which it's told define the universe your characters inhabit, and directly affect their design. Your people have to live in the world you create.

Finally, the Duck has her day. In the words of my beloved Ruth, or somebody's beloved Ruth, "My mind has long been gnawed by the cankering tooth of mystery. Better have it out at once!"

(And I had noted the family resemblance before, but never been quite as aware of how strong your mother's genes were in shaping your sisters' faces. A challenge in depicting them with some accuracy but making them distinct, and well handled!)

More seriously, this is a wonderful post, Brian. Thank you.

Nice quote and good point, Mike. We all also had to look like we were related. I appreciate the compliment.

Same to you, Sherwood, mighty champion of the Duck. I always felt I'd let you down but, on the Duck's behalf, thanks for sticking up for her.

At least I can console myself with the fact that the Duck lives on in MY copy of Mom's Cancer.

love your "how I approach cartooning" posts. The evolution of the work is entertaining, and the hows and whys of your cartooning is helpful to me. You point out things that many "how to cartoon" books gloss over. I appreciate the help!

*I'd heard of the fabled duck and wondered how on earth it fit in. Now I know.

*I noticed your Mom's posture right away when I read Mom's Cancer. A friend had gone through chemotherapy earlier that year and I remember thinking I know that slump!

(Same comment as the one I deleted, sans typos. Sorry about that)

That Garfield progression looks very inaccurate. While he did go through quite a change in his formative years, Garfield has actually maintained a strict and constant model design for over 25 years now - that drawing for 1988 is more like 1982 Garfield. I don't even know where those 1992 and 1996 designs came from because those look more mid-'80s, and the 2000 Garfield resembles (more or less) the same Garfield since 1990 or so. Sorry, it's just bothering me. :)

Appreciate the feedback, Trevour. I didn't originate that graphic and don't know now where it came from, but I'll be more careful about using it in the future. It's good to hear from a Garfield fan!