Brian Has Left the Building 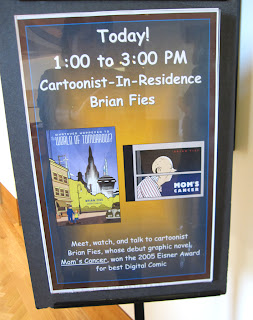 What a good day.

I think my Cartoonist-in-Residence stint at the Charles M. Schulz Museum and Research Center went quite well. After a quick lunch at The Warm Puppy Cafe in Mr. Schulz's ice arena, I crossed the street and set up in the museum's classroom. Today was a corporate "family day," which made the place relatively crowded. I brought some pages of original art to display, some slides to show, some books to sell. I also brought pens and a few blank sheets of paper, but the flow of visitors was steady enough that I never actually had time to sit down and draw. Instead, I spent two hours talking to some very nice folks.

My wife Karen, who's indispensible support at things like this, had a previous commitment and couldn't make it until near the end. Luckily our friend Marion showed up, stole my camera and took some nice photos, including those immediately below. Meanwhile, the museum's Education Director Jessica worked determinedly to get my PowerPoint presentation looping on the room's monitor long after I'd given up, and at last succeeded.

My new pal writer/filmmaker/teacher/cartoonist Jason Whiton came, as did several young people including a talented comic-creating brother-sister team, a sixth-grader who drew a dog and cow for me, and a high school student who interviewed me for a Career Day-type project ("How much money do you make?" "None of your business.").

Things got extra-special and even a bit life-altering toward the end, when Jeannie Schulz dropped by to say hello. Jeannie is a lovely lady whom I've been lucky to get to know a bit, but she's never invited me to tour Mr. Schulz's former studio that lies a literal stone's throw from the museum. Until today.


To be clear: after Mr. Schulz died, his studio's drawing table, furnishings, and many of his books and other possessions were installed at the museum, where every visitor can see them set up just as they were. But Mr. Schulz also kept a drawing table, furnishings, art supplies and such at home. It's those that Jeannie has moved into the corner of the studio, making a workspace that's both an artificial re-creation and totally authentic. Because the studio is still part of a working office not open to the public, not many people get to see that.

And I sat in the chair. At the board. The beautiful dark brown board in whose surface we saw dimly wrought letters and pictures from Mr. Schulz's hand. I'm not being metaphorical: we could literally make out actual words and shapes impressed into the wood. The Schulz Museum needs to have an archeologist do a rubbing of that thing.


Many thanks to the generous Jeannie, Jessica, everyone at the museum, and everyone who dropped by to visit this afternoon. You made it a very good day.
.

How fun! Glad you had a good day and sorry I couldn't make it over there. I like your new blog format.

"How much money do you make?"

"On the advice of my attorney I must say that counterfeiting is a crime and is wrong."

Then, lean in conspiratorially and say, "...but.. I think if I can get the inking right on Andrew Jackson's eyebrows just a *little* bit better... nevermind."

Billy, thanks! I'm sure we'll meet up soon.

Jim, funny. The kid was nice, I wasn't really that much of a jerk, and we had a good talk about the many, many different ways to earn money (or not) in comics.

SCENE FROM A MARRIAGE: With Karen, after leaving the museum.

BRIAN: That was really special. I can only think of one chair in the world that it would mean more for me to sit in.

KAREN (without an instant's hesitation): The Enterprise's.

What more could anyone want than a partner to go through life with who knows you that well?

Which Enterprise? I only got to sit in the Captain's chair on the Voyager, but it was pretty comfy. I imagine the Big E's was even comfy-er!

There's only one Captain's chair worth selling one's soul to sit in, Mary. If I need to explain, I'm afraid you and I are through.

Brian this blog entry is awesome!!

what a great day! i'm so glad i could come up and be a part of the adventure. the chair was inspiring (and comfortable!)...

and i totally agree about the OTHER chair :) in contrast, poor spock often had to stoop over his monitor. they hadn't figured on ergonomics yet. was it unmanly/illogical for a vulcan to go to the chiropractor?

Sounds like a grand time was had by all, and I wish the place was just a skosh closer -- but thanks for providing the vicarious experience!

Few things are cooler than being able to touch the artifacts of an icon who's also a personal hero.

You are the man.