In the past week or so, I've had three different people tell me they like reading my blog because it's interesting and funny.

I don't need that kind of pressure.

To give you a break from that high-quality reading experience, I'll shamelessly flog a couple of things.

First up is my publisher Abrams Books' catalog for Fall 2012, which features a full-page ad for the paperback edition of Whatever Happened to the World of Tomorrow. For those disinclined to click on the link and find Page 10, here's how it looks: 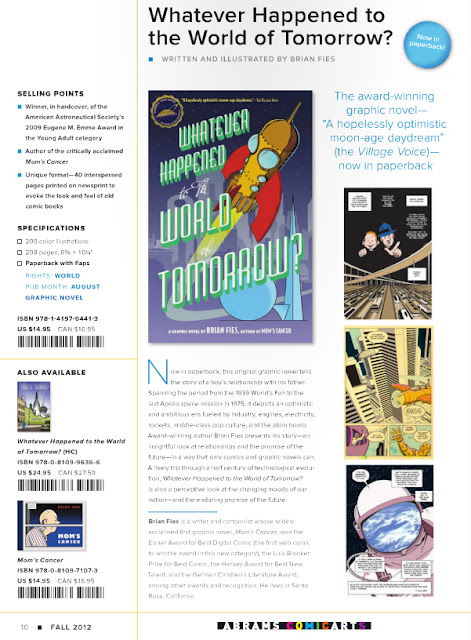 I'm sincerely touched that Editor Charlie and everyone at Abrams had enough faith in WHTTWOT to not only put it out in paperback in the first place, but to dedicate a full page of the catalog to it. They didn't have to do either. I expect I'll have more to say about how the paperback happened and why/how we redesigned the cover in future posts.

Speaking of the cover, that's not the final version of it above. It's close, but the catalog had to go to press before we were done designing it. In fact, Editor Charlie just e-mailed me a photo of the new cover's proof (the first one off the printing press to check for print quality and errors) and I couldn't be happier. Two words: "silver foil." It's gonna look fantastic!

Second, a listing for my contribution to the Team Cul de Sac book to help fund Parkinson's Disease research is now live on the Heritage Auction website. Inspired by "Cul de Sac" comic strip creator Richard Thompson, who has Parkinson's, Chris Sparks gathered artwork from dozens of cartoonists who interpreted Richard's characters in their own styles. In addition, the original art for the book will be auctioned beginning May 27 to raise more money for the cause.

My listing is just below "Calvin & Hobbes" creator's Bill Watterson's. I wish such close proximity somehow reflected the quality of my work, but it appears to be an accidental consequence of "Brian" following "Bill" alphabetically. I'll still take it.

You'll also note that Heritage hasn't posted an image of my drawing (or many others) yet. They're adding them a few at a time. Luckily, you've already seen it. I will be closely watching the auction and am prepared to make a generous face-saving bid on my own page just in case nobody else does. It'll be for two good causes: Parkinson's research and my pride.

If nothing else, please consider buying the book. It's a righteous deed. Plus, as my friend Mike Peterson pointed out, think about what a great autograph album it'd make as you hunt down all the cartoonists who contributed to it. Good luck with Watterson (or as I call him, "Bill").

you're getting what you deserve...