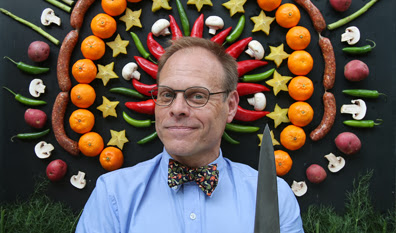 Karen, our daughters, and I had a terrific Friday evening at Alton Brown's "Edible Inevitable" show, now touring the country. If you don't know Mr. Brown, he's hosted several programs on the Food Network over the past 15 or so years, including his own long-running "Good Eats" show and the venerable "Iron Chef America." I can't think of a better way to describe his TV persona than Alton did himself during a Q&A portion of the show, recalling the start of his career when he wrote three phrases on a piece of paper: "Julia Child. Mister Wizard. Monty Python." That's Alton Brown.

The show was good. I don't want to spoil it for anyone who might google up this post, but it includes over-the-top cooking experiments, puppetry videos and music, with Alton proving himself a credible guitarist and saxophonist (backed by a drummer and bassist). He stressed the importance of cooking and eating as a family. He's also very funny with both prepared material and working with the audience on the fly. A dry, sardonic, quick wit.

Just one bit to capture the flavor of the evening: following a song dedicated to the wonder of the Easy-Bake Oven, which young Alton pined for only to be scolded that baking was for girls, Mr. Brown brought out the actual 1960s' Easy-Bake Oven, powered by a 100-watt light bulb, that he finally bought with his own allowance. 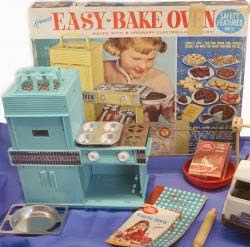 Now that he's a big-time TV star, how could he take the Easy-Bake to the next level while, perhaps, proving all the sexist naysayers wrong? Why, by wheeling out a two-story tall Mega-Bake Oven powered by 56,000 watts of concert lighting and inviting a volunteer on stage to help him bake a pizza in three minutes at 600 degrees.

I'm about the same age as Alton, love to cook, and shared his experience of being a boy not sure that was a manly thing to do. My sister and I watched cooking shows for fun (I particularly remember Graham Kerr, the Galloping Gourmet) and Mom dutifully submitted to our experiments. I also shared my sister's Easy-Bake Oven.

I have a vivid memory of being 6 or 7 years old and going to some sort of 4-H demonstration in an auditorium at which boys--and not just any boys, but rugged critter-corraling ranch boys!--showed off their cooking and baking skills. I think the idea was that if you were going to raise, slaughter and butcher it, you'd better know how to cook it, too. That was all the permission I needed. If it was good enough for strapping country lads, it was good enough for me. I fed myself through college and, as the work-at-home member of my family, do more than half the cooking now.

That said, I'm no expert or "foodie." I'd call myself a confident home cook who enjoys the process. I'll try anything. I make a good béchamel. I think the great value of the types of TV programs Alton does is that they encourage people to try. It's not that hard; give it a shot; what's the worst that could happen?

OK, "fire" could happen. That would be bad.

Forget what I said. Kitchens are a death trap.

Our girls left home as adventurous eaters and cooks. I think one of the essential life skills parents owe their children of either sex is being able to handle themselves in the kitchen. Cook with them, bake with them, and shove them out the door confident they're set to survive on better than fast food and Ramen. They, their friends, and the world will thank you.