As I mentioned yesterday, the point of my 90-minute "See One, Do One, Teach One" workshop at the Baltimore Comics & Medicine Conference was to give participants the confidence to go out and make their own comics, and perhaps teach other people to do the same. The four dozen people who did the workshop played along gamely; I thought it was only fair to do the same.

I opened the workshop by asking them to write down a short anecdote about something that'd happened to them recently. Funny, frustrating, sad. To prompt them, I suggested making it the first thing they'd tell someone when they called home that night. "Hey, you won't believe what happened to me...." I didn't play coy; I warned them they'd be drawing it later.

After talking about some theories of character design, I asked them to draw their own cartoon self-portrait, as well as one of the other characters in their story (if there were any). I only gave them a few minutes, so they had to be spontaneous and messy.

Later still, after going over some of the iconography and structure (i.e., panels, balloons) of comics, I asked them to make a comic of their stories. I gave them four blank panels as a jump start, but emphasized they didn't need to use all or any of them. I then asked for brave volunteers to share their work with the group. Several did. The results were some remarkably good comics!

While the participants were doing my exercises, so was I. In fairness, since I knew the questions were coming, I had some time to think and prepare. But I didn't cheat much. An event happened to me and I thought, "That's funny! That's what I'll make my comic about." However, I didn't script or sketch it out beforehand. I wrote and drew it in the same seven or eight minutes everyone else got.

Here's mine, which is more or less a true story:


What I'd planned to do in the workshop was analyze and critique my own comic as I (gently) did theirs, to explain what I'd been thinking and maybe should have done differently. In the moment, I thought that looking at the participants' comics was going so well, and they were so eager to share, that we ran out of time for me to critique my own (although I did show it). Here's what I would have said. 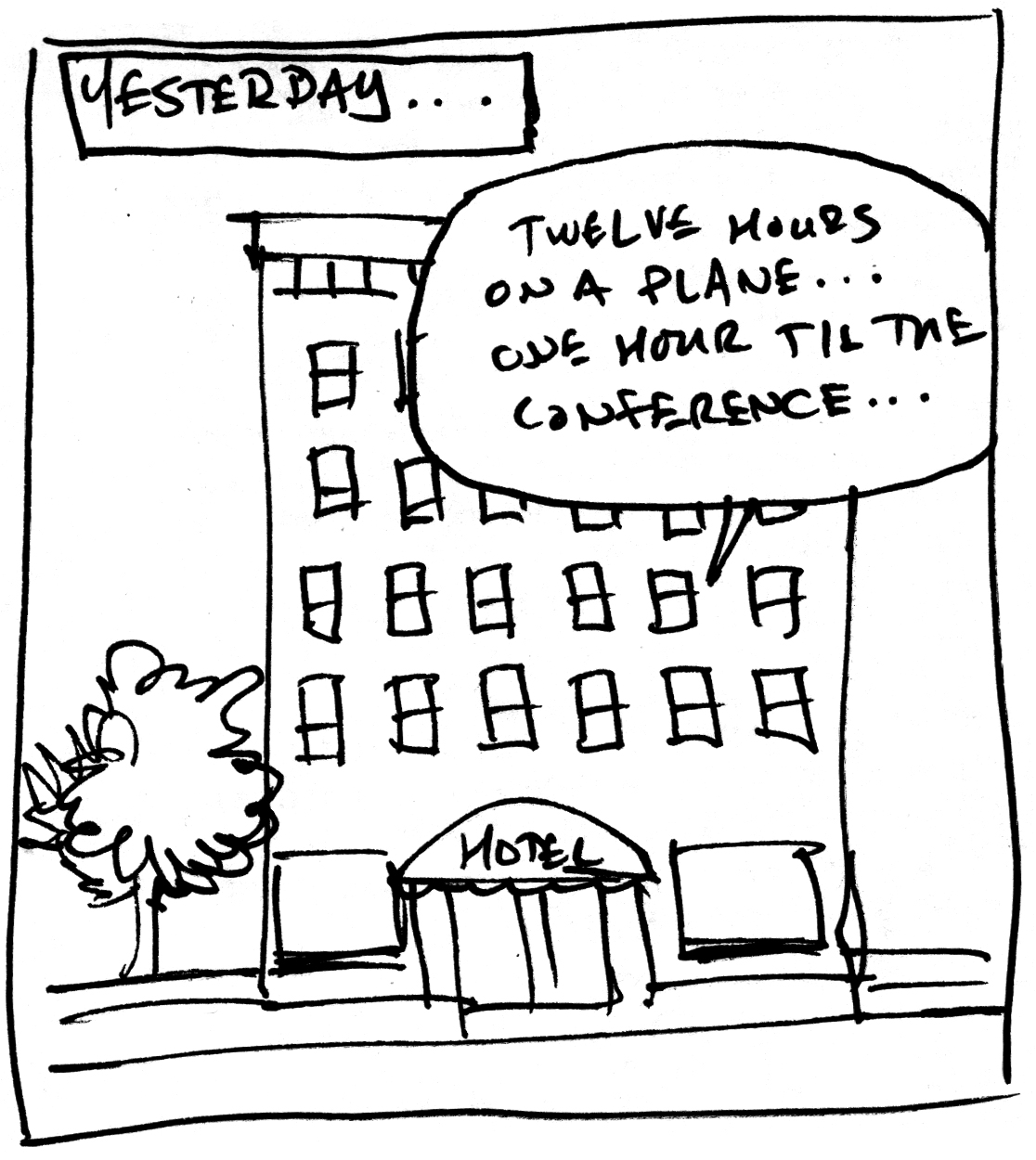 Omniscient narrator captions can be a crutch, but saying "Yesterday" gives us important information we couldn't get any other way. Just don't overuse them to explain action your characters should be doing. Show, don't tell.

This panel shows the exterior of my hotel, helpfully labeled. In film terms it's an "establishing shot." Now we know when and where we are. We don't know who's saying the dialog but we don't need to yet, as long as the next panel makes it clear. In fact, the uncertainty kind of urges us on to find out. 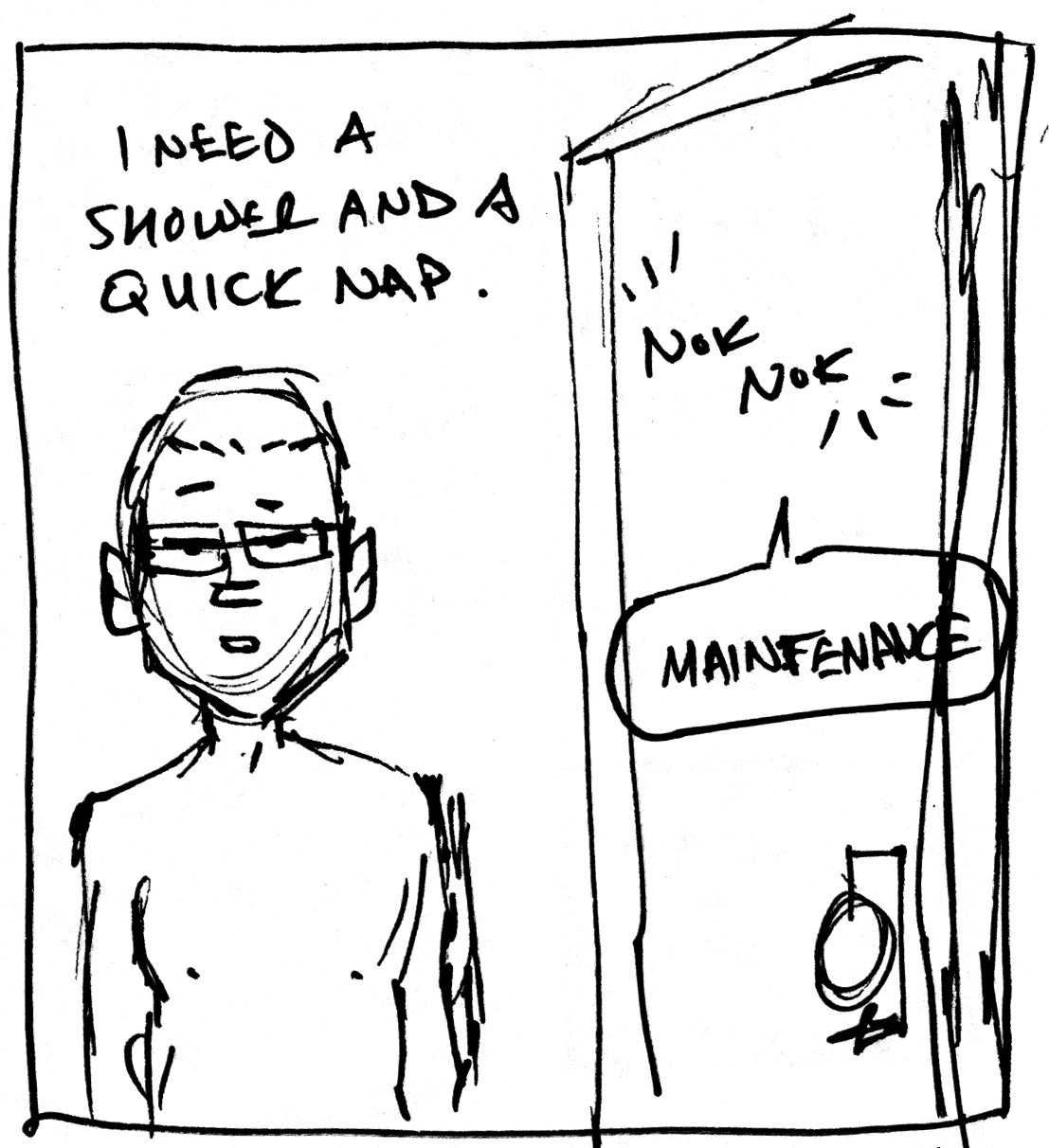 I made a small mistake and a big mistake in this panel. The small mistake was that, after emphasizing to the workshop participants that they must place the words on the page before the art, I didn't plan ahead for the word "Maintenance." The big mistake was drawing myself shirtless (BTW, my actual physique is much less lumpy). That gives away the gag to come in Panel 4. I should have obscured it by perhaps drawing a close-up of my face, or otherwise hiding my state of undress. 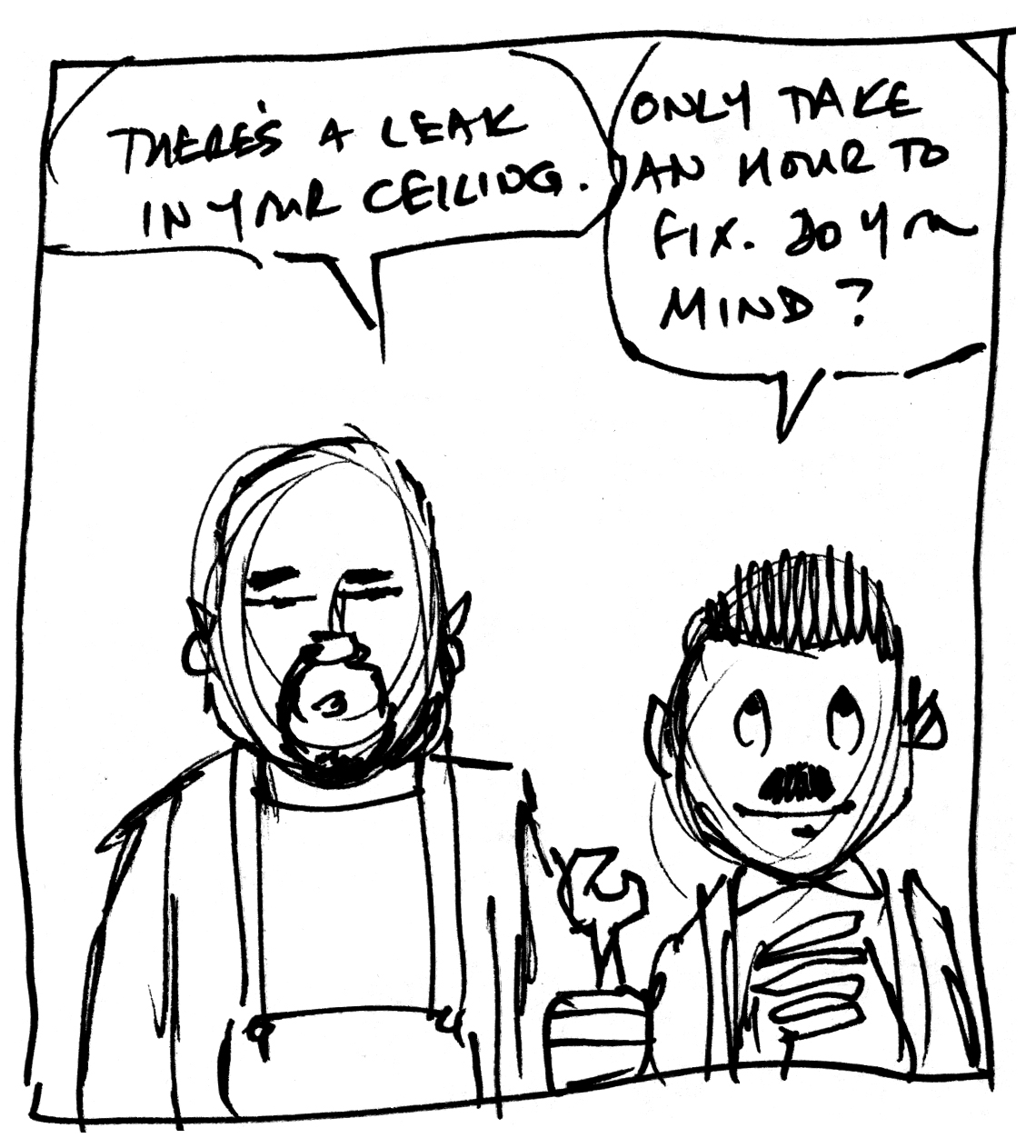 I could have drawn a door frame to make it clear that they're the ones who knocked. I made an effort with the two handymen to contrast their physical design and attitudes. One is burly and gruff, the other is small and apologetic. That's an exaggeration of the actual handymen, but essentially true. I think I did a good job designing these guys. Readers of my "Last Mechanical Monster" webcomic may notice that the big one looks like my character Ted the bus driver. In real life, I noticed that he sort of did! A lot of cartoonists have a repertory company of stock characters to draw on, and since I've been drawing Ted for more than a year now, I drafted him for this demo. 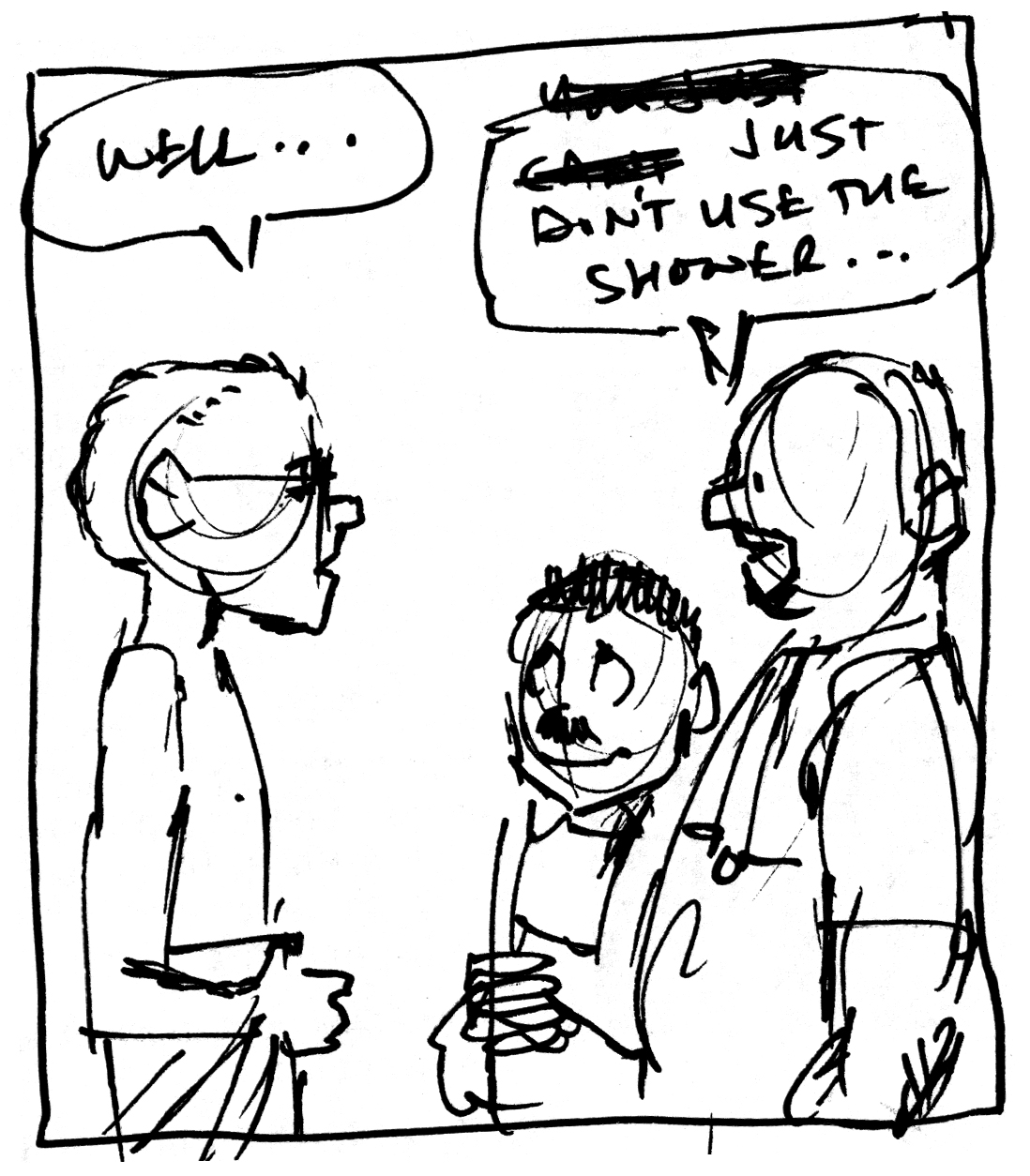 If I hadn't telegraphed the gag in Panel 2, I'd be real happy with this towel-wrapped payoff in Panel 4. However, aside from obviously rewriting the dialog on the fly, I made a mistake in this panel that I consider serious: I switched the positions of the handymen. A moment ago, Burly Guy was on the left, now he's on the right. If I'd done that on a real project, I'd redraw it.

This is how I think when I'm drawing thumbnail sketches and laying out a page. These are basic elements of Storytelling that make creating comics different from drawing pretty pin-up pictures. If you're reading a comic and don't ever have to stop and think about what order you should read the panels in, where the action is taking place, which character is which, what the characters are doing, or how they got from here in Panel 2 to there in Panel 3, the cartoonist is doing a good job.

Which is to say: in my philosophy (which not everyone shares), the best cartooning is the cartooning you don't notice at all.

I enjoyed the workshop very much and learned a lot, but this post is super helpful. I'm glad to know how you think about revisions and storytelling. I look forward to following the blog here.

Sharon, thanks a lot for coming to the workshop and commenting here. I hope the conference was a good one for you!

This is a fascinating way to teach drawing a sequential story. As usual, I am impressed with you barking all, literally and figuratively, by tearing part your own comics' strengths and weaknesses. This is why Fies Files is a must-bookmark site.

Re:"barking all:" I don't know why the damn spellcheck changed it. I meant to say showing all, NOT barking all.

Obviously, one of my weaknesses is not enough proofreading.

I'd love to sit in on one of your classes someday, Mike, properly proofread or not. Thanks for the note, my friend, it means a lot coming from you.

"...saying "Yesterday" gives us important information we couldn't get any other way."

Can you clarify why you feel it's necessary to provide this info in this comic?

First, I don't know why the day matters in this story. As part of a larger story, maybe, but it could have been last month, and the joke would still stand.

Second, you're already providing information about the day in the word balloon: it's right after the flight, and right before the conference.

Thanks for the behind-the-scenes look at your process. It's fun to see design choices and the reasoning behind them!

Tim, first, it's great to hear from you once in a while!

You raise a good point about "Yesterday." It was only important in the context of this comic because the exercise was to tell an autobio story about something that'd happened to you recently. Otherwise, probably not, although I think some context is needed. Who's this guy, why's he in this hotel? The people in my workshop already knew that.

I was also (if I'd had the time to explain to the class) making a point about minimizing reliance on captions, while still demonstrating how they might be used. For example, I could've easily written a caption that read "After 12 hours of travel I had one hour to get ready for the conference." But it's better to put those words into a character's mouth, I think. The narrator should stay out of the way.

And you may be right; maybe he wasn't needed at all. It seemed like a good idea at the time... ;-)