How I Approach Cartooning #2: History

One of what I intend to be a series of occasional essays on what I think about when I'm writing and drawing. I'm not saying this is the best way, right way, or only way. It's just a way that works for me that I hope someone finds interesting.

The story of Whatever Happened to the World of Tomorrow? covers more than three decades, from the late 1930s to the mid 1970s (plus a bit beyond). This raised a problem I'd never really dealt with before: doing historical research for a graphic novel.

Both the beauty and horror of writing a graphic novel is that nothing gets on the page by accident. If there's a person, car, rock, tree, trash can, or blade of grass in the picture, it's there because I wanted it there. This turns out to be a significant challenge when you go back in time. I struggled mightily to leave all my modern preconceptions behind and find references for everything I could. My characters drink soda pop in 1939; what shape and size were soda bottles then? What did a street light look like in 1945? When did kids start wearing high-top sneakers? What day and time did a particular TV show air, and what phase was the Moon in that day?

I collected probably a couple thousand pages of reference and read hundreds of pages more. I discovered that one problem with trying to get it right (and being terrified of getting it wrong) is potential paralysis: being afraid to do anything for fear that it isn't perfect. Eventually, I just figured I'd have to live with getting the big stuff as right as possible and minimize the risk of flubbing the small stuff as best I could. After absorbing all the research I could manage, I had to kind of relax, let it go, and just start to draw.

I tried to be thoughtful about my sources. For example, researching period clothing yields a lot of old magazine fashion spreads. But everyday people don't dress like fashion models then or now. Better are actual news or candid photos of the time showing real people living real lives. It's also tempting to look up "1945 automobiles" or "1965 business suits" and use the first examples you find. But nobody buys a new car or wardrobe every year. People drive 10-year-old cars and wear 5-year-old clothes. Few houses have all-new furnishings; right now in my living room I've got a 10-year-old couch and a 90-year-old record player. The people and places I draw should look that real and lived in.

Two examples of how that works in WHTTWOT: One panel is a big overhead shot of a kid's bedroom in 1965. Now, kid's bedrooms are often furnished with family hand-me-downs, so when I put a radio near the kid's bed I made it a small tube-powered model built in the mid 1950s (the same one I have in my bedroom passed down from my father-in-law). A chair in the corner of the kid's room--you know, that extra chair that doesn't fit around the dining room table so you stash it in the bedroom--is from a set made in the 1950s.

Also in the 1965 chapter, I put my characters in a '57 Chevy. That was a risk. First, as I've written before, I don't draw cars well, nor do I enjoy it. Not sure what I was thinking when I scripted a road trip. Second, the '57 Chevy is an all-time great classic car with legions of fans who know every bolt. (Digression: I was recently admiring a '57 Chevy in a parking lot when my wife Karen remarked that she'd had a friend in high school who'd owned one. "Oh, was he a classic car guy?" I innocently asked. "Not really," she answered. "Back then it wasn't really classic. It was just old." Ouch. Since Karen is younger than I am, I instantly felt positively antique.)

Despite the peril, I had both practical and creative reasons for picking the '57 Chevy. Practically, it was easy to find a good toy model and tons of reference photos for it (period photos only, since modern examples of the car often have subtle modifications I wouldn't want to accidentally include). Creatively, the car is strongly evocative of its time. And putting my 1965 characters in a 1957 Chevy said something about them: they had an eye for style and couldn't afford a newer car. They're middle or lower-middle class; an 8-year-old car is the best they could do, but they picked a good one.

I don't know if any of this will come across to the reader. I suspect not, but hope it accumulates into a kind of verisimilitude that makes the world of WHTTWOT seem more real than if I hadn't gone to the effort and just made it all up. I'm also positive that as soon as the book comes out I'll start hearing from readers telling me what I got wrong. I expect to know the anguish experienced by Cold Mountain author Charles Frazier when he discovered he'd made his Civil-War-era hero eat a variety of apple that hadn't been hybridized yet.

All I can answer is that I honestly did my best and if I tried any harder I wouldn't have been able to produce the book at all. 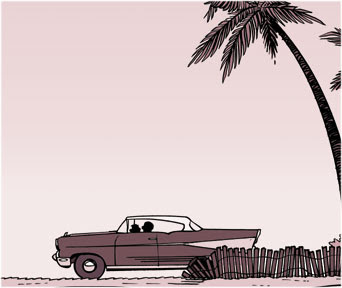 This rings true to me, certainly. For several years, I did the "Lookback" feature with snippets from the newspapers of 25, 50, 75 and 100 years ago, and found that the reality of original news sources can be very revealing when what you have had before was nostalgia and history -- it's very different when it's being recorded by people who don't know how it's going to come out, and I think that's an invaluable key to knowing what it was like to live at that moment.

Even then, you have to be selective: The iconic photo of the sailor kissing the girl on VE-Day has become the collective memory of that day -- but what was the moment like for someone who was in school, at work or ... good grief ... overseas in a combat zone rather than in Times Square? That photo didn't appear in papers at the time, so go back and see what they were able to record of the day in Cedar Rapids or Pensacola. That's the real history of the moment.