Well, my day is made!

I just got a package from Editor Charlie bringing me the German edition of WHTTWOT, titled Und Wir Träumten Von Der Zukunft ("And We Dreamed About the Future"), which I think is a pretty swell title. Here's how she looks: 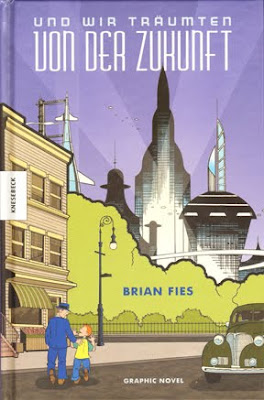 I blogged a while back about preparing the art for this edition--basically layering my Photoshop files so all the English could be easily stripped and replaced with German. On first read-through, I think the publisher Knesebeck (which also put out the German edition of Mom's Cancer) did a good job of it. They ably inserted cheap newsprint for the "Space Age Adventures" comics-within-the-comic, which is the tricky part. The cover doesn't have the same wrap-around paper "belly band" jacket as the original, but they were able to capture a similar feel by applying a glossy varnish to the "futuristic" half of the image above. It works well, and if/when we do a U.S. paperback we might use the same trick ourselves. I also took the opportunity to repair a few flaws, which I suppose makes this the most definitive version to date.

I think this is pretty cool! Many thanks to Knesebeck for taking on my book and doing such a nice, thoughtful job with it.

I confess that I speak not a whit of German, yet my first look leads me to read the book's front cover: (using English placement and such and such, and with a tiny, tiny knowledge of German, to read thusly:

Which actually wouldnt've been a bad title for the English edition.

It will be interesting to see how this does in Germany, given that it is such a strong reflection both of American aspirations and American pop culture. And I'm not saying that cynically -- graphic memoirs like Maus and Persepolis have done very well in the international market despite being anchored in particular cultures.

"The World of Tomorrow:
WHAT THE #@$%?"
Which actually wouldnt've been a bad title for the English edition.