I just read a great article on Wired.uk about a group of tech wizards and investors dedicated to resurrecting Polaroid film. You may recall that Polaroid discontinued its instant camera and film production in 2007. Stockpiles of the old film are almost gone. The article describes how the man in charge of scrapping the machinery used to make the film packs was instead convinced by a passionate Polaroid fan to save them, and ended up putting together a team of experienced Polaroid hands to revive the factory and manufacture the film themselves.

The thing about Polaroid is that it's more than the sum of camera plus film. It's also society and culture and art, as evocative of an era and lifestyle as a hula hoop or Atari 2600. As an artistic medium, Polaroid photography provides a look and feel no digital medium can duplicate. Plus, in today's era of digital manipulation, a Polaroid image is absolutely authentic, one of a kind, and impossible to trick. What the camera sees is what you get. The article aptly compares Polaroid film and cameras to vinyl records and turntables. Imperfection is part of the charm. No one expects Polaroid to be the commercial giant it once was, but the new investors think they can turn a profit with a business about one-tenth the size of the old one.

What made this story blogworthy for me was that the new company, which calls itself "The Impossible Project," has contacted my friend Paul Giambarba to help them. I've written about Paul before; he designed the original branding and packaging that made Polaroid the hottest product of its day. Everything Apple is doing today to convince you that it's the hip young alternative to stodgy old PCs was pioneered by Polaroid (vis a vis Kodak). My buddy Paul helped invent that strategy. He says it feels good to be back in the saddle again, and I don't think The Impossible Project could have made a smarter hire. 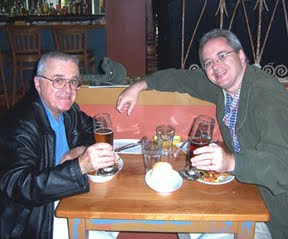 Enjoying a couple of cold ones over lunch with Paul, 2006 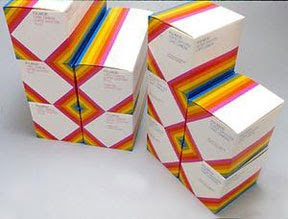 A sample of Paul's work for Polaroid: boxes full of wonder and joy. If you're of a certain age, one look at that clean, clever rainbow striping is extremely evocative. See what I mean about Apple? Somebody there is an attentive student of the School of Giambarba.
.
And here's a glimpse of Paul on a segment about Polaroid done in early 2008 for the CBS Sunday News. This was broadcast just after Polaroid announced it was going out of business and before anyone had stepped up to revive it. Just a note that the corporate weasel at the end, Tom Petters, was subsequently busted by the FBI for alleged involvement in a $100 million investment fraud. Sorry about all the superimposed type on this version ("No More Polaroid Film!" and so forth), it was put there by a fervid fan and wasn't in the original.


If you're interested in Paul's work or the history of 20th century design in general, check out Paul's blog. It contains more information, experience, and wisdom than you'll often find gathered in one place. For a not-so-tall man Paul is a giant, and I'm proud to know him.
.
Posted by Brian Fies at 9:11 AM

Congratulations on your new book, Brian, and whoa, I don't recognize myself! Many thanks for your kindness. One of these days we'll have to get together again in Santa Rosa.

This is exciting! Strange thins is that I just read that Wired article as well -- thanks to Paul alerting me to it. Thanks for giving people the background on this.

You introduce me at random times to the most interesting things!

It's true - there is something special about Polaroid prints, something irreproducible using other media.

We have two Polaroid cameras and would happily buy film to take them out of the dusty drawer and use them again. I wish them every success.

Wow. I thought I was the last one still using a Polaroid camera:

Fuji still makes instant film that will fit (some, older) Polaroid cameras. And little kids think Polaroid cameras are magic ... I think something about them seems more mysterious and wonderful than digital pictures, which are kind of "ho-hum": "Sure you can take a 10-megapixel image and save it in 1/100th of a second, but can you get film-developer goo all over my fingers?"