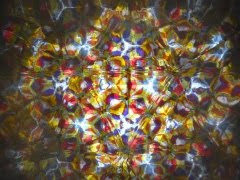 My world, welcome to it.
Starting when I was in my early thirties, I've had one or two migraine attacks per year. The headaches aren't unbearable, and I've learned that if I take a megadose of Advil when I first feel one coming on I can avoid most of the pain. Instead, I just go blind.

Perhaps I overdramatize. Not literally blind--I can still walk around without bumping into walls, and could read a book or drive a car if I really had to. But my visual perception gets very distorted, like looking through a kaleidoscope. Sometimes the world goes all pointillist on me: objects break up into vibrating dots, as if Scotty were beaming them aboard the Enterprise. Other times, a glowing, vibrating, transparent crystalline shape parks itself right in my center of vision and dances around to refract whatever I'm focusing on. As the episode progresses the shape changes, usually growing to form a distorting ring with a clear center.
. 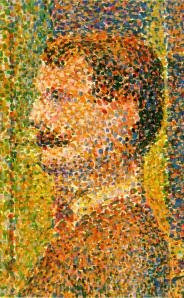 The first time it happened, I was working in a laboratory and was terrified, thinking I'd gotten a whiff of some bad fumes. These days, my migraines are kind of an annoying curiosity. I notice the little distortion zone forming, check to make sure I'm seeing it with both eyes (yep), slug down some Advil, and resign myself to wasting the next couple of hours lying with my eyes closed and waiting for it to go away. It can be almost enjoyable, watching the pretty light show and trying to map the dancing colors and shapes--a little neurological self-experiment. The effect is called an "aura," and it's easy to imagine that in an earlier era it would have been quite the spiritual experience. Eventually it fades, and I'm left with a diffuse ache behind my eyes and a dark gray nimbus brain-cloud that usually lingers until the next morning.

I knew a girl in college who got migraines--really painful ones. I admit I thought she was quite the drama queen, swooning and moaning and retreating to her room with the curtains drawn. I regret my lack of compassion. These things are your brain turning against itself, man, and can be very nasty and scary. Compared to many, I get off light.
.
Why mention it now? Because today's my lucky day.
.
* * *
.
Speaking of beaming aboard the Enterprise, Karen and I watched the 2009 movie Star Trek a couple days ago, for the first time since we saw it in the theater. Karen said she got more out of it this time. I found that the things I liked about it the first time I liked even more, while the things that bugged me about it the first time bugged me even more. Loved the characters (for the most part), hated the contrivances and plot holes. On balance, I stand by my review in May and grade it a "B," and just wish J.J. Abrams had given the script one more pass that could've brought it up to an "A."
.
* * *
.
Still speaking of beaming aboard the Enterprise, this is for the three people who I know will appreciate it:
.

Thanks for that Khan/Cordoba mash up. Great stuff!

I saw the TREK on DVD too and I also stand by your review.

LOL. I assume Jim is one of those three. I'll make sure he sees it!

btw, I always found the combination of two Advil plus one Tylenol worked the best for my Killer Headaches. I used to have them regularly, but haven't had any for years! (I'm sure it's just a coincidence that the end of my headaches occurred almost simultaneously with the end of my marriage, and I would NOT recommmend that particular attempt at a cure!)

Simply hilarious, Brian! Never get between Mr. Roarke and his Chrysler Genesis. :)

Not sure if I mentioned it before about the Star Trek reboot movie, but the first crewman on the USS Kelvin with a spoken line ("Captain, we have a visual") is none other than Prof. Randy Pausch, he of the "Last Lecture" series - a great coda to a beautiful life.

I've never had migraine. Sometimes I see and hear weird stuff when I'm dozing off, but that happens to a lot of people.
As for the "Back to the Future" irony you mentioned, I thought of that too not long ago. In the eighties "thirty years ago" seemed fantastically far away...!

I've had many, many migraines. They started in that same lab working near you and lasted for years. Since they completely disappeared in the past year, I'm guessing the cure was to stop eating nightshade vegetables or just the coincidence that I haven't seen much of you :) Cherry cider works too...high in magnesium. Hope you feel better soon.

Mike: All better today, thanks. Of course you're one of the three.

Nancy: I appreciate the headache tips. I'm just not sure how to tell Karen our marriage over.

Jim: I didn't know that about Randy Pausch, thanks for the tidbit. I'd personally find a "Star Trek" cameo a terrific memorial--definitely one for the Bucket List ("Serve aboard a starship: check!").

Namowal: It's just that in 1985, 1955 seemed like such a different, distant era. Except for the Internet, today doesn't seem that different from 1980 at all. I still wear clothes that old! (Hmm. Maybe time to clean out the closet . . .)

Nora: It hadn't occurred to me to blame the lab. Or you. But now that you mention it . . . I appreciate the cherry cider idea, think I'll stock up. I'm glad yours disappeared, I didn't know they did that.

I expect Abrams wishes he had another cut at the script. They were shooting during the Writers Guild strike, so he let them shoot it unchanged.