Sure, it's been nearly a year since I posted Character Design #1, #2, #3 and #4, but what the heck. In preparing to give a workshop on "Designing Distinctive Characters" at this weekend's Alternative Press Expo (APE) in San Francisco, I've been mulling over a topic that I think is interesting but I haven't quite wrapped my brain around, and hope writing about it might help organize my thoughts. I also figure it's unlikely anyone attending the workshop will see this post. But Spoiler Alert!: If you read #1, #2, #3, #4 and #5 in addition to my write-up of the workshop I did at the Graphic Medicine Conference in Chicago, you pretty much don't need to show up to APE at 2 p.m. Sunday.

Today's topic comes out of a life-drawing class I took waaaaay back in college (geez, 30 years ago?!) and changed the way I look at designing and drawing characters. I don't even know what to call it: maybe it's the character's Core or Energy Center. The idea is that every character expresses their personality and pulls their strength from a place that affects how you depict them.

It sounds arty-farty woo-woo, but I've found this idea useful in very practical ways. Imagine you've got a group of characters standing in a boring line, but each is doing something different depending on their Energy Center. One's scratching her head, another's looking off into space, another's digging her toe into the ground, another's got his arms crossed in front of his chest. That's a much more interesting drawing! And if you depict your characters' Energy Centers consistently--if there's a reason this character scratches her chin while that character crosses his arms over his chest--I think over time it helps build their personalities in ways the reader doesn't consciously notice but picks up on anyway.

At the very least, it cues you to draw something more interesting than you might've otherwise thought of.

So far I've been describing a metaphorical Energy Center, but in some situations it can also find very literal expression in how your characters physically move. For example, the superhero Iron Man flies because he's got jets in his boots, whereas Thor flies by being pulled by his magic hammer. Iron Man is propelled from behind, Thor is dragged from ahead; their postures should look very different in flight. Comic book artist John Byrne once described how, when he drew Superman, he imagined he flew thanks to an extra Kryptonian organ in his chest. Now, Byrne never had to explicitly explain that, anymore than you need to reveal in your story what each of your characters' Energy Center is, but it gave him a handle to distinguish his Superman from all the other flying superheroes crowding the skies of Metropolis. 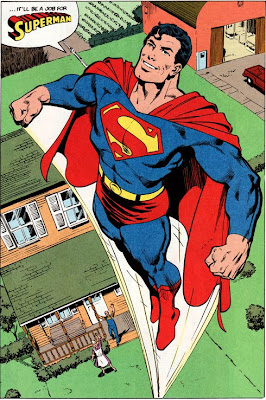 Byrne's Superman leads with his chest.

I think the more broad and cartoony your work is, the more you can play up the Energy Center idea. In my own work, I didn't do much with it in Mom's Cancer, which was a quiet, realistic story without a lot of physical action or extreme expression. In Whatever Happened to the World of Tomorrow, Cap Crater's Energy Center is in the middle of his big barrel chest, the evil Dr. Xandra's is in his brain, while the Cosmic Kid's is about 12 feet in front of him, pulling him forward into action (without always thinking first).

As I said, I've found that identifying an Energy Center can be a very useful part of character design. If I can figure out how to say it right, I'll try to pass it on this Sunday.
.

This is a prime example of one of the main reasons why I am a big fan of your writing: it frequently gives me new ways of looking at things (usually, but not always, visual arts) that I never would have figured out on my own or in the usual course of my days.

I think the more broad and cartoony your work is, the more you can play up the Energy Center idea. -- Then my workplace should be perfect for it. I suspect that I'm going to be spending a good part of the rest of the day trying to figure out where my colleagues' Energy Centers are.

Sincere thanks for that, Sherwood. But I'm not sure it works in real life. I'm not even sure it works in cartoon life. I just figure any edge you can use to bring life to these extremely abstract ink-and-paper people is worth a shot.