I've seen a few sites marking the 143rd birthday of cartoonist Winsor McCay today. Now, I've always thought there was something odd about wishing a dead person a happy birthday, and I don't remember any celebrations of McCay's 142nd or 141st, but for the man who's Number One on my personal "Greatest Cartoonists of All Time" list, that's all the excuse I need.

(Long-time readers may notice bits below cobbled together from very old posts. Forgive me. I'm on deadline, and figure if I already captured a thought once, why reivent the wheel?)

If you're a comics fan who's not familiar with McCay's Little Nemo in Slumberland, you owe it to yourself to get familiar. On a four-color canvas of enormous broadsheet pulp, McCay took his dreamy hero Nemo on the most lavishly illustrated and imaginative adventures in Sunday funnies history. I'm posting a few examples below, and even sizing them as large as I can gives just the merest hint of McCay's fine detail and draftsmanship. 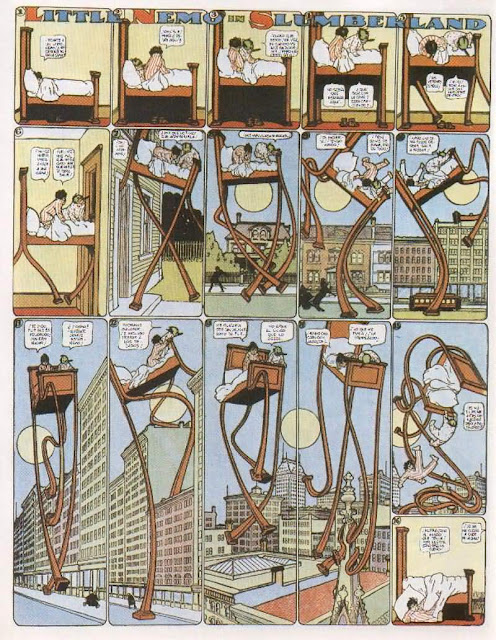 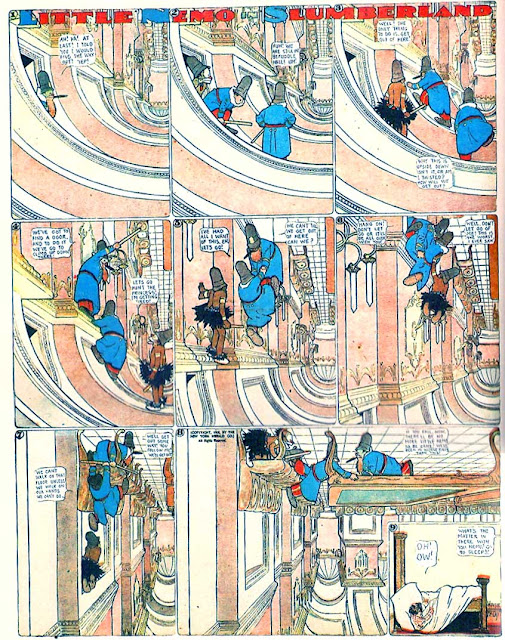 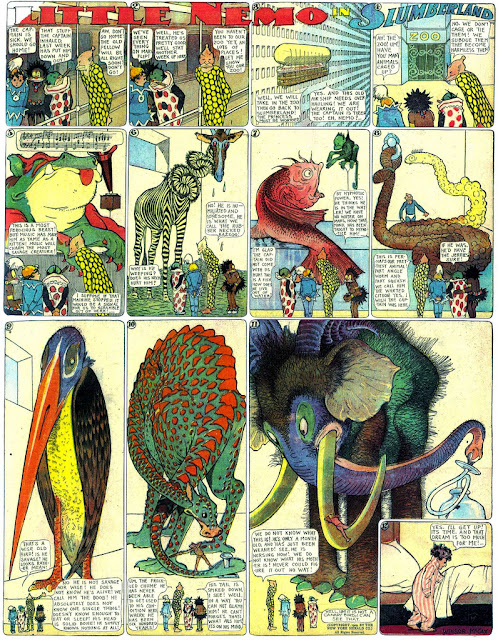 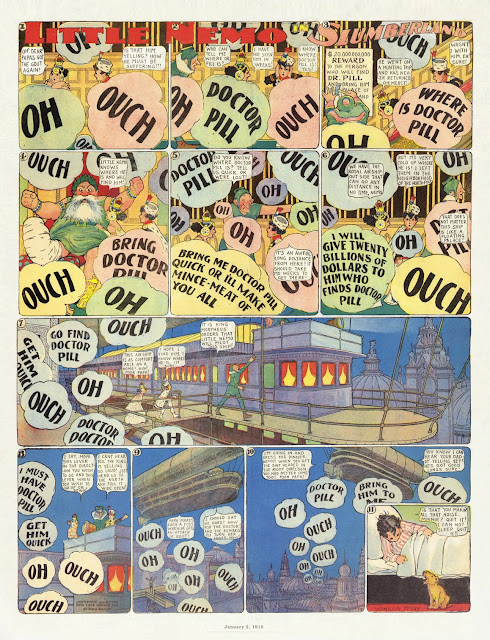 Although I think these comics stand on their own in terms of art and storytelling, some historical perspective helps. McCay did Little Nemo between 1905 and 1914, then briefly revived it from 1924-27. The strip began very soon after the modern newspaper comic was invented (generally, though not uncontroversially, credited to The Yellow Kid in 1895), yet McCay was already doing some very sophisticated formal work. He played with panels, perspective, color--in the last example above, just look at his clever use of word balloons as graphic and narrative elements. If a modern critical darling were doing stuff like that today, he'd be hailed as a genius. McCay did it a century ago. 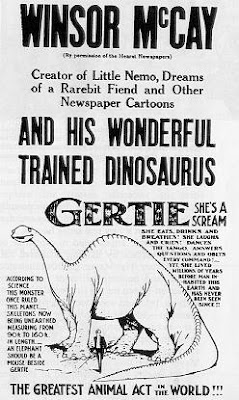 McCay was also a pioneering animator. In 1914, 14 years before Walt Disney's rubber-legged Steamboat Willie, McCay created Gertie the Dinosaur, a creature with volume, mass, and personality. Gertie breathed. As in his comics work, McCay was decades ahead of his time.

McCay used his Gertie movie as part of a live Vaudeville act in which he interacted with the dinosaur on the screen. She did tricks on command. At one point in the performance, McCay threw a pumpkin behind the screen that Gertie caught and ate on-screen. At the conclusion, McCay himself stepped into (behind) the screen and an animated version of the cartoonist took a ride on the beast. By all accounts, the performance was a sensation.

Until the advent of computers, virtually all animation was done on cels, transparent celluloid sheets onto which the characters were inked and painted. Artists only made multiple individual drawings for objects that moved--sometimes an entire figure, sometimes just an arm or mouth. Because cels are transparent, the animators only needed to create one background painting for each scene, on top of which they layered the cels and shot one frame of film. Then they swapped out the bits that moved and shot another frame. Using transparent cels was an enormous time-saver.

In 1914, they hadn't figured that out yet. For Gertie, Winsor McCay and a single assistant hand-drew both character and background in every frame. Every single frame. They redrew every rock, water ripple, and blade of grass thousands of time on 6 x 8-inch (15 x 20 cm) sheets of rice paper that were transparent enough to allow them to trace a master drawing underneath. Then McCay glued each sheet to a piece of cardboard so they all lined up, and shot them.


There are a few hundred original Gertie cels left. I have one.

I had no idea that any Gertie cels had survived until I saw a museum exhibition of the collection of Mark Cohen, a comics collector and agent (whose widow, Rosie McDaniel, I've been lucky enough to know in recent years). I was taking in Cohen's fine examples of artwork from Peanuts, Luann, Cathy and so on, when I turned a corner and saw Gertie--matted, framed and spotlit. As I remember it, I literally went weak at the knees. Gertie immediately shot to the top of both my Bucket List and Grail List. Years passed; although I had the money to buy a Gertie cel, I didn't think I deserved to have one until I was a real cartoonist. The first check I received for Mom's Cancer was my permission slip. 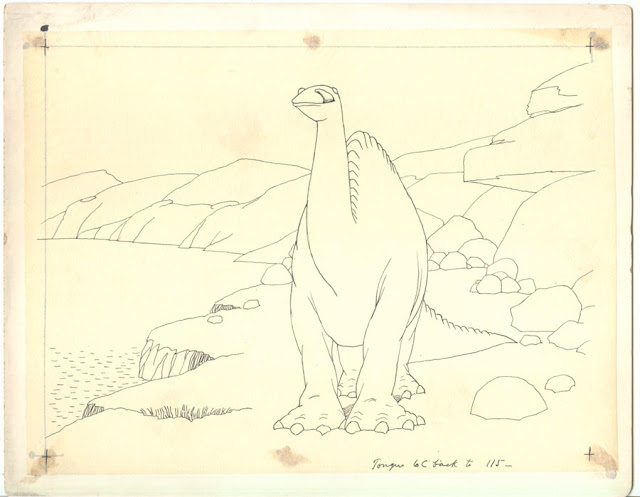 My cel appears at about the 2:37 mark in the clip above, as Gertie licks her lips after eating a tree trunk. In fact it appears twice, as McCay--no dummy--has Gertie lick her lips twice and re-uses the same drawings for each motion.

I really don't consider myself the owner of this Gertie. I'm just renting it from history for a while, and feel a sacred obligation to be its faithful steward. I must say: you know how you get used to things hanging on your wall and, after a while, just walk past them without a look or thought? Well, sometimes I do. But sometimes Gertie still makes me weak in the knees.

Highly Recommend Reading: Two books published by Peter Maresca that reproduce McCay's "Nemo" comics at their original enormous size: Little Nemo in Slumberland: So Many Splendid Sundays, and Little Nemo in Slumberland: Many More Splendid Sundays. More affordable is a terrific McCay bio by John Canemaker, Winsor McCay: His Life and Art (hey, it's an Abrams book!).
Posted by Brian Fies at 4:19 PM

Breathtaking indeed, and I remember your excitement when Gertie's cel came to live with you.

As for me, I'm one of those people who, when he hears "Little Nemo," converts it in his mind to "Little Neuro" and gets to laugh twice.