The Story After the Storm Story

Sunday night The Weather Channel broadcast an episode of "Storm Stories" that included me and others who made it through the northern California firestorms of October 2017. I liked the episode, although I chuckled at some of the melodrama, but that goes with the genre. As I said in my previous post, the producers and crew were very kind and considerate, and that goes a long way toward making me feel great about the whole experience.

First, the interview was not shot in my house. The camera crew of five set up shop in a large, semi-rural B&B about 20 miles south of Santa Rosa. Best I could tell, they also slept and ate there, and outfitted the big living room to be a TV studio. 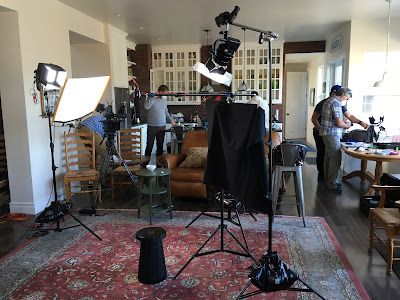 The interview happened in late June, so high Covid season. The crew was careful and diligent. Everyone wore masks the entire time I was there. The camera crew was a good 10 or so feet away from me. When they dabbed a bit of make-up on my face, they had me put on a face shield and then reached under it with gloves on. I slipped off my mask when on camera, then put it right back on when we cut. It felt safe.

I sat on what looks like a log but was actually a sort of ceramic stool, because all the chairs had high backs and they didn't want them peeking over my shoulders. It got uncomfortable. Somewhere is an outtake of me standing up and shaking my butt to get blood back into it. 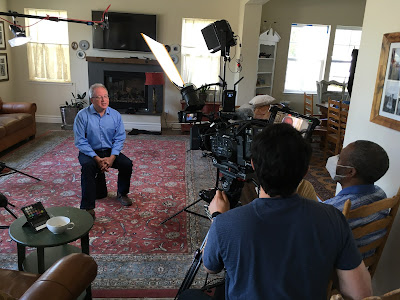 I took two shirts, blue and red. They had me change so that different footage would look like it had been shot on different days. Show-biz magic! I doubt anybody noticed.

I was there a bit more than an hour. The field producer, Mario, was a good interviewer, and in fact got me so relaxed and conversational I said a few things that, upon reflection, I dreaded seeing on TV. So I emailed the producers, explained my worry, and they said "No problem, we don't want you to have any regrets about talking to us so we won't use it," which is extraordinary. They didn't have to do that; I'd already signed the release. That impressed me.

I was also impressed when the producers called me weeks later to fact-check their narration script. That almost never happens.

After the interview was over and I was driving home, I got a frantic phone call. They'd forgotten a very important shot! Could they drive to my house to do it? It was quicker for me to turn around, so I went back. What was this critical footage they so desperately needed?!

It's the one-second intro where I'm looking away from the camera, then my gaze slowly turns to stare directly into the soul of the viewer at home. Which I thought was hilarious. "What'd you do today Brian?" "I turned my head. Dramatically." We did four or five takes on the front porch, and then I went home for real.

I think the episode was very well produced. It was dramatic, but so was the actual firestorm.

I was happy to see my friends Mike Harkins--whose tale of trying to save his neighborhood with a garden hose you may remember from A Fire Story--and Melissa Geissinger, as well as the perspectives of the sheriff's deputy and firefighter. Mike's and Melissa's stories were really the heart of the episode.

I didn't know they would have actors portray Karen and me in dramatic re-enactments. I was disappointed that my actor was old, fat, and slept on the wrong side of the bed. I suppose Brad Pitt was unavailable.

The program broadened my own perspective on a disaster I was in the middle of. I was unexpectedly moved. I hadn't seen most of that fire footage in three years, and some I don't think I've ever seen. Both Karen and I felt a very strong sense of, "My God, we really were in the middle of an inconceivably large and violent disaster and survived it!" Three years of getting by day to day has dulled some of those raw nerves. "Storm Stories" reminded us. If you want to know what it was like, that's kind of it.

I'm happy I did the program, and very much appreciate The Weather Channel and "Storm Stories" coming to tell our story. 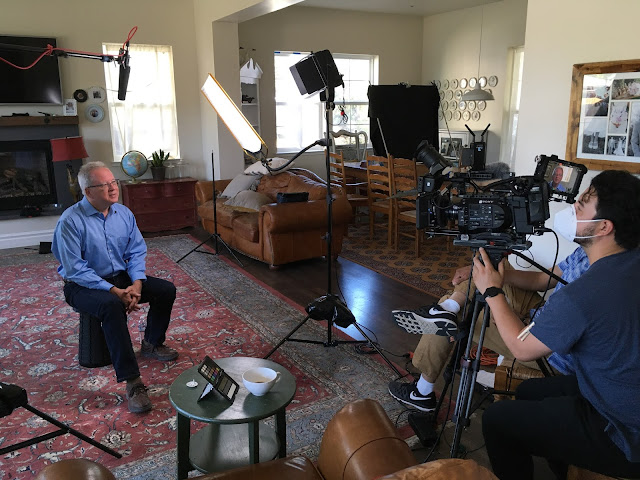