I thought some of you might like this. There's a passage in Whatever Happened to the World of Tomorrow set in 1945 in which my character goes to the movies to watch a Flash-Gordon-style serial. I therefore had to come up with something Flash-Gordon-style to put on the movie screen. For reasons that'll be apparent if (when!) you read the book, I created my own fictional universe-within-a-universe rather than use actual stills from real movies--which also avoided the problem of tracking down 60-year-old copyrights and asking permission.
So first I built a spaceship.
. 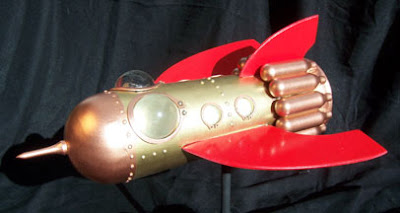 Photo against black backdrop shot in my backyard

The fuselage is a tapered slice of a staircase newel post a little less than a foot long. The nose spike is a golf tee, the rockets in back are spent CO2 cartridges I collected for months, and the windows are solid plastic balls back-painted with a fluorescent paint. Little round-headed nails made good rivets. I wanted it to have a deliberately home-spun look, as if a movie propman on a small budget threw it together from junk lying around his bench. 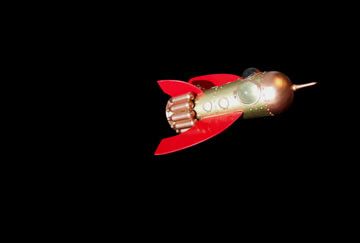 I also wanted a billowing cloud of exhaust shooting out its rear, just like the ol' Flash Gordon ships. For that I found a photo of an actual rocket launch (seemed appropriate) and cropped out everything but the smoke: 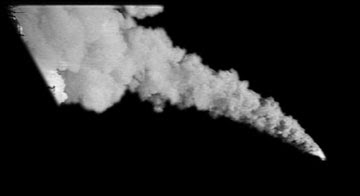 I made stars very simply in Photoshop, scattering white spots of different sizes on a black background and then blurring the heck out of them to get that old-timey unfocused outer space look. I also found a nice Apollo-era Moon photo (Apollo 14, I think) with a crater so fat, bright and lumpy it almost looked phony. One of the minor themes of WHTTWOT is that the creators of old sci-fi films and comic books got a lot of it right, so my little in-joke here is that my 1940s movie serial provides an amazingly accurate preview of the lunar surface no one would see first-hand for another couple of decades.

Then I put the pieces together. I made the exhaust semi-transparent so stars showed through. After flopping the spaceship to move from left to right, I had to do the same to the Moon photo so its shadows would be consistent with the light source on the spaceship. Here's an intermediate step: Since it's a black-and-white serial I converted the image to grayscale and back. Finally, to smooth out the cut-and-paste look and make all the assembled bits seem more like they belonged in the same universe, I washed out and blurred the entire image (I guess the movie projector is just a little out of focus) and overlaid a faint transparent sepia tone over the whole thing. 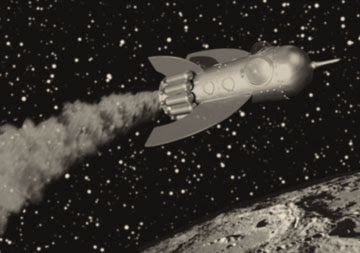 I did a few of these composite images. One of my goals was to make them look fake--I wanted them to look like bad special effects from the era. Then I drew my characters watching these "scenes" on screen, distorting them to account for perspective when needed. I got good mileage out of that spaceship, using it for both photo composites and as a model for actual drawings.

Wow!!! I want to move next door to you so we can build a fleet of these!!!

Cool stuff!
At work I sometimes composite stuff like that smoke, models, green screen stuff, cg stuff and backgrounds... ...but I don't get to make custom space ships. Boo.

BTW, blur really is used (selectively) to help hide the "cut and paste" look you mentioned.

Using a prop space ship for background reference is a smart idea. I bet it really helps with perspective and continuity. And when you're done, you still have a toy!

This is wonderful, Brian, thank you.

I'm now kicking myself for not noticing the carbon dioxide cartridges in the draft -- I had a gas-powered pellet rifle when I was a kid, and used it a lot in the basement (by our fallout shelter!) for target practice in the winters. I used cartridges like those by the dozens, so I really should have noticed them. Maybe I would have if Buddy's model had used them, too, but maybe they weren't around in '45.

Mike, if you and I started building a fleet of these we could just move in together, because I'm pretty sure our wives would leave us.

Nam, wish I knew half the stuff you do. But yeah, there's nothing like a prop to give a drawing that extra bit of weight and "truthiness." Sadly, I have too many toys.

Sherwood, I don't know whether CO2 cartridges were around in 1945 (suspect not), but in the context of the book they didn't have to be. A model-builder could've made the same shapes out of wooden dowels or aluminum rods. The cartridges were just handy. Fortunately, Karen is used to hearing me say things like, "Hey, this'd make a cool spaceship part!" and not even blinking. I'm a lucky man.

When I take the time to google an image I feel like I'm doing in-depth research. Now I fully expect you to reveal that you didn't stop with the model, but went on to film the movie for reference purposes.

Very cool, and I shared it with Husband who said "Very cool!" I agree with "Cartoonist who writes" - I'd almost be surprised if you didn't go on to film the movie. :)

Of course, with Halloween tomorrow, I'm sure you've had much more important projects on your mind...

Mark, sorry to disappoint. I didn't make the movie, but wait until I show you the reference photos I took of me shooting ray guns in my backyard. If I can face the embarrassment.

Ronnie, right now the forecast calls for heavy rain on Halloween. I might get a small break in which to set up, but I expect to be rained out... :-(

Useless but interesting factoids in response to the curiosity of Sherwood Harrington.

The 8 gram cartridges were available during WWII for use in the "Mae West" life-vests,though CO2 inflatable vests had been available to the navy since 1935. I'm absolutely sure the cartridge type was used from 1942 on.

On another note; that spaceship model looks like it could have been from the time period. Great Job.

Hugo, thanks for the info! Interesting and helpful, and yet another example that, for almost every random question, there's someone out there who knows the answer.