I'm Being Followed by a Job Shadow

I spent a very nice few hours this afternoon with An, the job-shadowing high school student I mentioned. I found her talented, engaged, and just a delightful kid. She had good questions. She also had the guts to do something I wouldn't have been able to at her age: show her work to a pro (well, semi-pro).
.
Rather than do an authentic job shadow, since there's nothing particularly exciting going on in my comics job at the moment, I spent some of our time together faking it. That is, I did a drawing just to show her my entire process from putting the first pencil line on the paper to producing colored art ready to go to the printer. I also emphasized that my way was only that, and tried to point out how others might do it differently. 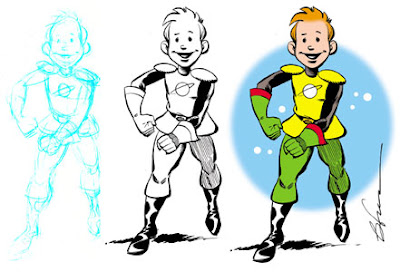 The drawing I did with An, from blue pencil to ink to digital color and camera-ready. She got the original. I don't think I've formally introduced this character to you. He's the Cosmic Kid. He's in my new book.

It's interesting how talking something through illuminates what's important about it. One thing I emphasized was that, no matter how well she draws, there will always be a million people who draw better than her. What will make her stand out, and give her a career in this stuff if it happens for her at all, is telling the stories only she can tell. Readers forgive a lot of shortcomings in skill if they detect genuine passion. I also stressed that I had little good advice about how to "make it in the business." Every successful cartoonist/graphic novelist I've met has a unique story about how they did it. But if she keeps working to improve her skills and puts her work out into the world however she can, I think something will eventually turn up. You sow a thousand seeds to get one blossom. It may not be what she expects, but it'll be exactly the right thing when it happens.

I think that's true. I'm pretty sure it is.

I also told her to consult an attorney before signing any contracts, which isn't as inspirational but may prove more useful in the long run.

I made a big deadline this morning. My girls should arrive home from college for Christmas break in about 15 minutes. It's a good day.
.

She's a lucky student. In a way, she's luckier to shadow a "semi-pro" (although you know you're a pro) than if she got to shadow some Very Famous Cartoonist - you've recently navigated the process of having your work published for the first time (Your graphic novel work, I mean), and all that goes with that (editors and contracts and...) and your knowledge is much more relevant to someone beginning their career track than shadowing someone who was a 'factory' like Lynn Johnston, for example.

Enjoy being a mentor!

Thanks for saying so. I appreciate your point. I think there's kind of a Catch-22 in which someone very successful who really knows the business and might have a ton to teach about it simply wouldn't have the time, at least not one-on-one. More often than not, the people who'd even respond to a request like this are less successful and experienced, and therefore have less to offer. I'm not suffering from any illusions of grandeur; I don't consider myself a real pro (some in my position might, but until I get to write "cartoonist" on my tax forms I don't think I've made the grade) and my student had to Google me.

Still, I like the idea that I could maybe help a young person interested in writing or cartooning get off on the right foot. As you and I discussed before, you never forget the people who did that in your own life.

Interesting you mention Lynn Johnston, who has a reputation for being unusually supportive and nurturing of new talent. She was nice to me once.

Based on the "how I do things" posts you've given us over the years, my bet is that An has hooked up with a very, very fine teacher. You've certainly taught me a thing or ten about cartooning, and I can't draw much more than a breath or a conclusion.

Maybe teaching about anything is like managing a big-league baseball team, in that the best managers are generally men who, as players, had to work really hard to accomplish whatever they did. Big-time playing talents like Ted Williams or Frank Robinson were generally washouts later as managers, because they didn't know what it was like to have to learn their craft.

In any case, it sounds like both you and An had a great interlude. Congrats to both of you.

Maybe I did Lynn a disservice by citing her... I have also read of many examples of her being very kind to beginners, because, she has said, the established cartoonists were so kind to her when she was starting out.

I only meant that her operation has evolved into a relatively large professional workshop which is the exception rather than the rule, and I wonder how well someone in that situation can recall the bread-and-butter issues that matter to a raw beginner.

This sounds like a great program, and An is a lucky, lucky student to get someone like you for a mentor--consciously competent because you just went through the process, and a nice guy besides.