A Serial in 15 Thrilling Chapters 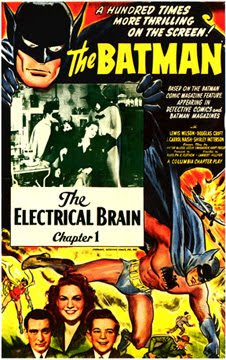 I guarantee that this post contains the most mortifying, embarrassing thing I will ever reveal about myself in this blog.
In Whatever Happened to the World of Tomorrow?, my young hero goes to a movie matinee in 1945 to watch an old-time serial featuring the exploits of his fictional heroes, Cap Crater and the Cosmic Kid. Since a movie needs a movie poster, I set out to create one that had a pulpy retro feel. I also wanted to capture how material adapted from other media often changed dramatically when it was made into movies. Serials didn't spend much on costumes, sets, props, or effects. The characters on the poster needed to sort-of-but-not-really look like the comic book characters they were supposedly based on: 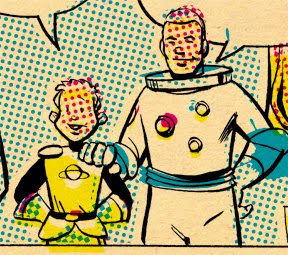 Cap Crater and the Cosmic Kid in the comics, circa 1939
So, partly to lend the poster some verisimilitude and partly to set the art apart from the style of the rest of the book, I wanted to do an actual painting. For that I wanted models. Since I don't know any models, and since I already had the appropriate clothing in my closet and knew the poses I wanted, I set up an auto-timed camera in my backyard and started shooting.
Sigh . . . This next part really hurts . . . 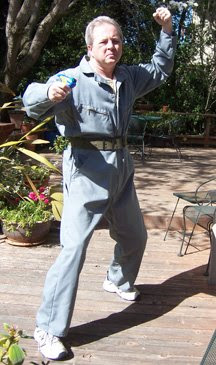 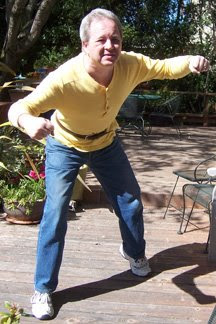 ...and the Cosmic Kid

I shot a couple dozen photos, picked my two favorites, and cropped and combined them in Photoshop: 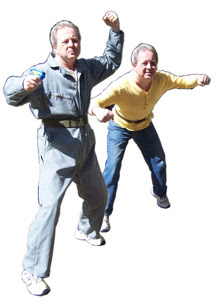 That became the basis for a big (approx. 12 x 18 inches) watercolor painting I did, seen in progress here:
. 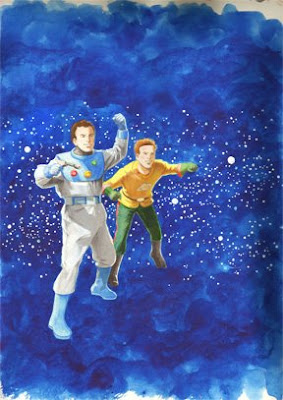 When I finished that, the next step was compositing the titles and fake stills (there's that spaceship again) from my fake movie into the fake poster art. Finally, I popped it into a separate drawing of the poster frame and boy's head: 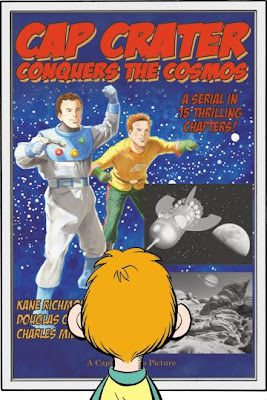 Incidentally, when I designed the poster, I went to quite a bit of effort to research actors who did serials and would have been the right age at the time, and "cast" them in the roles. I didn't foresee that my hero's giant ginger melon-head would cut off the names and make that effort moot. For the record, Kane Richmond played Cap Crater, Douglas Croft played the Cosmic Kid (he was also Robin in the 1943 Batman serial), and Charles Middleton played the villain. I just wanted someone to know that.
Honestly, most of the other 199 pages weren't quite as demanding. And I'm . . . really . . . sorry you had to see that.
.
Posted by Brian Fies at 3:29 PM

It takes a big man to go to such lengths for the authenticity of his art. (And I'm not kidding about that.)

It takes a much bigger man to confess and even illustrate it.

All kidding aside, this post is really a gem. Thank you for having the good humour to share it with us.

Is this bravery, or foolhardiness?

Thanks for sharing this.

Should have just used the photos. They were boss.

(Actually, Lynn Johnston used to shoot Polaroids of her staff acting out FBOFW so she could see the way their arms, legs, heads, etc. moved and lined up. So you're in good company. But she probably burned the Polaroids to avoid just this sort of thing ...)

HA ha ha ha ha ha
Oh boy... Is it weird that I took reference-model shots of myself when I was designing the book?

This took guts, Brian, and I thought it was interesting(and not just the backyard snaps, either)