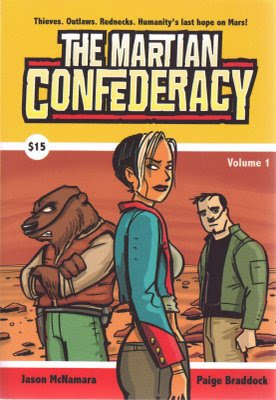 A fitting follow-up to my previous post . . .
What happens after “Boldly going where no man has gone before” becomes “Been there, done that?” Set on a future post-colonial Mars, The Martian Confederacy by Jason McNamara and Paige Braddock offers a fun and imaginative take on the question.

Braddock is the creator of the comic strip Jane’s World, branching out here with a story she conceived and drew, and McNamara plotted and wrote. After living in the same area as Paige for years and knowing people who know her, I finally got to meet her a few weeks ago at a class on graphic novel writing that she and McNamara taught at the Charles M. Schulz Museum. I signed up and got my money’s worth. She was nice enough to give me a copy of The Martian Confederacy on the condition (joking, I think) that I review it, and since I never turned in my evaluation form for their course (sorry) I figured I owed them some feedback.

The story is set on Mars in the year 3535. The red planet has been terraformed to the extent that humans (and bear-people, bug-people, and assorted mutants) can survive with a simple feed of supplemental oxygen, whose supply is controlled by a corporate monopoly. In the 15 centuries between now and then, Mars has gone through a boom and bust cycle of colonization, exploitation, and abandonment. Stripped of its natural resources and bypassed for more attractive destinations elsewhere in the galaxy, the planet is populated by a ragtag bunch of backwater scoundrels, scavengers, and schemers. This is a Mars that might be familiar to those who remember the movie “Total Recall,” with echoes of Mos Eisley, spaghetti Westerns, and “Dukes of Hazzard." McNamara said his story was inspired by the Monroe Doctrine and its effect on Latin America, particularly the exploitation and commoditization of resources such as water. That’s interesting subtext that adds a layer of depth, but isn't necessary to the enjoyment of the book.

The heroes are Boone, a thief and lady’s man with a heart of gold; Lou, an acerbic android fortuitously built to resemble a sexy woman; and Spinner, Boone’s man-bear buddy whose equanimity is a thin veneer covering animal savagery (don’t make him angry; you wouldn’t like him when he’s angry). The villains are the Alcade, who is the only lawman on Mars (think crooked sheriff), and his assistant Sally, whose loyalties depend on whether she’s standing on her hands or feet and who made me think harder than I maybe should've about how her intestinal plumbing works.

The plot is easily described: good guys discover a way to break the oxygen monopoly and bad guys try to stop them. I’m not giving much away, we learn this in the first few pages. The fun of The Martian Confederacy is less in the plot than the environment McNamara and Braddock create and the style with which they do it. To their credit, I think, they don’t really make a serious attempt to forecast the world of 3535 (any more than someone from A.D. 500 could’ve anticipated ours). Spaceships have tailfins like ’59 Cadillacs and shelters look like old Gulfstream trailers. “Planet of the Apes” is studied as actual history and the unit of currency is a “shatner.” Neat bits of world-building flavor and texture are dropped for the reader to piece together. There’s no need to explain why bears can walk upright and talk—the characters accept it, so we do.

McNamara and Braddock tread a thin line between drama and farce pretty well for the most part. I cared about the characters, even if it wasn’t always clear to me if or when I should take their jeopardy seriously. Spinner the man-bear and Lou the android were stand-out characters for me, showing more humanity than the humans. Braddock’s artwork is loose and confident, with a level of detail that clearly establishes characters and place without being fussy, and fits the setting. Mars is mostly a featureless desert; lack of fiddly background detail conveys a sense of big empty spaces. The book is colored throughout in a pinkish-orange palette perfect for the red planet. (Is that a special Pantone color? If so, kudos to Paige for going to the trouble.) I found a couple of typos and stumbled over a plot point or two that downshifted my brain to "Wait, what?" but I won’t point out theirs if they don’t point out mine. And the final few pages of particularly dark humor left me laughing out loud.

The Martian Confederacy is a rollicking light adventure in an intriguing sci-fi universe populated by characters I look forward to seeing developed in sequels, which are in the works. It's a good book by people who teach a good class. More of both would be swell.
.
Posted by Brian Fies at 4:38 PM

Email ThisBlogThis!Share to TwitterShare to FacebookShare to Pinterest
Labels: Reviews

Thanks for the recommendation. This is now on my list of "books to buy to take to Cuba". I always leave them there, at the wee book exchanges at every Cuban hotel or resort, and I always wonder what on earth the staff (who eagerly devour every book left by the tourists) think.