Another in a haphazard and probably tedious series of posts describing what I'm thinking about when working on a graphic novel. Lately I've been giving a lot of thought to building pages, because that's what I've been doing for what I hope will be my third book.

In comics, Space = Time. The length and information density of a passage governs the pace at which the reader takes it in. A page with a lot of words and panels reads slower than a wordless single-panel splash page. In part of my new story, the action advances each day of the week: something happens on Monday, Tuesday, Wednesday, etc. To help convey that regular "sunrise-sunset" passage of time, I'm trying to make each day's episode cover the same number of pages and carry about the same amount of information. I want this part to read like a metronome. Then when I break the pattern, the reader will sense that something has changed.

The English-speaking eye reads a comic page from left to right, top to bottom. Action, and most importantly word balloons, should flow gracefully to guide the reader across and down the page. I do appreciate clever formal flourishes in which weird panel layouts, stylized lettering and so forth convey meaning--I did some in both Mom's Cancer and WHTTWOT--but for me those tricks are only worthwhile if they enhance the story and don't call attention to themselves. If a reader can't follow the action or steps back to think, "Interesting gimmick!" that's bad.

In addition to left-right up-down, you've got the two-page spread to think about: how the left and right pages work together as a unified, composed whole. Then there's the fact that when readers turn the page, their eyes naturally dart ahead to the bottom-right corner of the two-page spread before they start reading at the top left. They can't help it! So if you've got any surprises or big reveals, don't put them on an odd-numbered page! In fact, if I can I like to build some suspense toward the bottom-right to encourage the reader to turn the page and find out what happens next. If I were doing a comics version of that horror movie scene where a startling noise turns out to be an innocent cat, I'd put the startling noise on the bottom-right of one spread and the cat on the top-left of the next. 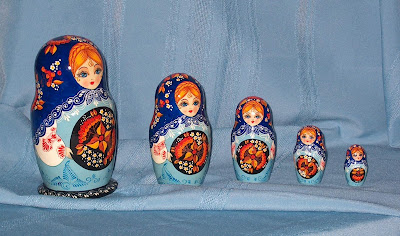 It occurs to me these might sound like very mechanical and formulaic rules. They aren't. First, they're more guidelines than rules (cf. Capt. Jack Sparrow), and second I'm not entirely diligent about applying them. The story always comes first, and sometimes telling the story right requires bending or breaking the rules. But I do believe it strengthens a story to use them when you can, and to know what you're doing when you can't. Your goal is to communicate with readers; the better you understand how they take in information, the more successfully you'll do that.

EDITED TO ADD: I forgot my standard disclaimer: This isn't the only way or the right way. It's just my way. Take what works for you and leave the rest. 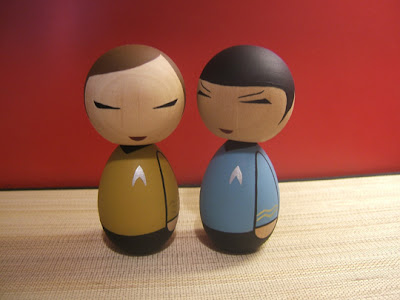 I found this image of Kirk and Spock "kokeshi" while I was googling matryoshka dolls, and couldn't pass it up. I'll apologize for stealing the picture by providing a link to their supplier; just click on the image above.

I finished the first draft of the script for Book Three today. It came out to 150 pages even. I'll read it over a few times, send it off to Editor Charlie, and we'll see how it goes.

"If a reader can't follow the action or steps back to think, "Interesting gimmick!" that's bad."

Agreed.
I think a good cartoonist/storyteller is like a magician. While he performs tricks (using rules, principals, etc..) he does it so seamlessly that the viewer doesn't notice, and instead is fascinated with the show.

All good advice. And I wanna see the draft!!

...And those dolls are strangely adorable... :)