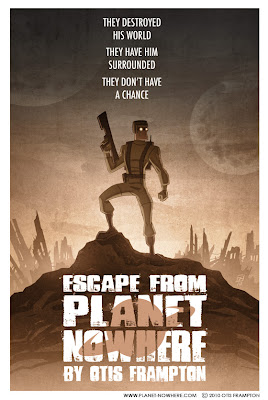 My pal Otis Frampton is starting a new webcomic that looks like it'll be a fun, rollicking, well-crafted adventure. Titled "Escape from Planet Nowhere," the story was inspired by a drawing Otis did for a sketch jam a while back. That link will take you to the story's title page; from there, click "Next" under the image to continue.
(Sketch Jam = a forum where artists gather for fun and exercise. In this particular web forum, a moderator chose a theme for each week and anyone who wanted could draw a picture illustrating that theme and post it for comment. A theme might be something like "rock and roll" or "soldier and child," which I think was the idea that inspired Otis's new comic. I did a few jams while Otis was moderator; if I can find the results and they're not embarrassing, maybe I'll post one or two.)
Otis created a series titled "Oddly Normal" about a spunky green-haired witch-human hybrid trying to survive her teen years as an outcast on two worlds. Originally published a few years back by Viper Comics, Oddly looks like she may find new life in ways I don't think I'm at liberty to discuss. But good ones! Otis is also a prolific sketch card artist (a whole niche of sci-fi/fantasy fandom I didn't know existed until I met him) and always seems to have a half dozen comic and film projects underway. Most nights he hosts a three-hour live webcast of himself at work, showing a level of confidence completely alien to me.
Professionally, what I like about Otis's work are his design, storytelling, and Photoshop chops. Except for his sketch cards, Otis works entirely digitally. Usually that wouldn't appeal to me, but Otis's work is full of energy and life, and he uses the medium thoughtfully and intelligently. I also have a lot of respect for Otis because he neither panders to nor is ashamed to write for a juvenile audience. "Oddly Normal" is made for kids (although there are levels that work for adults as well) and, unlike too many creators, Otis doesn't approach them cynically. Doing kids lit right is hard, and his work is sincere and unapologetic. (That said, I think "Planet Nowhere" is aiming at a slightly more mature audience.)
Personally, Otis was one of the first comics-cartoonist types I got to know when "Mom's Cancer" emerged. I've met a lot of people in the business--some very accomplished, almost all gracious and nice--but there are only maybe a half dozen I'd call friends, which I define as "I have their phone number and if I called they'd be happy to talk to me." He's one, and he and his wife Leigh are good people. If there's any justice, his big break is coming soon. Maybe it's "Planet Nowhere."

very, very enjoyable. what i really like is that his visual sense of story telling infuses the video, which ain't an easy thing to pull off when the focus of the video is yourself!

thanks for this, Brian.

I want that tablet!

It looks like an interesting comic, and I really like the coloring look he achieved through photoshop. It's pretty cool that he came up with the idea while participating in a "sketch jam" (which sounds like kind of an awesome thing itself).

R, everyone I know with a Cintiq tablet loves it. Never tried one myself. I fear I'd be seduced. And sketch jamming is cool, you ought to try it!