And Many Happy Returns

I hope Christmas was great for everyone, and you all survive whatever you have planned for New Year's Eve. I'm thinking bedtime around 11 sounds pretty good.

I've spent the past three days migrating my entire life to a new computer, replacing my former magic box that was six years old and hinting that it couldn't carry on much longer. So far, it's been less frustrating and traumatic than I expected.

Since I tend to keep computers a long time and depend on them for everything, I spent some money and got some upgrades--more memory, a nice video card--that should serve me well for years. In particular, the new box should gracefully handle the art chores for whatever graphic noveling I might do. No more pushing the Photoshop "save" button and then waiting half an hour for my screen to unfreeze (I hope)! I also bought a new monitor with the new computer; right now, I've got both computers running side-by-side, but as soon as I'm convinced I don't need the old one for anything, I'll retire it and set up a dual-monitor station that'll be really cool! Twice the workspace in widescreen Cinemascope, which'll be a big help with both my writing and cartooning.

Below is one of my best Christmas gifts, which should look familiar to anyone who read WHTTWOT: 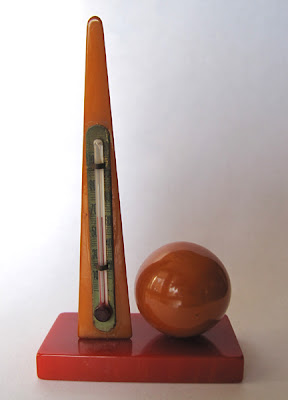 It's a genuine souvenir from the 1939 New York World's Fair, which not only stylishly reproduces the Fair's iconic Trylon and Perisphere attractions in sleek classic Bakelite, but accurately reports the temperature as well. It's small, less than 4 inches tall. My wife Karen and I saw it in an antiques shop months ago. I always keep my eyes open for New York World's Fair trinkets, which are pretty rare on the West Coast, and I thought this one was super-neat but just couldn't justify buying it for myself. So Karen circled around later and did it for me! How cool is that?

I don't want to bore or disgust anyone with a list of my loot, but have to mention that my girls very thoughtfully brought me back a bag of goodies from their summer trip to the Kennedy Space Center in Florida, and our friend Marion surprised me with a kitchen implement I thought was so amazing I once blogged about it. Others were thoughtful and generous as well.

Again, all my best to you, and thanks to all my family, friends and readers. Hello 2012. 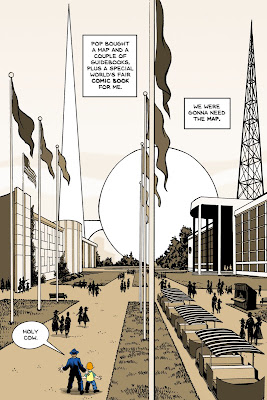 Hope the rest of the migration to the new computer goes smoothly.

Anybody can wish you a Happy New Year, Brian, but only an astronomer can personalize the wish by throwing an extra day in -- so, just for you, 2012 will have *366* days instead of the usual 365.

Also, here's another one for your Perisphere and Trylon collection.

(Aside to ronnie: you know, with a little advance planning, we could have messed with his head a little about this new computer thing by throwing random ASCII characters into both of our comments. Too late.)

The new computer's looking good, thanks. Just switched over to dual-monitors yesterday and don't know how I lived this long without them.

Sherwood, that's a terrific picture--or caption, anyway. Funny, when you start looking for those shapes you see them everywhere.

Don't mess with my head. You'd find it a disappointingly easy challenge.